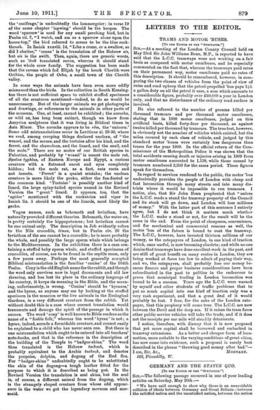 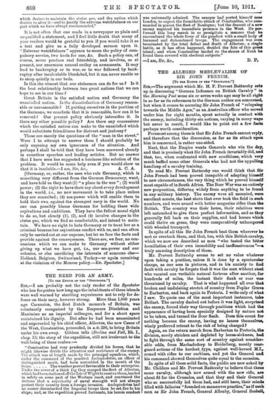 GERMANY AND THE STATUS QUO.

[To THE EDITOR Or THE " STECTATOE."1 SIR,—The following passage occurred in one of your leading articles on Saturday, May 20th :—

which desires to maintain the status quo, and the nation which desires to alter it—and to justify the extreme watchfulness on our part which we have always recommended."

It is not often that one reads in a newspaper so plain and unqualified a statement, and I feel little doubt that many of your readers would be grateful to you if you would take it as a text and give us a fully developed sermon upon it. " Extreme watchfulness" appears to mean the policy of com- pulsory service, two keels for one, &c. Such a policy can, of course, never produce real friendship, and involves, as at present, our enormous annual outlay on armaments. It may lead to bankruptcy or to war, or to war followed by bank- ruptcy after incalculable bloodshed, but it can never enable us to sleep quietly in our beds.

Is this the utmost that our statesmen can do for us ? Is it the best relationship between two great nations that we can hope to see in our time ?

These are merely the questions of the "man in the street." Were I to attempt to answer them I should probably be only exposing my own ignorance of the situation. And perhaps I shall be told that they have been answered already in countless speeches and leading articles. But no answer that I have seen has suggested a business-like solution of the problem. It would be some help even if you would show us

[Germany, or, rather, the men who rule Germany, which is something very different from the German Democracy, want, and have told us they want (1) "a place in the sun " ; (2) world power ; (3) the right to have their say about every development in the world, i.e., no new movement is to take place unless they are consulted ; (4) sea-power which will enable them to hold their own against the strongest navy in the world. No one can possibly blame Germans for holding these wide aspirations and ambitions. They have the fullest moral right to do so, but clearly (1), (2), and (4) involve changes in the status quo, -which we find so comfortable, and intend to main- tain. We have no right to hate Germany or to treat her as a criminal because her aspirations conflict with us, and can often only be carried out at our expense, but let us face the facts and provide against the consequences. There are, we fear, no con- cessions which we can make to Germany without either giving up what we have got, i.e., our sea-power and our colonies, or else sacrificing the interests of someone else— Holland, Belgium, Switzerland, Turkey—or again conniving at the violation of the Monroe policy.—En. Spectator.]