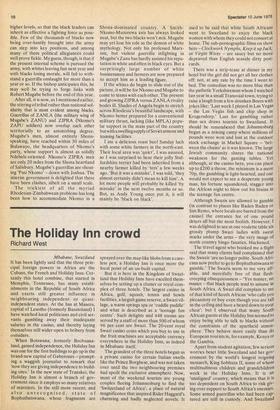 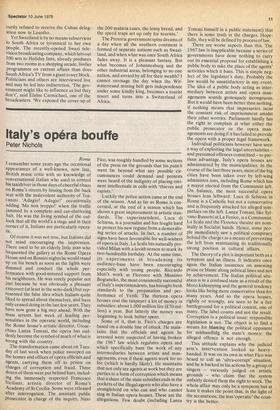 Mbabane, Swaziland It has been lightly said that the three principal foreign powers in Africa are the Cubans, the French and Holiday Inns. Certainly this hotel combine, that started in Memphis, Tennessee, has many establishments in the Republic of South Africa and exerts still greater influence in neighbouring independent or quasiindependent states. At the Inn at Maseru, capital of Lesotho (formerly Basutoland) I have watched local politicians and civil servants gambling away their inadequate salaries in the casino, and thereby laying themselves still wider open to bribery from outsiders.

When Botswana, formerly Bechuanaland, gained independence, the Holiday Inn was one for the first buildings to go up in the brand-new capital of Gaberones — prompting a waggish journalist to remark that 'now they are giving independence to building sites.' In the new state of Transkei, the Holiday Inn is almost a branch of government since it employs so many relatives of ministers. In the still more recent, and also unrecognised, state of Bophuthatswana, whose fragments are

sprayed over the map like blobs from a careless pen, a Holiday Inn is once more the focal point of an un-built capital.

But it is here in the Kingdom of Swaziland that Holiday Inns have excelled themselves.by setting up a cluster or royal complex of three hotels. The largest casino in Africa, golf, squash, tennis and bowls facilities, a largish game reserve, a Swazi village, a warm springs spa or 'cuddle puddle' and what is described as a 'teenage fun centre'. Such delights and 448 rooms are served by a staff of more than 500 of whom 96 per cent are Swazi. The 20-cent royal Swazi casino coins which you buy to use in the fruit machines are acceptable currency everywhere in the Holiday Inns, as indeed in Mbabane itself.

The grandest of the three hotels began as a private casino for certain Italian swells like the Prince Borghese, and was not taken over until the two neighbouring premises had spoilt the exclusive atmosphere. Now, most of the weekend tourists are young couples fleeing Johannesburg to find the 'Switzerland of Africa', a place of natural magnificence that inspired Rider Haggard's charming and badly neglected novels. It used to be said that white South Africans went to Swaziland to enjoy the black

women with whom they could not consort at home. The sub-pornographic films on show here —Clockwork Nymphs, Keep it up Jack, or Virgin Wives — are saucy but no more depraved than English seaside dirty postcards.

There was a strip-tease at dinner in my hotel but the girl did not get all her clothes off: not, at any rate by the time I went to bed. The comedian was no more blue than the pathetic Yorkshireman whom I watched last year in a small Transvaal town, trying to raise a laugh from a few drunken Boers with jokes like: 'Last week I played in Las Vegas — the Las VegUs fish and chip shop in Krugersdorp.' Lust for gambling rather than sex draws tourists to Swaziland, It should be remembered that Johannesburg began as a mining camp where millions of pounds were won and lost at the outdoor stock exchange in Market Square — 'bet ween the chains' as it was known. The large Jewish community shares the national weakness for the gaming tables. Yet although, at the casino here, you can place up to £200 a throw, the minimum is a mere 70p, the gambling is light-hearted, and one would not expect to see a desperate young man, his fortune squandered, stagger into the African night to blow out his brains in the teenage fun centre.

Although Swazis are allowed to gamble (in contrast to places like Baden Baden or San Remo, where locals are barred from the casino) the entrance fee of one pound deters all but the most foolish. However, I was delighted to see at one roulette table six grossly plump Swazi ladies with sweat marks under the arms — the very image of north country bingo fanatics, blackened.

the Swazis 'are no longer polite. South Africans now prefer to go to Bophuthatswana to gamble.' The Swazis seem to me very affable, and mercifully free of that fleshcreeping obsequiousness — 'Yes master, no master — that black people tend to assume in

South Africa. A Swazi did complain to me of that kind of South African 'who calls you piccaninny or boy even though you are tall as the ceiling,and have a beard down to your chest': but I observed that many South

phere. They behave more easily than do European tourists in, for example, Kenya or the Gambia.

monarch, King Sobhuza II, some of whose multitudinous children and grandchildren

work in the Holiday Inns. It is an 'unaligned' country, which means that it Is too dependent on South Africa to risk giv

ing over support to South Africa's enemies. Some armed guerrillas who had been captured are still in custody. And Swaziland

curtly refused to receive the Cuban delegation now in Lesotho.

Yet Swaziland is by no means subservient to South Africa or tyrannical to her own People. The recently-opened Swazi television broadcasting company, which lets out 500 sets to Holiday Inns, already produces from two rooms in a shopping arcade, livelier programmes on current affairs than does South Africa's TV from a giant tower block. Politicians and others are interviewed live and may be led into indiscretion. 'The government might like to influence us but they don't', said Elaine Carmichael, one of the broadcasters. 'We exposed the cover-up of the 200 malaria cases, the lousy bread, and the speed traps set up only for tourists.'

The Pretoria government spins dreams of a day when all the southern continent is formed of separate nations such as Swaziland, and when what was once South Africa fades away. It is a pleasant fantasy. But what becomes of Johannesburg and the other industrial areas, belonging to no one nation, and envied by all for their wealth? I cannot envisage the day when the Witwatersrand mining belt gets independence under some kindly king, becomes a tourist resort and turns into a Switzerland of Africa.