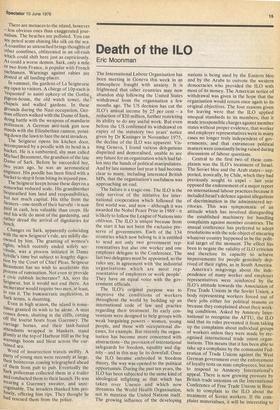 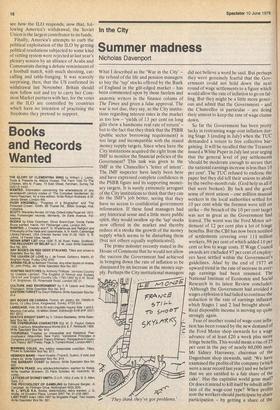 Death of the ILO

The International Labour Organisation has been meeting in Geneva this week in an atmosphere fraught with anxiety. It is frightened that other countries may now abandon ship following the United States withdrawal from the organisation a few months ago. The US decision has cut the ILO's annual income by 25 per cent — a reduction of $20 million, further restricting its ability to do any useful work. But even before the US confirmed its withdrawal on expiry of the statutory two years' notice given by Dr Kissinger in November 1975, the decline of the ILO was apparent. Visiting Geneva, I found various delegations dispirited and demoralised, unable to see any future for an organisation which had fallen into the hands of political manipulators. And by late summer last year it had become clear to many, including interested British MPs, that the organisation's usefulness was approaching an end.

The failure is a tragic one. The ILO is the only survivor of the initiative for international cooperation which, followed the first world war, and now — although it was awarded the Nobel Peace Prize in 1969 — it is likely to follow the League of Nations into oblivion. The ILO is unique because from the start it has not been the exclusive preserve of governments. Each of the 134 countries which now belong to it is entitled to send not only two government representatives but also one worker and one employer delegate to the Conference. The

last two delegates must be appointed, so the rules say, in agreement with 'the industrial organisations which are most representative of employers or work people'. They have an equal voice with the government officials.

The ILO's original purpose was to improve the conditions of workers throughout the world by building up an international code of law and practice regarding their treatment. Its early con ventions were designed to help groups with weak bargaining powers — women, young people, and those with occupational dis eases, for example. But recently the organ isation has become more concerned with abstractions — the provision of international safeguards for freedom, equality and dig nity — and in this may lie its downfall. Once the ILO became embroiled in freedom theory, the way was opened to the political opportunists. During the past ten years, the ILO has been subjected to the same kind of ideological infighting as that which has taken over Unesco and which now threatens the World Health Organisation, not to mention the United Nations itself. The growing influence of the developing nations is being used by the Eastern bloc and by the Arabs to outvote the western democracies who provided the ILO with most of its money. The American notice of withdrawal was given in the hope that the organisation would return once again to its original objectives. The four reasons given for leaving were that the ILO applied unequal standards to its members, that it made irresponsible charges against member states without proper evidence, that worker and employer representatives were in many cases no longer truly independent of governments, and that extraneous political matters were constantly being raised during discussions of labour questions.

Central to the first two of these complaints was the ILO's treatment of Israel. The Soviet bloc and the Arab states — supported, ironically, by Chile, which they had previously sought to expel — last year opposed the endorsement of a major report on international labour practices because it included Israel's defence against allegations of discrimination in the administered territories. This was symptomatic of an attitude which has involved disregarding the established machinery for handling complaints against member countries. The annual conference has preferred to adopt resolutioins with the sole object of smearing whatever country happened to be the political target of the moment. The effect has been to negate the validity of ILO criticism and therefore its capacity to achieve improvements for people genuinely deprived of their rights, as in South America.

America's misgivings about the independence of many worker and employer representatives were reinforced by the ILO's attitude towards the Association of Free Trade Unions in the Soviet Union, a body representing workers forced out of their jobs either for political reasons or because they complained about their work ing conditions. Asked by Amnesty Inter national to recognise the AFTU, the ILO said that its rules prevented it from taking up the complaints about individual groups of workers unless they were made by recognised international trade union organ isations. This means that it has been able to take up a complaint by the communist Federation of Trade Unions against the West German government over the enforcement of loyalty tests on state employeees, but not to respond to Amnesty International's appeal. There is now growing pressure by British trade unionists on the International Conference of Free Trade Unions in Brus sels to complain to the ILO about the treatment of Soviet workers. If the complaint materialises, it will be interesting to see how the ILO responds, now that, following America's withdrawal, the Soviet Union is the largest contributor to its funds.

Finally, America's attempts to curb the political exploitation of the ILO by getting political resolutions subjected to some kind of vetting system were rejected at last year's plenary session by an alliance of Arabs and Communists during a debate reminiscent of a football match, with much shouting, catcalling and table-banging. It was scarcely surprising, then; that the US confirmed its withdrawal last November. Britain should now follow suit and try to carry her Common Market partners with her, for the votes at the ILO are controlled by countries which have no intention of practising the freedoms they pretend to support.