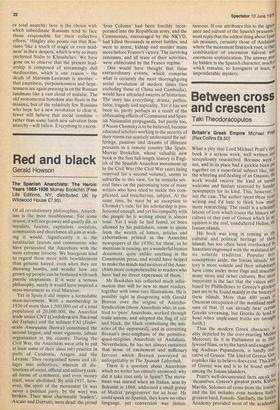 Of all revolutionary philosophies, Anarchism is the most troublesome. For some reason, it will not go away and quietly die, as royalists, fascists, capitalists, socialists, communists and churchmen all join in wishing it would. Significantly it is the totalitarian fascists and communists who have persecuted the Anarchists with the most extreme ferocity. We bourgeois tend to regard them more with bewilderment than genuine hatred, even when they are throwing bombs, and wonder how any grown-up people can be bothered with such puerile utopianism. If it were a serious philosophy, surely it would have inspired a mass-movement to rival Marxism.

Yet in Spain it did inspire a formidable mass-movement. With a membership in 1936 of more than 1,500,000 out of a total population of 20,000,000, the Anarchist trade union CNT (Confederacion Nacional del Trabajo) and the militant FAT (FederaciOn Anarquista Iberica) constituted the second largest, and most vigorous, labour organisation in the country. During the Civil War, the Anarchists were able to put at least some of their ideas into practice in parts of Catalonia, Aragon and the Levante. They reorganised towns and villages into collectives, wherein all distinctions of social, official and military rank, all forms of commerce, and even money itself, were abolished. By mid-1937, however, the spirit of the movement (it was never a political party, by the way) was broken. Their most charismatic `leaders', Ascaso and Durrutti, were dead: the proud

`Iron Column' had been forcibly incorporated into the Republican army, and the Communists, encouraged by the NKVD, had killed thousands in street battles, and were to arrest, kidnap and murder many more before Franco's victory. The surviving remnants, and all trace of their activities, were obliterated by the Franco regime.

One would have thought that these extraordinary events, which comprise what is certainly the most thoroughgoing social revolution of modern times (not excluding those of China and Cambodia), would have attracted swarms of historians. The story has everything: drama, pathos, farce, tragedy and topicality. Yet it has not been so, partly perhaps as a result of the obfuscating effects of Communist and Spanish Nationalist propaganda, but partly too, if Naom Chomsky is to be believed, because educated scholars working in the security of their rooms can scarcely understand the sufferings, passions and dreams of illiterate peasants in a remote country like Spain. Murray Bookchin, whose valuable new book is the first full-length history in English of the Spanish Anarchist movement up to the Civil War (the Civil War years being reserved for a second volume), seems to subscribe to this view, for he remarks several times on the patronising tone of many writers who have tried to tackle this complicated, and treacherous, subject. At the same time, he must be an exception to Chomsky's rule, for his scholarship is professional enough, and yet his sympathy with the people he is writing about is almost total. Yet I wish he had found, or been allowed by his publishers, room to quote from the wealth of letters, articles and exhortations printed in the Anarchist newspapers of the 1930s; for these, as he mentions in passing, are a wonderful human document, quite unlike anything in the Communist press, and would have helped to make the minds and motives of the Anarchists more comprehensible to readers who have had no direct experience of them.

Mr Bookchin has collected much information that will be new to most readers, together with some rare illustrations. He is possibly right in disagreeing with Gerald Brenan over the origins of AnarchoSyndicalism (those Anarchists who, in contrast to `pure' Anarchists, worked through trade unions, and adopted the flag of red ' and black, the black symbolising the miseries of the oppressed), and in correcting Brenan's over-emphasis of the primitive, quasi-religious Anarchists of Andalusia. Nevertheless, he has not always sustained that sense of excitement and millenary fervour which Brenan conveyed so unforgettably in The Spanish Labyrinth.

There is a question about Anarchism which no writer has entirely answered: why did it take root only in Spain? The movement was started when an Italian, sent by Bakunin in 1868, addressed a small group of Madrid `progressives' for an hour. He could speak no Spanish, they knew no other language, yet conversion was instan

taneous. If one attributes this to the ignae; ance and naiveté of the Spanish peasants,' must reply that the oddest thing about Span' ish peasants, certainly those of Andalusl! where the movement first took root, is the combination of enormous naiveté wntl enormous sophistication. The answer Mil lie hidden in the Spanish character, much° which remains, to foreigners at least, imponderable mystery.