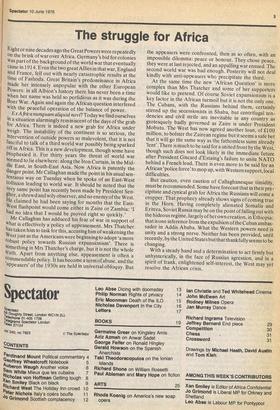 The struggle for Africa

Eight or nine decades ago the Great Powers were repeatedly on the brink of war over Africa. Germany's bid for colonies was part of the background of the world war that eventually came in 1914. Even the two great Allies in that war, England and France, fell out with nearly catastrophic results at the time of Fashoda. Great Britain's predominance in Africa made her intensely unpopular with the other European Powers: in all Albion's history there has never been a time When her name was held so perfidious as it was during the hoer War. Again and again the African question interfered With the peaceful operation of the balance of power.

Ex Africa nunquam aliquid novi? Today we find ourselves In a situation alarmingly reminiscent of the days of the grab for Africa. There is indeed a new grab for Africa under Weigh. The instability of the continent is so serious, the Intervention of outside powers so malevolent, that it is not fanciful to talk of a third world war possibly being sparked off in Africa. This is a new development, though some have Prophesied it. For thirty years the threat of world war seemed to lie elsewhere: along the Iron Curtain, in the Middle East, in South-East Asia. Now Africa is patently the danger point. Mr Callaghan made the point in his usual sententious way on Tuesday when he spoke of an East-West collision leading to world war. It should be noted that the very same point has recently been made by President Senghor, a shrewd and wily observer, and no enemy of the West. He claimed he had been saying for months that the EastWest flashpoint would come either in Zaire or Zambia: 'I had no idea that I would be proved right so quickly.'

Mr Callaghan has adduced his fear of war in support of What is effectively a policy of appeasement. Mrs Thatcher has taken him to task for this, accusing him of weakening the West just as the Americans were beginning to adopt 'a more robust policy towards Russian expansionism'. There is something in Mrs Thatcher's charge, but it is not the whole truth. Apart from anything else, appeasement is often a Commendable policy. It has become a term of abuse, and the appeasers' of the 1930s are held in universal obloquy. But the appeasers were confronted, then as so often, with an impossible dilemma: peace or honour. They chose peace, they were at last rejected, and an appalling war ensued. The second world war was bad enough. Posterity will not deal kindly with anti-appeasers who precipitate the third.

At the same time the new 'African Question' is more complex than Mrs Thatcher and some of her supporters would like to pretend. Of course Soviet expansionism is a key factor in the African turmoil but it is not the only one. The Cubans, with the Russians behind them, certainly stirred up the secessionists in Shaba, but centrifugal tendencies and civil strife are inevitable in any country as grotesquely badly governed as Zaire is under President Mobutu. The West has now agreed another loan, of 00 million, to bolster the Zairean regime but it seems a safe bet that it will go the same way as the fathomless sums already 'lent'. There is much to be said for a united front by the West, though such does not look likely in the immediate future after President Giscard d'Estaing's failure to unite NATO behind a French lead. There is even more to be said for an African 'police force' to mop up, with Western support, local difficulties.

But caution, even caution of Callaghanesque timidity, must be recommended. Some have forecast that in their precipitate and cynical grab for Africa the Russians will come a cropper. That prophecy already shows signs of coming true in the Horn. Having completely alienated Somalia and Eritrea, Soviet Russia may be on the point of falling out with the hideous regime, largely of her own creation, in Ethiopia: that is one inference from the expulsion of the Cuban ambassador in Addis Ababa. What the Western powers need is unity and a strong nerve. Neither has been provided, until recently, by the United States but that thankfully seems to be changing.

With a steady hand and a determination to act firmly but unhysterically, in the face of Russian egression, and in a spirit of frank, enlightened self-interest, the West may yet resolve the African crisis.