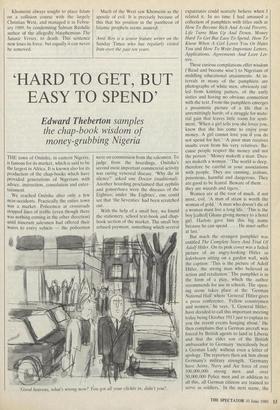 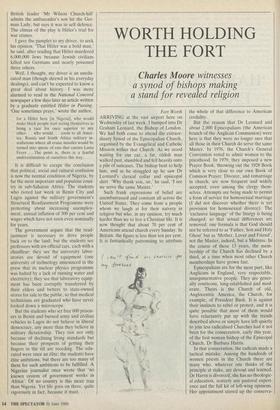 `HARD TO GET, BUT EASY TO SPEND'

the chap-book wisdom of money-grubbing Nigeria

THE town of Onitsha, in eastern Nigeria, is famous for its market, which is said to be the largest in Africa. It is known also for its production of the chap-books which have provided generations of Nigerians with advice, instruction, consolation and enter- tainment.

We reached Onitsha after only a few near-accidents. Practically the entire town was a market. Policemen at crossroads stopped lines of traffic (even though there was nothing coming in the other direction) until itinerant salesmen had offered their wares to every vehicle — the policemen

were on commission from the salesmen. To judge from the hoardings, Onitsha's second most important commercial activity was curing venereal disease. 'Why die in silence?' asked one Doctor (traditional). Another hoarding proclaimed that syphilis and gonorrhoea were the diseases of the Eighties; under 'the Eighties', one could see that 'the Seventies' had been scratched out.

With the help of a small boy, we found the stationery, school text-book and chap- hook section of the market. The small boy refused payment, something which several 'Good heavens, what's wrong now? You got all your cliches in, didn't you?. expatriates could scarcely believe when I related it. In no time I had amassed a collection of pamphlets with titles such as How To Become Rich And Avoid Poverty, Life Turns Man Up And Down, Money Hard To Get But Easy To Spend, How To Know When A Girl Loves You Or Hates You. and How To Write Important Letters, Applications, Agreements And Love Let- ters.

These curious compilations offer wisdom ('Read and become wise') to Nigerians of middling educational attainments. At in- tervals in many of the pamphlets are photographs of white men, obviously cul- led from knitting patters, of the early sixties and having no obvious connection with the text. From the pamphlets emerges a pessimistic picture of a life that is unremittingly harsh; of a struggle for mate- rial gain that leaves little room for senti- ment. 'When a girl tells you she loves you, know that she has come to enjoy your money. A girl cannot love you if you do not spend for her.' A poor man receives insults even from his very relatives. Be- cause people respect the money and not the person.' Money maketh a man. Dres- ses maketh a woman.' The world is deep, therefore be careful in your associations with people. They are cunning, jealous, poisonous, harmful and dangerous. They are good to he feared. Beware of them.. . they are wizards and tigers.'

Women are at the root of much, if not most, evil. 'A man of straw is worth the woman of gold.' A man who doesn't die of a woman must live a long life.' This is the boy [called] Ghana giving money to a hotel girl. Harlots gave him this big name because he can spend. . . . He must suffer at last.'

But much the strangest pamphlet was entitled The Complete Story And Trial Of Adolf Hitler. On its pink cover was a faded picture of an angry-looking Hitler in lederhosen sitting on a garden wall, with the caption: 'This is the picture of Adolf Hitler. the strong man who believed in action and retaliation.' The pamphlet is in the form of a play, which the author recommends for use in schools. The open- ing scene takes place at the 'German National Hall' where 'General' Hitler gives a press conference. 'Fellow countrymen and women,' he says, 'I, General Hitler, have decided to call this important meeting today being October 1913 just to explain to you the recent events hanging about.' He then complains that a German aircraft was forced by British agents to land in Liberia and that the elder son of the British ambassador to Germany 'mercilessly beat a German Lady' without even a letter of apology. The reporters then ask him about Germany's military strength. 'Germany have Army, Navy and Air force of over 100,000,000 strong men and over 50,000,00() Police men and in addition to all this, all German citizens are trained to serve as soldiers.' In the next scene, the British leader 'Mr Wilson Church-hill' admits the ambassador's son hit the Ger- man Lady, but says it was in self defence. The climax of the play is Hitler's trial for war crimes.

I gave the pamplet to my driver, to seek his opinion. 'That Hitler was a bold man,' he said, after reading that Hitler murdered 6,000,000 Jews because Jewish civilians killed ten Germans and nearly poisoned three others.

Well, I thought, my driver is an unedu- cated man (though shrewd in his everyday dealings), and can't be expected to know a great deal about history. I was more alarmed to read in the National Concord newspaper a few days later an article written by a graduate entitled Hitler in Passing. 'One sometimes prays,' wrote the author,

for a Hitler here [in Nigeria], who would make black people start seeing themselves as being a race for once superior to any other. . . who would. . . zoom to all Amer- ica, Russia and South Africa military in- stallations where all cruise missiles would be turned into specie of rats that carries Lassa Fever. . . The point is, there is a fearful underestimation of ourselves this way.

It is difficult to escape the conclusion that political, social and cultural confusion is now the normal condition of Nigeria, by far the most important and populous coun- try in sub-Saharan Africa. The students who rioted last week in Benin City and Lagos against the military government's Structural Readjustment Programme were protesting about increasing unemploy- ment, annual inflation of 300 per cent and wages which have not risen even nominally for years.

The government argues that the read- justment is necessary to drive people back on to the land, but the students see professors with ten official cars, each with a chauffeur: they see the university labor- atories are devoid of equipment (one university of technology announced in the press that its nuclear physics programme was halted by a lack of running water and electricity); they see that laboratory equip- ment has been corruptly transferred by their elders and betters to state-owned stores for sale to the public, so that medical technicians are graduated who have never looked down a microscope.

But the students who set free 600 prison- ers in Benin and burned army and civilian vehicles in Lagos do not believe in liberal democracy, any more than they believe in military dictatorship. They riot not only because of declining living standards but because their prospects of getting their fingers in the till are receding. The edu- cated were once an elite; the students have elite ambitions, but there are too many of them for such ambitions to be fulfilled. A Nigerian journalist once wrote that 'no known system of government works in Africa'. Of no country is this more true than Nigeria. Yet life goes on there, quite vigorously in fact, because it must