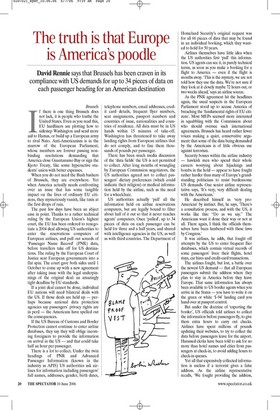 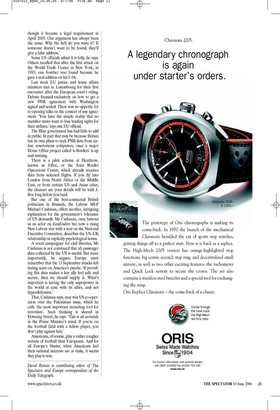 The truth is that Europe is America’s poodle

If there is one thing Brussels does not lack, it is people who loathe the United States. Even as you read this, EU hardliners are plotting how to sidestep Washington and send more aid to Hamas, or build up a European army to rival Nato. Anti-Americanism is in the marrow of the European Parliament, whose members are forever passing nonbinding resolutions demanding that America close Guantanamo Bay or sign the Kyoto Treaty, like some hyperactive students’ union with better expenses.

When you do not need the Bush bashers of Brussels, they are everywhere. Yet when America actually needs confronting over an issue that has some tangible impact on the lives of ordinary EU citizens, they mysteriously vanish, like taxis at the first drops of rain.

The past few days have been an abject case in point. Thanks to a rather technical ruling by the European Union’s highest court, the EU has been ordered to renegotiate a 2004 deal allowing US authorities to enter the reservations computers of European airlines, and pull out screeds of ‘Passenger Name Record’ (PNR) data, before travellers take off for US destinations. The ruling by the European Court of Justice sent European governments into a flat spin. The court gave both sides until 1 October to come up with a new agreement after taking issue with the legal underpinnings of the original deal: an amazingly tight deadline by EU standards.

If a joint deal cannot be done, individual EU nations will need bilateral deals with the US. If those deals are held up — perhaps because national data protection agencies say passengers’ privacy rights are in peril — the Americans have spelled out the consequences.

If the US Bureau of Customs and Border Protection cannot continue to enter airline databases, they say they will oblige incoming foreigners to provide the information on arrival in the US — and that could take half an hour per passenger.

There is a lot to collect. Under the twin headings of PNR and Advanced Passenger Information (known in the industry as APIS) US authorities ask airlines for information including passengers’ full names, addresses, gender, birth dates, telephone numbers, email addresses, credit card details, frequent flyer numbers, seat assignments, passport numbers and countries of issue, nationalities and countries of residence. All data must be in US hands within 15 minutes of take-off. Washington has threatened to take away landing rights from European airlines that do not comply, and to fine them thousands of pounds per passenger.

There has been much media discussion of the ‘data fields’ the US is not permitted to collect. After long months of wrangling by European Commission negotiators, the US authorities agreed not to collect passengers’ dietary preferences (which could indicate their religion) or medical information held by the airline, such as the need for a wheelchair.

US authorities actually ‘pull’ all the information held on airline reservations computers, but are legally bound to filter about half of it out so that it never reaches agents’ computers. Once ‘pulled’, up to 34 pieces of data on each passenger can be held for three and a half years, and shared with intelligence agencies in the US, as well as with third countries. The Department of Homeland Security’s original request was for all 66 pieces of data that may be found in an individual booking, which they wanted to hold for 50 years.

Airlines themselves have little idea when the US authorities first ‘pull’ this information. US agents can see it, in purely technical terms, as soon as you make a booking for a flight to America — even if the flight is months away. ‘This is the mystery, we are not told how they use the data. We’re not sure if they look at it closely maybe 72 hours out, or two weeks ahead,’ says an airline source.

As the PNR agreement hit the headlines again, the usual suspects in the European Parliament stood up to accuse America of breaching the ‘fundamental rights of EU citizens’. Most MEPs seemed more interested in squabbling with the Commission about who should oversee such international agreements. Brussels has heard rather fewer voices making a quiet, conservative argument: that some of the data being demanded by the Americans is of little obvious use against terrorism.

Security bosses within the airline industry — hawkish men who spend their whole careers worrying about hijackings and bombs in the hold — appear to have fought rather harder than many of Europe’s grandstanding politicians to resist burdensome US demands. One senior airline representative says, ‘It’s very, very difficult dealing with the Americans.’ He described himself as ‘very proAmerican’ by instinct. But, he says, ‘There’s a consultation process, and with the US, it works like this: “Do as we say.” The Americans want it done their way or not at all. There again, I think the officials themselves have been lumbered with these laws by Congress.’ It was airlines, he adds, that fought off attempts by the US to enter frequent flier databases, which contain virtual records of some passengers’ lives: their flights, hotel stays, car hires and credit-card transactions.

The airlines fought, but lost, a battle over the newest US demand — that all European passengers submit the address where they plan to stay in America before they leave Europe. That same information has always been available to US border agents when you arrive in the States — you have to write it on the green or white ‘I–94’ landing card you hand over at passport control.

But under the doctrine of ‘exporting the border’, US officials told airlines to collect the information before passengers fly, to give them extra hours to carry out checks. Airlines have spent millions of pounds updating their websites, to try to collect the data before passengers leave for the airport. Harassed clerks have been told to ask for no more than hotel names and cities from passengers at check-in, to avoid adding hours to check-in queues.

Yet all that expensively collected information is useless if a terrorist gives a false address. As the airline representative recalls, ‘We fought providing the address, though it became a legal requirement in April 2005. Our argument has always been the same. Why the hell do you want it? If someone doesn’t want to be found, they’ll give a false address.’ Some US officials admit it is folly, he says. Others recalled that after the first attack on the World Trade Center in New York, in 1993, one bomber was found because he gave a real address on his I–94.

Last week EU justice and home affairs ministers met in Luxembourg for their first encounter after the European court’s ruling. Debate focused exclusively on how to get a new PNR agreement with Washington signed and sealed. There was no appetite for re-opening talks on the content of any agreement. ‘You have the simple reality that no member states want to lose landing rights for their airlines,’ says one EU official.

The Blair government has had little to add in public. In part that may be because Britain has its own plans to seek PNR data from airline reservations computers, once a major Home Office project called ‘e-Borders’ is up and running.

There is a pilot scheme at Heathrow, known as J-Boc, or the Joint Border Operations Centre, which already receives data from selected flights. If you fly into London from North Africa or the Middle East, or from certain US and Asian cities, the chances are your details will be with JBoc long before you land.

But one of the best-connected British politicians in Brussels, the Labour MEP Michael Cashman, offers another, intriguing explanation for the government’s tolerance of US demands. Mr Cashman, once famous as an actor on EastEnders but now a rising New Labour star with a seat on the National Executive Committee, describes the US–UK relationship in explicitly psychological terms.

A vocal campaigner for civil liberties, Mr Cashman is not convinced that all passenger data collected by the US is useful. But more importantly, he argues, Europe must remember that the 11 September attacks left lasting scars on America’s psyche. ‘If providing this data makes a key ally feel safe and secure, then we should supply it. What’s important is having the only superpower in the world at ease with its allies, and not hyperdefensive.’ That, Cashman says, may win US co-operation over the Palestinian issue, which he calls ‘the most important recruiting tool for terrorism’. Such thinking is shared in Downing Street, he says. ‘This is all certainly in the Prime Minister’s mind. If you’re on the football field with a fellow player, you don’t play against him.’ Americans, of course, play a rather rougher version of football than Europeans. And for all Europe’s bluster, when Americans feel their national interests are at stake, it seems they play to win.

David Rennie is contributing editor of The Spectator and Europe correspondent of the Daily Telegraph.