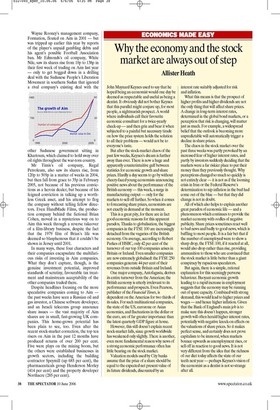 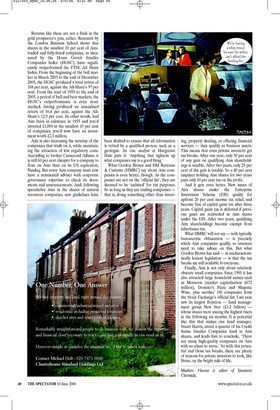 John Maynard Keynes used to say that he hoped being an economist would one day be deemed as respectable and useful as being a dentist. It obviously did not bother Keynes that this parallel might conjure up, for most people, a nightmarish prospect. A world where individuals call their favourite economic consultant for a twice-yearly check-up — and then grin and bear it when subjected to a painful but necessary tirade on how the price system holds the solution to all their problems — would not be to everyone’s taste.

But after the stock-market chaos of the past few weeks, Keynes’s dream is further away than ever. There is now a huge and apparently counterintuitive gulf between statistics for economic growth and share prices. Hardly a day seems to go by without cheery-faced young economists announcing positive news about the performance of the British economy — this week, a surge in manufacturing output — only for the markets to sell off further. So when it comes to forecasting share prices, economists are not exactly in demand at the moment.

This is a great pity, for there are in fact good economic reasons for this apparent paradox. Thanks to globalisation, the biggest companies in the FTSE 100 are increasingly detached from the vagaries of the British economy. On average, according to Robert Parkes of HSBC, only 42 per cent of the turnover of our top 100 companies arises in Britain or Ireland. Even smaller companies are now extremely globalised: the FTSE 250 companies generate 44 per cent of their revenues from outside Britain and Ireland.

One major company, Antofagasta, derives its entire turnover from the Americas; the British economy is utterly irrelevant to its performance and prospects. Even Pearson, publisher of the Financial Times, is dependent on the Americas for two thirds of its sales. For such multinational companies, the state of the US, eurozone or Asian economies, and fluctuations in the dollar or the euro, are of far greater importance than the latest quarterly GDP figure at home.

However, this still doesn’t explain recent stock-market falls, since growth worldwide has weakened only slightly. There is another, even more fundamental reason why news of a strong economic performance often has little bearing on the stock market.

Valuation models used by City banks assume that the price of a share should be equal to the expected net present value of its future dividends, discounted by an interest rate suitably adjusted for risk and inflation.

What this means is that the prospect of higher profits and higher dividends are not the only thing that will affect share prices. A change in long-term interest rates, determined in the global bond markets, or a perception that risk is changing, will matter just as much. For example, a widespread belief that the outlook is becoming more unpredictable will automatically trigger a decline in share prices.

The chaos in the stock market over the past three weeks was partly provoked by an increased fear of higher interest rates, and partly by investors suddenly deciding that the markets were a far riskier place to put their money than they previously thought. Why perceptions changed so much so quickly is not entirely clear — it is not as if the looming crisis in Iran or the Federal Reserve’s determination to nip inflation in the bud had come out of the blue — but that they did change is not in doubt.

All of which also helps to explain another great paradox of economic life — and a phenomenon which continues to provide the market economy with oodles of negative publicity. Share prices sometimes react well to bad news and badly to good news, which is baffling to most people. It is a fair bet that if the number of unemployed were to show a sharp drop, the FTSE 100, if it reacted at all, would also drop rather than rise, providing ammunition to those who are convinced that the stock market is little better than a giant conspiracy by rapacious speculators.

But again, there is a simple, rational explanation for this seemingly perverse behaviour. Buoyant economic growth leading to a rapid increase in employment suggests that the economy may be running out of spare capacity. Combined with strong demand, this would lead to higher prices and wages — and hence higher inflation. Given that the Bank of England’s main job is to make sure this doesn’t happen, stronger growth will often herald higher interest rates, potentially with negative knock-on effects on the valuations of share prices. So it makes perfect sense, and certainly does not prove capitalism to be immoral, when markets bounce upwards as unemployment rises, or sell off in reaction to good news. It is not very different from the idea that the richness of our diet today affects the state of our teeth next year — perhaps Keynes’s vision of the economist as a dentist is not so strange after all. Returns like these are not a flash in the gold prospector’s pan, either. Research by the London Business School shows that shares in the smallest 10 per cent of Aimtraded and fully-listed companies, as measured by the Hoare Govett Smaller Companies Index (HGSC), have significantly outperformed the FTSE All Share Index. From the beginning of the bull market in March 2003 to the end of December 2005, the HGSC produced a total return of 168 per cent, against the All-Share’s 97 per cent. From the start of 1955 to the end of 2005, a period of bull and bear markets, the HGSC’s outperformance is even more marked, having produced an annualised return of 16.4 per cent, against the AllShare’s 12.9 per cent. In other words, had Aim been in existence in 1955 and you’d invested £1,000 in the smallest 10 per cent of companies, you’d now have an investment worth £2.3 million.

Aim is also increasing the scrutiny of the companies that trade on it, while maintaining the attraction of low regulatory costs. According to broker Canaccord Adams, it is still 60 per cent cheaper for a company to float on Aim than on its US equivalent, Nasdaq. But every Aim company must now have a nominated adviser with corporate governance expertise to check its documents and announcements. And, following speculative rises in the shares of natural resources companies, new guidelines have been drafted to ensure that all information is vetted by a qualified person, such as a geologist. As one analyst at Hargreave Hale puts it: ‘Anything that tightens up what companies say is a good thing.’ What Gordon Brown and HM Revenue & Customs (HMRC) say about Aim companies is even better, though. As the companies are not on the ‘official list’, they are deemed to be ‘unlisted’ for tax purposes. So as long as they are trading companies that is, doing something other than invest ing, property dealing, or offering financial services — they qualify as business assets. This means that even private investors get tax breaks. After one year, only 50 per cent of any gain on qualifying Aim shareholdings is taxable. After two years, only 25 per cent of the gain is taxable. So a 40 per cent taxpayer holding Aim shares for two years pays only 10 per cent tax on the profit.

What HMRC will not say — with typically bureaucratic obfuscation — is precisely which Aim companies qualify, so investors need to take advice on this. But what Gordon Brown has said — in uncharacteristically lenient legislation — is that the tax breaks are still available to everyone.

Finally, Aim is not only about relatively obscure small companies. Since 1995 it has also attracted large household names such as Monsoon (market capitalisation £672 million), Domino’s Pizza and Majestic Wine, plus another 190 companies from the Stock Exchange’s official list. Last year saw its largest flotation — fund management group New Star (£1.2 billion) whose shares were among the highest risers in the following six months. It is potential like this that makes one fund manager, Stuart Harris, invest a quarter of his Credit Suisse Smaller Companies fund in Aim shares, and leads him to conclude, ‘There are many high-quality companies on Aim with no plans to move.’ So with this potential and those tax breaks, there are plenty of reasons for private investors to look, like Brian, on the bright side of life.