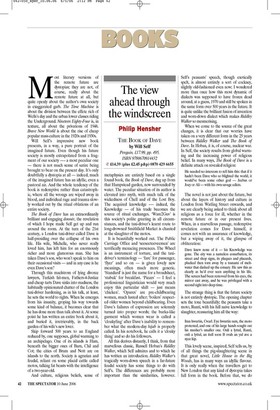 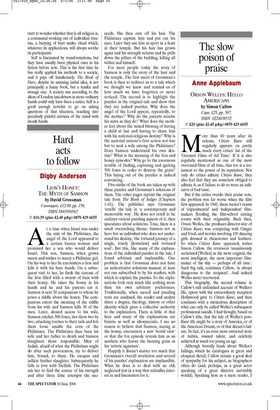 The view ahead through the windscreen

THE BOOK OF DAVE by Will Self Penguin, £17.99, pp. 495, ISBN 9780670914432 ✆ £14.39 (plus £2.45 p&p) 0870 429 6655 Most literary versions of the remote future are dystopias; they are not, of course, really about the remote future at all, but quite openly about the author’s own society in exaggerated garb. The Time Machine is about the division between the effete rich of Wells’s day and the urban lower classes riding the Underground. Nineteen Eighty-Four is, in texture, all about the privations of 1948. Brave New World is about the rise of cheap popular mass culture in the 1920s and 1930s.

Will Self’s impressive new book presents, in a way, a pure portrait of the imagined future. Even though his future society is mostly extrapolated from a fragment of our society —a most peculiar one — there is not much sense of satire being brought to bear on the present day. It’s only doubtfully a dystopia at all — indeed, much of the imagined future has an idyllic, even a pastoral air. And the whole tendency of the book is redemptive rather than catastrophic, where all the wrongs are wiped away in blood, and individual rage and trauma slowly worked out by the ritual oblations of an entire society.

The Book of Dave has an extraordinarily brilliant and engaging donnée, the revelation of which I hope made Self get up and run around the room. At the turn of the 21st century, a London taxi-driver called Dave is half-presiding over the collapse of his own life. His wife, Michelle, who never really loved him, has left him for an enormously richer and more glamorous man. She has taken Dave’s son, who won’t speak to him on their occasional visits — and in any case is he even Dave’s son?

Through this maelstrom of lying divorce lawyers, Turkish hit-men, Fathers-4-Justice and cheap tarts Dave sinks into madness, the habitually opinionated chatter of the London taxi-driver hardening, as in his talk, at least, he sets the world to rights. When he emerges from his insanity, groping his way towards some kind of balance, it becomes clear that he has done more than talk about it. At some point he has written an entire book about it, and buried it, irretrievably, in the back garden of his wife’s new lover.

Skip forward 500 years to an England reduced by, one supposes, global warming to an archipelago. One of its islands is Ham, beneath the bigger ones of Barn, Chil and Cot; the cities of Brum and Nott are on islands to the north. Society is agrarian and feudal, reliant on some placid cattle called motos, talking fat beasts with the intelligence of a two-year-old.

And culture, religious beliefs, sense of metaphysics are entirely based on a single found book, the Book of Dave, dug up from that Hampstead garden, now surrounded by water. The peculiar situation of its author is elevated into myth, with much talk of the wickedness of Chell and of the Lost Boy. The acquired knowledge -— indeed, the Knowledge — of his trade becomes the source of ritual exchanges. ‘Ware2Guv’ is this society’s polite greeting in all circumstances, and the taxi-driver’s learnt route to long-drowned Smithfield Market is chanted at the slaughter of the motos.

It is beautifully worked out. The Public Carriage Office and ‘seeseeteeveemen’ are terrifically menacing presences. The Wheel is an instrument of torture, and the taxidriver’s terminology — ‘fare’ for passenger, ‘flyer’ and so on — is given lovely new meanings, often much more generic. ‘Standard’ is just the name for a broadsheet, ‘stabuk’ for breakfast. ‘Pieces’ — I feel a professional linguistician would very much enjoy this particular shift — just means ‘chicken’. ‘Opares’ are pre-childbearing women, much lusted after; ‘boilers’ respected older women beyond childbearing. Even Dave’s failures of expression are solemnly turned into proper words; the burka-like garment which women wear is called a ‘cloakyfing’ after Dave’s inability to remember what the modern-day hijab is properly called. In his notebook, he calls it a ‘cloaky thing’ and so do his followers.

All this derives distantly, I think, from that marvellous classic, Russell Hoban’s Riddley Walker, which Self admires and to which he has written an introduction. Riddley Walker’s tragically worn-down speech in a far-future feudal society has some things to do with Self’s. The differences are probably more important than the similarities, however. Self’s peasants’ speech, though exotically spelt, is almost entirely a sort of cockney, slightly old-fashioned even now; I wondered more than once how this most dynamic of dialects was supposed to have frozen dead around, at a guess, 1970 and still be spoken in the same form over 500 years in the future. It is quite unlike the brilliant fusion of invention and worn-down dialect which makes Riddley Walker so mesmerising.

When we come to the source of the great changes, it is clear that our worries have taken on a very different form in the 25 years between Riddley Walker and The Book of Dave. In Hoban, it is, of course, nuclear war. In Self, the society results from global warming and the increasing power of religious belief. In many ways, The Book of Dave is a definite attack on revealed religion:

He needed no intercom to tell him this: that if it hadn’t been Dave who so blighted the world, it would’ve been some other god — Jeebus or Joey or Ali — with his own savage edicts.

The novel is not just about the future, but about the layers of history and culture in London from Watling Street onwards, and we are clearly being asked to think about all religions as a force for ill, whether in the remote future or in our present lives. When, in a marvellous passage, redemptive revelation comes for Dave himself, it comes not with an assurance of knowledge, but a wiping away of it, the glimpse of obliteration:

Dave knew none of it — his Knowledge was gone. The city was a nameless conurbation, its street and shop signs, its plaques and placards, plucked then torn away by a tsunami of meltwater that dashed up the estuary. He saw this as clearly as he’d ever seen anything in his life. The screen had been removed from his eyes, the mirror cast away, and he was privileged with a second sight into deep time.

The strange thing is that the future society is not entirely dystopic. The opening chapter sets the tone beautifully; the peasants take a moto, Runti, with his full naive knowledge to slaughter, reassuring him all the way:

Itun hwurtin, Cwarl. Eye hwurtin sum, the moto protested, and one of his large hands sought out his musher’s smaller one. Onli a lyttul, Runti, onli a lyttul, an itull soon B ovah an yul ave a nyce kip.

This lovely scene, inspired, Self tells us, by of all things the pig-slaughtering scene in that great novel, Little House in the Big Woods, has in many ways an idyllic flavour. It is only really when the travellers get to New London that any kind of dystopia takes full form in the book. Before that, we do start to wonder whether that is all religion is, a communal working out of individual trauma, a burying of hurt under ritual which, whatever its applications, will always soothe its participants.

Self is fascinated by transformations, but they have usually been physical ones in his fiction before now. This is the first time he has really applied his methods to a society, and it pays off handsomely. The Book of Dave, despite its amusing initial idea, is not principally a funny book, but a tender and strange one. A society run according to the ideas of London taxi-drivers in more ordinary hands could only have been a satire; Self is a good enough novelist to go on asking questions of that situation, reaching into peculiarly painful crevices of the mind with steady hands.