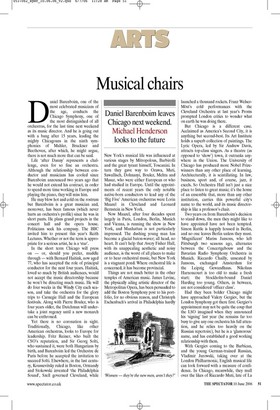 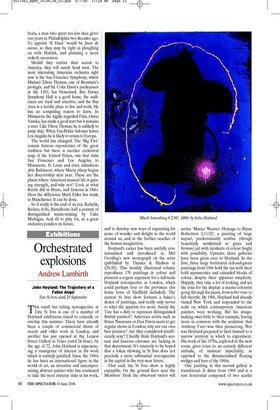 Daniel Barenboim, one of the most celebrated musicians of the age, conducts the Chicago Symphony, one of the most distinguished of all orchestras, for the last time next weekend as its music director. And he is going out with a bang after 15 years, leading the mighty Chicagoans in the ninth symphonies of Mahler, Bruckner and Beethoven, after which, he might argue, there is not much more that can be said.

Life ‘after Danny’ represents a challenge, even for so fine an orchestra. Although the relationship between conductor and musicians has cooled since Barenboim announced two years ago that he would not extend his contract, in order to spend more time working in Europe and playing the piano, they will miss him.

He may blow hot and cold on the rostrum but Barenboim is a great musician and, moreover, has been famous (which never hurts an orchestra’s profile) since he was in short pants. He plans grand projects in the concert hall and the opera house. Politicians seek his company. The BBC invited him to present this year’s Reith Lectures. Whether or not the term is appropriate for a serious artist, he is a ‘star’.

In the short term Chicago will press on — or, should you prefer, muddle through — with Bernard Haitink, now aged 77, who has accepted the role of principal conductor for the next four years. Haitink, loved so much by British audiences, would not accept the music directorship because he won’t be directing much music. He will do four weeks in the Windy City each season, and take the orchestra for the glory trips to Carnegie Hall and the European festivals. Along with Pierre Boulez, who is four years older, the Dutchman will undertake a joint regency until a new monarch can be enthroned.

Yet there is no coronation in sight. Traditionally, Chicago, like other American orchestras, looks to Europe for leadership. Fritz Reiner, who built the CSO’s reputation, and Sir Georg Solti, who sustained it, were both Hungarians by birth, and Barenboim led the Orchestre de Paris before he accepted the invitation to succeed Solti. Elsewhere, in the last century, Koussevitsky ruled in Boston, Ormandy and Stokowski invented ‘the Philadelphia Sound’, Szell governed Cleveland, while New York’s musical life was influenced at various stages by Mitropolous, Barbirolli and the great tyrant himself, Toscanini. In turn they gave way to Ozawa, Muti, Sawallisch, Dohnanyi, Boulez, Mehta and Masur, who were either European or who had studied in Europe. Until the appointments of recent years the only notable native-born conductors to lead any of the ‘Big Five’ American orchestras were Lorin Maazel in Cleveland and Leonard Bernstein in New York.

Now Maazel, after four decades spent largely in Paris, London, Berlin, Munich and Vienna, is running the show in New York, and Manhattan is not particularly impressed. The dashing young man has become a glacial baton-waver; all head, no heart. It can’t help that Avery Fisher Hall, with its unappealing aesthetic and noisy audience, is the worst of all places to make or to hear orchestral music, but New York is a stagnant pond. Where orchestral life is concerned, it has become provincial.

Things are not much better in the other temples of American music. James Levine, the physically ailing artistic director of the Metropolitan Opera, has been persuaded to add the Boston Symphony post to his portfolio, for no obvious reason, and Christoph Eschenbach’s arrival in Philadelphia hardly launched a thousand rockets. Franz WelserMöst’s cold performances with the Cleveland Orchestra at last year’s Proms prompted London critics to wonder what on earth he was doing there.

But Chicago is a different case. Acclaimed as America’s Second City, it is anything but second-best. Its Art Institute holds a superb collection of paintings. The Lyric Opera, led by Sir Andrew Davis, attracts top-class singers. As a theatre (as opposed to ‘show’) town, it outranks anywhere in the Union. The University of Chicago has produced more Nobel Prizewinners than any other place of learning. Architecturally, it is scintillating. In law, business, sport and, of course, jazz, it excels. So Orchestra Hall isn’t just a nice place to listen to great music; it’s the home of an ensemble that, more than any other institution, carries this powerful city’s name to the world, and its music directorship is like a professor’s chair.

Two years on from Barenboim’s decision to stand down, the men they might like to have appointed have not been tempted. Simon Rattle is happily housed in Berlin, and no one leaves Berlin unless they must. ‘Magnificent’ Mariss Jansons, who left Pittsburgh two seasons ago, alternates between the Concertgebouw and the Bavarian Radio Symphony Orchestra in Munich. Riccardo Chailly, unseated by Jansons, exchanged Amsterdam for the Leipzig Gewandhaus. Nikolaus Harnoncourt is too old to make a fresh start; the Stockholm-bound Daniel Harding too young. Others, in between, are not considered ‘officer class’.

Had they been bolder Chicago might have approached Valery Gergiev, but the London Symphony got there first. Gergiev’s appointment may not be quite the coup that the LSO imagined when they announced his ‘signing’ last year (he remains far too busy to give any one orchestra his full attention, and he relies too heavily on the Russian repertoire), but he is a ‘glamorous’ name, and has established a good working relationship with them.

With Gergiev coming to the Barbican, and the young German-trained Russian, Vladimir Jurowski, taking over at the London Philharmonic, English musical life can look forward with a measure of confidence. In Chicago, meanwhile, they mull over the likes of Riccardo Muti, late of La Scala, a man who spent ten less than glorious years in Philadelphia two decades ago. To appoint ‘Il Duce’ would be faute de mieux, so they may be right in ploughing on with Haitink, and planning a more orderly succession.

Should they restrict their search to America, they will surely head west. The most interesting American orchestra right now is the San Francisco Symphony, where Michael Tilson Thomas, one of Bernstein’s protégés, and Sir Colin Davis’s predecessor at the LSO, has blossomed. But Davies Symphony Hall is a good home, the audiences are loyal and attentive, and the Bay Area is a terrific place to live and work. He has no compelling reason to leave. In Minnesota the highly regarded Finn, Osmo Vanska, has made a good start but it remains a start. Like Tilson Thomas, he is unlikely to jump ship. When Esa-Pekka Salonen leaves Los Angeles he is likely to return to Europe.

The world has changed. The ‘Big Five’ remain famous repositories of the great tradition but there is another orchestral map of the United States, one that links San Francisco and Los Angeles to Minnesota, St Louis and even unfashionable Baltimore, where Marin Alsop begins her directorship next year. These are the places where American musical life is gaining strength, and why not? Look at what Rattle did in Brum, and Jansons in Oslo. Hear the difference Mark Elder has made in Manchester. It can be done.

So it really is the end of an era. Kubelik, Reiner, Solti, Barenboim: half a century of distinguished music-making by Lake Michigan. And all to play for, as a great orchestra ponders its future.