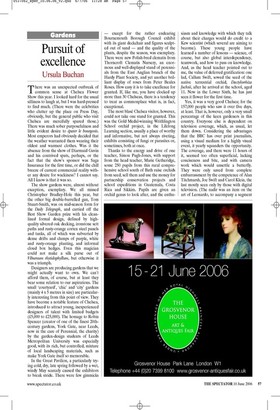 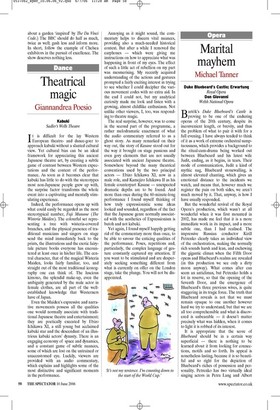 There was an unexpected outbreak of common sense at Chelsea Flower Show this year. I looked hard for the usual silliness to laugh at, but I was hard-pressed to find much. (There were the celebrities who clutter up the place on Press Day, obviously, but the general public who visit Chelsea are mercifully spared those.) There was much sober purposefulness and little evident desire to épater le bourgeois. Most emperors had obviously decided that the weather warranted them wearing their oldest and warmest clothes. Was it the absence from the show of Diarmuid Gavin and his contrived spats, perhaps, or the fact that the show’s sponsor was Saga Insurance for the first time, or did the chill breeze of current commercial reality wither any desire for wackiness? I cannot say. All I know is that it was so.

The show gardens were, almost without exception, exemplary. We all missed Christopher Bradley-Hole this year, but the other big double-barrelled gun, Tom Stuart-Smith, was on mid-season form for the Daily Telegraph, and carried off the Best Show Garden prize with his cleanlined formal design, defined by highquality silvered oak decking, ironstone sett paths and rusty-orange corten steel panels and tanks, all of which was subverted by dense drifts and clumps of purple, white and rusty-orange planting, and informal cloud box hedges. Even this magician could not make a silk purse out of Viburnum rhytidophyllum, but otherwise it was a triumph.

Designers are producing gardens that we might actually want to own. We can’t afford them, of course, but at least they bear some relation to our aspirations. The small ‘courtyard’, ‘chic’ and ‘city’ gardens (mainly 4 x 5 metres in size) are particularly interesting from this point of view. They have become a notable feature of Chelsea, introduced to attract young, inexperienced designers of talent with limited budgets (£5,000 to £25,000). The homage to Robin Spencer (creator of one of the finest 20thcentury gardens, York Gate, near Leeds, now in the care of Perennial, the charity) by the garden-design students of Leeds Metropolitan University was especially good, with its rich, but controlled, mixture of local landscaping materials, such as make York Gate itself so memorable.

In the Great Pavilion, a particularly trying cold, dry, late spring followed by a wet, windy May scarcely caused the exhibitors to break stride. There were few gimmicks — except for the rather endearing Bournemouth Borough Council exhibit with its giant deckchair and figures sculpted out of sand — and the quality of the plants, despite the season, was exemplary. There were new Polish-bred clematis from Thorncroft Clematis Nursery, an enormous and well-displayed stand of perennials from the East Anglian branch of the Hardy Plant Society, and yet another brilliant display of roses from Peter Beales Roses. How easy it is to take excellence for granted. If, like me, you have clocked up more than 30 Chelseas, there is a tendency to treat as commonplace what is, in fact, exceptional.

The most blasé Chelsea visitor, however, could not take one stand for granted. This was the Gold Medal-winning Writhlington School orchid project, in the Lifelong Learning section, usually a place of worthy and informative, but not always riveting, exhibits consisting of fungi or parasites or, sometimes, both at once.

Thanks to the energy and drive of one teacher, Simon Pugh-Jones, with support from the head teacher, Marie Getheridge, some 250 pupils from this rural comprehensive school south of Bath raise orchids from seed, sell them and use the money for partnership conservation projects and school expeditions in Guatemala, Costa Rica and Sikkim. Pupils are given an orchid genus to look after, and the enthu siasm and knowledge with which they talk about their charges would do credit to a Kew scientist (which several are aiming to become). These young people have learned a number of lessons — science, of course, but also global interdependency, teamwork, and how to pass on knowledge. And, as the head teacher pointed out to me, the value of deferred gratification: one lad, Callum Swift, sowed the seed of the native terrestrial orchid, Dactylorrhiza fuchsii, after he arrived at the school, aged 11. Now in the Lower Sixth, he has just seen it flower for the first time.

Yes, it was a very good Chelsea; for the 157,000 people who saw it over five days, at least. That is, however, only a very small percentage of the keen gardeners in this country. Everyone else is dependent on television coverage, which, as usual, let them down. Considering the advantages that the BBC has over print journalists, using a visual medium for a highly visual event, it yearly squanders the opportunity. The coverage, and there were 11 hours of it, seemed too often superficial, lacking conciseness and bite, and with camera work which would unsettle a butterfly. They were only saved from complete embarrassment by the competence of Alan Titchmarsh, Joe Swift and Carol Klein, the last mostly seen only by those with digital television. (The nadir was an item on the art of Leonardo, to accompany a segment about a garden ‘inspired’ by The Da Vinci Code.) The BBC should do half as much, twice as well; gush less and inform more. In short, follow the example of Chelsea exhibitors in the pursuit of excellence. The show deserves nothing less.