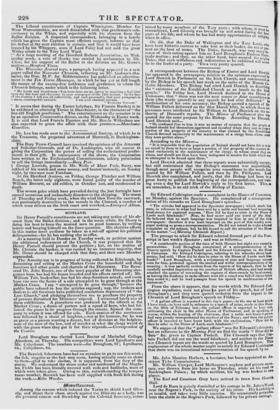 Sir Henry Parnell's constituents are not taking any notice of his ab- sence from the Ballot division; and in the mean while, Sir Henry is doing his best to keep the monied men in good humour, by writing letters and busying himself on the linen question. His abortive efforts in this matter must perforce be taken as a set.off against his political delinquencies—for he has nothing else to offer. At a meeting held in Dundee on Tuesday week, to petition against the additional endowment of the Church, it was proposed that Sir Henry Parnell should present the petition ; but, on the motion of Mr. Christie the banker, it was carried by an immense majority, that Mr. Hume should be charged with that duty, and their own Member superseded.

The Annuity-tax is in progress of being collected in Edinburgh, by distreining and selling at the Market Cross the household and shop furniture and other goods and chattels of the Dissenters. The Reve- rend Dr. John Brown, one of the most popular of the Dissenting cler- gymen here, has had his house invaded and his effects carried off; Mr. William Tait, bookseller, has had his shop-furniture seized; and every hour one sees the forms of a sale attempted to be gone through at the Market Cross. I say " attempted to be gone through," because the public have refused to buy the articles exposed; nay, the brokers and dealers ia old furniture have published resolutions deprecatory of " the Law-Church," and pledging themselves nor to purchase the property of persons distrained for Ministers' stipend. I witnessed lately one of these exhibitions. A pianoforte was produced by the officers at the Market Cross ; a dozen of porters and a squad of boys, who had fol- lowed the piano in its progress through the streets, formed the com- pany to whom it was offered for sale. Each oration of the auctioneer was followed by a shout of laughter,—not at his humour, for he was as grave as a parson wanting a dinner, but of derision at the helpless- ness of the men of the law, and of wonder at what the clergy would do with the piano when they got it for their stipends.—Correspondent of the Courier.