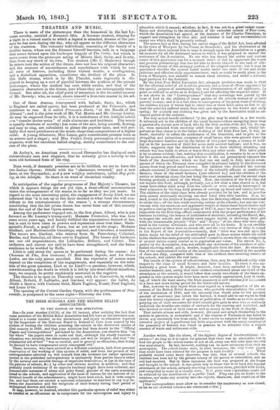 THE IRISH SCHOOLS AND THE BRITISH RELIEF ASSOCIATION.

Sta—In your number (1079) of the 3d instant, after noticing the fact that some members of the British Relief Association had felt hurt at the strictures con- tained in a recent number on the disturbance and injury to education reported by the Inspectors of the National Board in Ireland to have been caused by the system of feeding the children attending the schools in the distressed unions of that country in 1848, and that your attention had been drawn to the "Official Papers and Correspondence" published by the Association, you observe that "on the whole" the papers seem to make out that, although the steady business of education was invaded, the disturbance could not well be helped; and that "the substantial aid of food" "was so needful, and in general so efficacious, that it may be deemed to have compensated every consequent evil." Those, however, who have arrived at a different conclusion, both from personal observation of the working of that system of relief, and from the perusal of the correspondence adverted to, will remark that the evidence (or rather opinions) quoted in the published correspondence is exclusively from parties biassed either by the natural and amiable feelings of impulsive benevolence, or (as in the case of the patrons of schools, &e.) by other and obvious motives in addition: and that probably much testimony of an opposite tendency might have been collected, and Innumerable instances of abuse and petty fraud, plunder of the carts conveying bread to the schools, and application of the issue of rations for the indirect or in- dividual benefit of the schoolmasters, might have been cited, had it been sought for, and had there not existed a universal reluctance to inteifere in any way be- tween the Association and the recipients of their bounty during that period of widespread distress and misery.

It may, however, be doubted, whether this particular system of relief was either SO needful or so efficacious as to compensate for the interruption and injury to