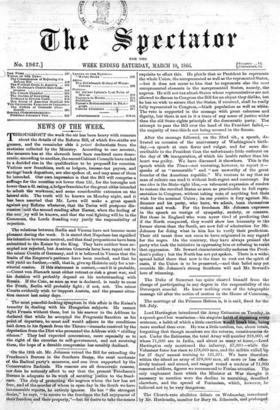 Lord Hartington introduced the Army Estimates on Tuesday, in,

a speech good but wearisome—his singular la eve sentence, a habit of which a little exertion se [dm, being more marked than ever. He was a little careless, too, about totals, forgetting that though members see the returns, constituencies do not. Under the Estimates, the total Army will number 213,000, of whom 71,000 are in India, and about as many at home,—Lord Hartington only mentioned the infantry, 57,000—while the Volunteer force has risen to 178,000 men, and the militia called iv for 27 days' annual training to 121,971. We have therefore within the island an army of 378,000 men, all more or less effec- tively trained and armed, and ranged round a nucleus of 71,000 seasoned soldiers, figures we recommend to Fenian attention. The only unpleasant facts which the Minister at War thought it necessary to mention were the decline in recruiting, described elsewhere, and the spread of Fenianism, which, however, he believed not to be very dangerous.