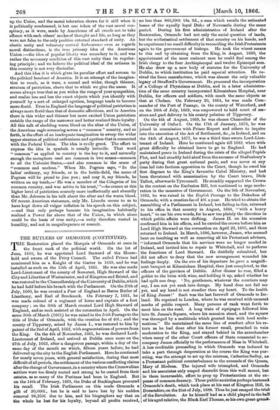 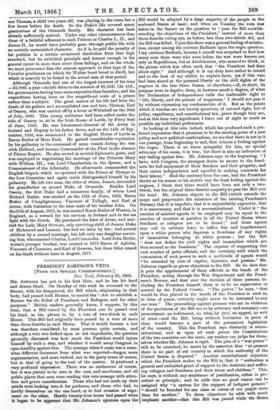 E Restoration placed the Marquis of Ormonde at once in the front rank of the politkal world. On the 1st of June, 1660, he was appointed Lord Steward of the House- hold and sworn of the Privy Council. The exiled Prince had nominated him as a Knight of the Garter in 1649, and he was installed as such on the 15th of April, 1661. He was also made Lord-Lieutenant of the county of Somerset, High Steward of the City and Liberties of Westminster, and of Kingston and Bristol, and was restored to the Chancellorship of the Universityof Dablin,which he had held before his breach with the Parliament. On the 20th of July, 1660, he was created a Peer of England as Baron Butler of Llanthony, and Earl of Brecknock. On February 7, 1661, he was made colonel of a regiment of horse and captain of a foot company ; on the 30th of March created Lord High Steward of England, and as such assisted at the coronation in April. On the same 30th of March (1661) he was raised in the Irish Peerage to the title of Duke of Ormonde, with the creation fee of 401.; and the county of Tipperary, seized by Janies I., was restored to him by patent of the 2nd of April, 1662, with augmentations of powers from the King. On the 4th of November, 1661, he was declared Lord- Lieutenant of Ireland, and arrived at Dublin once more on the 27th of July, 1662, after a dangerous passage, within a day of the same day of the month on which, fifteen years before, he had delivered up the city to the English Parliament. Here he continued for nearly seven years, with general satisfaction, during that most difficult of all periods, the settlement of the various conflicting claims after the change of Government, in a country where the Cromwellian settlers were too firmly rooted and strong to be ousted from their estates, as so many of the Puritans had been in England. But on the 14th of February, 1669, the Duke of Buckingham procured his recall. The Irish Parliament on this made Ormonde a gift of 30,0001., but he is said to have lost by his sudden removal 98,2501. due to him, and his biographers say that on the whole he lost for his loyalty, beyond all profits received,

no less than 860,5901. 16s. 9d., a sum which recalls the estimated losses of the equally loyal Duke of Newcastle during the same period. During his first administration of Ireland after the Restoration, Ormonde had not only the social question of lands, but the ecclesiastical settlement of that country on his hands, and he experienced no small difficulty in reconciling the Irish Protestants again to the government of bishops. He took the wisest means to this end by obtaining from the King, in August, 1660, the appointment of the most eminent men he could find among the Irish clergy to the four Archiepiscopal and twelve Episcopal sees. He also drew up a new body of statutes for the University of Dublin, to which institution he paid especial attention. He re- vived the linen manufacture, which was almost the only valuable legacy of Strafford's Government. He procured the incorporation of a College of Physicians at Dublin, and in a later administra- tion of the same country incorporated Kilmainham Hospital, near• Dublin, for officers and soldiers, with much the same objects as that at Chelsea. On February 20, 1664, he was made Com- mander of the Port of Passage, in the county of Waterford, and on the 24th of July, 1669, was empowered to hold court of ses- sions and gaol delivery in his county palatine of Tipperary.

On the 4th of August, 1669, he was chosen Chancellor of the University of Oxford. On the 17th of January, 1673, he was joined in commission with Prince Rupert and others to inquire into the execution of the Act of Settlement, &c., in Ireland, and on the 24th of August, 1677, he was a third time sworn Lord-Lieu- tenant of Ireland. Here he continued again till 1682, when with great difficulty he obtained leave to go to England. He had maintained peace in Ireland during the crisis of the alleged Popish Plot, and had steadily held aloof from the excesses of Shaftesbury's

party during that great national panic, and was never at any- time led into factious opposition to the Court, though he owed his

first disgrace to the King's favourite Cabal Ministry, and ha& been threatened with assassination by the Court bravo, Dick Talbot, afterwards Tyrconnell. He steadily supported the Crown in the contest on the Exclusion Bill, but continued to urge mode- ration in the measures of Government. On the 9th of November,

1682, he was raised in the English Peerage to the Dukedom of Ormonde, with a creation fee of 401. a year. He tried to obtain the assembling of a Parliament in Ireland, but failing in this, returned to his office in that country in August, 1684, "with a heavy heart," to use his own words, for he saw too plainly the direction in which public affairs were drifting. James II. on his accession confirmed him in his offices, and he carried the crown before him as Lord High Steward at the coronation on April 23, 1685, and then returned to Ireland. In March, 1686, however, James, who seemed bent on insulting as well as removing all his Protestant advisers,

"informed Ormonde that his services were no longer needed hr Ireland, and invited him to repair to Whitehall, and to perform.

the functions of Lord Steward. He dutifully submitted, but did not affect to deny that the new arrangement wounded his feelings deeply. On the eve of his departure he gave a magnifi- cent banquet at Kihnainham Hospital, then just completed, to the

officers of the garrison of Dublin. After dinner he rose, filled a goblet to the brim with wine, and holding it up, asked whether he

had spilt one drop. No, gentlemen, whatever the courtiers may say, I am not yet sunk into dotage. My hand does not fail me yet, and my hand is not steadier than my heart. To the health of King James!' Such was the last farewell of Ormonde to Ire- land. He repaired to London, where he was received with unusual marks of public respect. Many persons of rank went forth to meet him on the road. A long train of equipages followed him into St. James's Square, where his mansion stood, and the square was thronged by a multitude which greeted him with loud accla- mations." He maintained the same line of conduct after his re- turn as he had done after his former recall, preached in vane moderation to the King, and stayed behind in the antechamber when many of the other Court officers of State consented to ac- company James officially to the performance of Mass in Whitehall-

A less creditable proceeding in which Ormonde was induced to take a part through desperation at the course the King was pur- suing, was the attempt to set up the mistress, Catherine Sedley,

a Protestant political counterbalance to the counsels of the Queens Mary of Modena. The injured wife triumphed, and Ormonde and his associates only reaped discredit from this well meant, but. in them inexcusable, effort to prop up Protestantism at the ex- pense of common decency. These public anxieties perhaps hastened

Ormonde's death, which took place at his seat of Kingston Hill, in. Dorsetshire, on the 21st of July, 1688. Thus he just escaped the trial of the Revolution. As he himself had as a child played in the halt of his aged relative, the Black Earl Thomas, so his own great-grand-

son Thomas, a child two years old, was playing in the room but a Bill would be adopted by a large majority of the people in the

few hours before his death. So the Duke's life covered many generations of the Ormonde family. His character has been already sufficiently noticed. Under any other circumstances than those of a faithful adherent to such Princes as Charles L, II., and James IL, he would have probably gone through public life with an entirely untarnished character. As it is, he paid the penalty of his position in a certain occasional dereliction from that high standard, but he exhibited principle and honour enough in his general career to more than cover these failings, and on the whole we must pronounce him the nearest approach to that type of the Cavalier gentleman on which Sir Walter Scott loved to dwell, but which is scarcely to be found in the actual men of that period.

Although Ormonde had one of the largest incomes of his time —22,0001. a year —he left debts to the amount of 89,324/. 13s. 10d., his governments having been more expensive than lucrative, and his expenditure having been on the magnificent scale of a prince rather than a subject. The great sorrow of his life bad been the death of his gallant and accomplished son and heir, Thomas, Earl of Ossory, who was carried off by a fever at Whitehall on the 30th of July, 1680. This young nobleman had been called under the title of Ossory to sit in the Irish House of Lords, by Privy Seal of June, 1663. He was Lieutenant-General of the Army in Ireland and Deputy to his father there, and on the 14th of Sep- tember, 1666, was summoned to the English House of Lords as Baron Butler of More Park. He gained considerable reputation by his gallantry in the command of some vessels during the war with Holland, and became Commander of the Fleet in the absence of Prince Rupert. He also served in several diplomatic posts, and was employed in negotiating the marriage of the Princess Mary with William IH., was Lord Chamberlain to the Queen, and a Commissioner of the Admiralty. He afterwards commanded the English brigade which co-opsrated with the Prince of Orange in the Low Countries, and again much distinguished himself by his gallantry. He left two sons, the elder of whom, James, succeeded his grandfather as second Duke of Ormonde. Besides Lord Ossory, the first Duke had a numerous family, of whom Lord Richard Butler, was created on the 13th of June, 1662, Baron Butler of Cloughgrennan, Viscount of Tullogh, and Earl of Arran, with limitation to the issue male of his brother John. On the27th of August, 1673, he was created Baron Butler of Weston, in England, as a reward for his services in Ireland and in the sea fight with the Dutch. He purchased the Isles of Arran, and mar- ried the Lady Mary Stewart, only surviving child of James, Duke of Richmond and Lennox, but had no issue by her ; had several children by a second marriage, but left only one daughter surviv- ing him, who married Charles, Lord Cornwallis. Lord John Butler, Arran's younger brother, was created in 1676 Baron of Aghrim, Viscount of Clonmore, and Earl of Gowran, but these titles ceased on his death without issue in August, 1677.