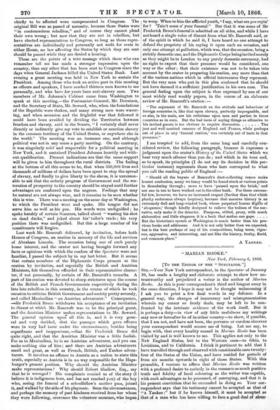 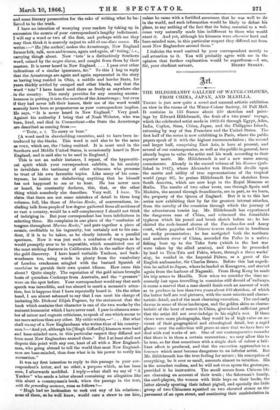 [To THE EDITOR OF THE " SPECTATOR."] SIR,--Your New York correspondent, in the Spectator of January 20, has made a lengthy and elaborate attempt to show how un- trustworthy and prejudiced a writer is the author of Marian Rooke. As this is your correspondent's third and longest essay in the same direction, I hope it may not ba thought unbecoming if I ask you to print a few final words in my defence. In a general way, the charges of inaccuracy and misrepresentation wherein my censor so freely deals, may be left to be con- fronted by the intrinsic evidence of the work itself. But it is perhaps a duty—in view of any little usefulness my writings may now or hereafter be of in either country—to show, if possible, that I am not, and have not been, the perverse or careless observer your correspondent would accuse me of being. Let me say, to begin with, that every locality named in Marian Rooke has been visited by and is well known to me. This applies not only to the NeiV England States, but to the Western ones—to Ohio, to Louisiana, and to California. I think it pertinent to add that I have travelled through and observed with considerable care twenty- four of the States of the Union, and have resided for periods of from six months upwards in eight of those States. With this preamble, I venture to affirm that Marian Rooke was written with a profound desire to embody iu the romance as much positive truth and fidelity of local colouring as the writer was capable, with such advantages as he possessed, of conveying, and that it ie his present conviction that he succeeded in doing so. Your cor- respondent says that his testimony cannot be accepted as that of "a Yankee ;" but if he knows himself, it must be accepted as that of a man who has been willing to face a good deal of abuse

and some literary persecution for the sake of writing what he be- lieved to be the truth.

I have no intention of wearying your readers by taking up in succession the counts of your correspondent's lengthy indictment. I will say a word or two of the first, and perhaps with me they may then think it is scarcely unjust to add ab uno disco onuses. He writes :—" He [the author] makes the Armstrongs, New England farmer folk, talk, men and women, again and again, of ' toting,' e., carrying things about. Now tote' is a distinctively Southern word, coined by the negro slaves, and caught from them by their masters. It is never heard in New England. . . . I pass over other indications of a similar ignorance, &c." To this I beg to reply that the Armstrongs are again and again represented in the story as having long resided in Ohio, a middle and border State, for years thickly settled by escaped and other blacks, and that the word " tote " I have heard used there as freely as anywhere else _ in the country. This surely provides for any seeming anoma- lousness in putting it into the mouths of the Armstrongs ; but even if they had never left their homes, their use of the word would scarcely have been so preposterous as your correspondent implies. He says, " It is never heard in New England." Very good. Against his authority I bring that of Noah Webster, who was born, lived, and died in Connecticut—the State the Armstrongs are described as coming from :— " TOTE, v. t. To carry or bear."

[A word used in slaveholding countries, said to have been in- troduced by the blacks. This word is said also to be the same as 'mix, which see, the 1 being omitted. It is most used in the Southern and Middle United States, is occasionally heard in New England, and is said also to be used in England.] This is not an unfair instance, I repeat, of the hypercriti- cal spirit which your correspondent exhibits, in his anxiety to invalidate the testimony of other witnesses who presume to treat of his own favourite topics. Like many of his coun- trymen, he insists on disbelieving anything that he himself has not happened to see or to hear. He has never seen or heard, he constantly declares, this, that, or the other thing which somebody else describes. Very well. I have. To claim that there are not some mistakes of detail in three long volumes, full, like those of Marian Rooks, of conversations, in- cluding talk from people of low degree gathered from all sections of so vast a country, would be a self-complacency I should not think of indulging in. But your correspondent has been infelicitous in selecting them. He complains in one place of the " confusion of tongues throughout Marian Rooks," and puts together a piece of . mosaic, creditable to his ingenuity, but certainly not to his can- dour, if it is to be taken, as he clearly intends, as a parallel specimen. Now it was just such a confusion of tongues as he would promptly aver to be impossible, which constituted one of the most striking features in Californian life in the earlier days of the gold discovery. I have heard veritable Yankees, and back- woodsmen too, using words in plenty from the vocabulary of London. crackamen mingled with the bastard Spanish of ranchgros to garnish their own quaint idioms. How came this about? Quite simply. The reputation of the gold mines brought hosts of quondam Cockneys from Australia, and the " greasers" were on the spot before. Your correspondent would say that such speech was incredible, and too absurd to merit a moment's atten- tion, but it happens that I have repeatedly heard it. On the other hand, I am almost ashamed to say that I can meet his charge of imitating Mr. Dickens' Elijah Pogrom, by the statement that the book which contains that character is one of the two works by the eminent humourist which I have never read. I pass in silence a num- ber of minor and cognate criticisms, to speak of one which seems to me more serious than any other. My critic writes,—" . . . But what shall we say of a New Englandman who writes thus of his country- men ?—'And yet, although his [Hugh Gifford's] kinsmen were hard and base-minded men, in this particular respect they differed not from most New Englanders around them.' But I at least shall not dispute this point with any one, least of all with a New England- man, who going abroad to tell the world that most New England- men are base-minded, thus does what is in his power to verify his accusation."

It was my first intention to reply to this passage in your cor- respondent's letter, and no other, a purpose which, as has been seen, I afterwards modified. I reply—what shall we say of "A Yankee" who sends a letter abroad containing an allegation like this about a countryman's book, when the passage in the text, with the preceding sentence, runs as follows ?-

"Hugh had no inclination to seek out any of his relations ; none of them, as he well knew, would care a straw to see him,

unless he came with a fortified assurance that he was well to do in the world, and such information would be likely to defeat his plans, to say nothing of the fact that its being essential to a wel- come very naturally made him indifferent to those who would exact it. And yet, although his kinsmen were otherwise hard and base-minded nien, in this particular respect they differed not from most New Englanders around them."

I italicize the word omitted by your correspondent merely to call attention to it. You will probably agree with me in the opinion that further explanation would be superfluous.—I am,