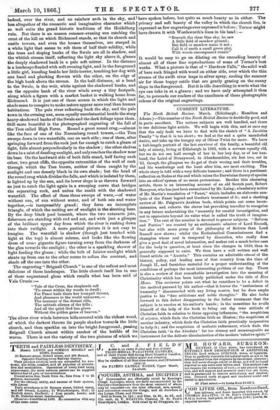 The North British Review. March. (Edinburgh : Hamilton and Adams.)—This number of the North British Review is decidedly good, and in parts excellent. The serious subjects are well handled, and there is one delicious light article. We will begin with this, and at once say that the only fault we have to find with the sketch of "A Jacobite Family " is that it is too short ; we feel at the end a quite unsatisfied desire, and take up the hungry cry of Oliver Twist for more. We have a full-length portrait of the last survivor of the family, a beautiful old lady of ninety, living at Edinburgh in 1805, with a servant equally old, but we do not see half enough of her in her hey day, or of her hus- band, the Laird of Stoneywood, in Aberdeenshire, six feet two, out in '45, though the glimpses we do get of their wooing and their troubles, and his wanderings and the hunt after him, are moat exciting. The whole story is told with a very delicate humour ; and there is a pertinent reflection on Dodos at the end which raises the Darwinian theoryof species into an ethical system of no mean pretensions. Besides this charming article, there is an interesting account of an old Scotch poet, Robert Henryson, who has just been resuscitated by Mr. Laing ; a laudatory notice of Mr. Martin's translation of "Faust," which includes an elaborate ana- lysis of the Faust legend and Goethe's treatment of it; and a slashing review of Mr. Palgrave's Arabian book, which points out some incon- sistencies, and exhorts the clever but provoking traveller to recognize in any future undertaking the "necessity for careful investigation, and not to appreciate beyond its value what is called the truth of imagina- tion." The rest of the number is devoted to graver subjects. "Reform and Parties" are treated by an enthusiastic admirer of Lord Russell, but also with more grasp of the philosophy of Reform than Lord Russell now shows ; whilst' the Ecclesiastical Commissioners find a champion whose zeal is tempered by discretion, who really does give a good deal of novel information, and makes out a much better case for the body in question, at least since the changes in 1850, than is generally supposed to exist. We then have a well written and well timed article on "Austria." This contains an admirable rfaund of the history, policy, and leading men of that country from the time of Joseph IL, and furnishes material for a proper understanding of the conditions of perhaps the most interesting problem of our day. There is also a review of that remarkable investigation into the meaning of Christianity which has been lately published under the title of Ecce Homo. The reviewer points out what he considers to be a defect in the method pursued by his author—that it loaves the "enthusiasm of humanity " disconnected with any living source, but he does ample justice to his "fine criticisms and noble thoughts." He also looks forward to this defect disappearing in the fuller treatment that the subject is to receive at his author's hands ; in the meantime he avails himself of the help of the book to bring out thp true attitude of Christian faith in relation to three opposing influences, "the scepticism of science, which finds the Christian faith an illusion ; the scepticism of secular industry, which finds the Christian faith practically inoperative to help it; and the scepticism of aesthetic refinement, which finds the Christian faith in the Absolute' far too clumsy and unmanageable an instrument for the delicate discrimination of the modern 'relative spirit."