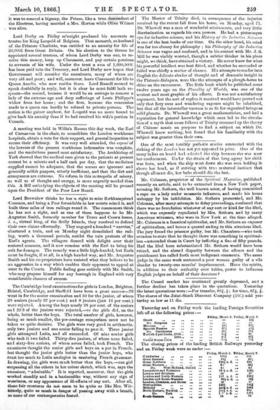 Page 3, 10 March 1866 — The Master of Trinity died, in consequence of the injuries
Close

The Master of Trinity died, in consequence of the injuries

received by the recent fall from his horse, on Monday, aged 71. Dr. Whewell was a man of wonderful attainments, and very little discrimination as regards his own powers. He had a picturesque eye for inductive science, and his History of the Inductive Sciences is one of the best books of our time. On the other hand, his mind was far too clumsy for philosophy ; his Philosophy of tlie Inductive Sciences was vague and confused, and in his contest with Mr. J. S. Mill he was visibly worsted, though a subtler thinker in his place might, we think, have obtained a victory. He never knew for what his powerful intellect was best fitted, and whether he succeeded or failed was chiefly a matter of chance. His attempts to render into English the delicate shades of thought and of dramatic insight in the Platonic dialogues, were like the attempts of a plough-horse to shine on the racecourse. The little book which he published some twelve years ago on the Plurality of Worlds, was one of the neatest and most graphic of his efforts. It was not a satisfactory argument, but the sort of replies it received would have proved not only that fiery suns and wandering vapours might be inhabited, but that all the interstellar vacuum is as fit for organized beings as solid planets. Dr. Whewell was a great mathematician, and had a reputation for general knowledge which once led to the circula- tion of a myth that some fellows of Trinity crammed up the theory of Chinese music on purpose to find a subject on which Dr. Whewell knew nothing, but found that his familiarity with the subject was greater than their own.