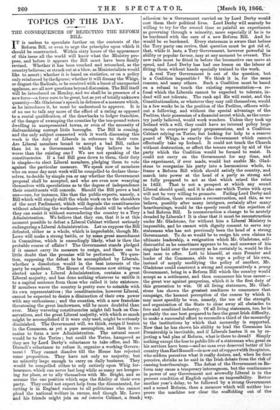 THE CONSEQUENCES OF REJECTING THE REFORM BILL.

IT is useless to speculate further on the contents of the Reform Bill, or even to urge the principles upon which it should be constructed. Within sixty hours of the appearance of this issue all the world will know what the Ministry pro- pose, and before it appears the Bill must have been finally revised. Whether it has been touched and retouched, as the country believes; or struck out at a blow, as Ministerialists would like to assert ; whether it is based on statistics, or on a policy only reinforced by the figures; whether it will dismay the Whigs, or disgust the Radicals, or be received with a burst of unexpected applause, are all now questions beyond discussion. The Bill itself will be introduced on Monday, and we shall be in presence of a new force—a force sure to be great, but as yet of totallyunlmown quantity—Mr. Gladstone's speech in defence of a measure which, as he introduces it, he must be understood to approve. It is of no use to talk any more of the effect of a rating as opposed to a rental qualification, of the drawbacks to lodger franchise, of the danger of swamping the counties by the ten-pound voters dwelling in unrepresented towns, or even of the necessity of disfranchising corrupt little boroughs. The Bill is coming, and the only subject connected with it worth discussing this week is the duty of Liberals in reference to their vote. Are Liberal members bound to accept a bad Bill, rather than let in a Government which they believe to be worse than the existing one I We are not speaking of the constituencies. If a bad Bill goes down to them, their duty is simple—to elect Liberal members, pledging them to vote against the particular measure. We speak now of members who on some day next week will be compelled to declare them- selves, to decide by simple yea or nay whether the Government proposal shall be accepted, and who are even now wearying themselves with speculations as to the degree of independence their constituents will concede. Should the Bill prove a bad one—one, for instance, like that the public expects, namely, a Bill which will simply shift the whole work on to the shoulders of the next Parliament, which will degrade the constituencies without admitting the workmen—their doubt will be whether they can resist it without surrendering the country to a Tory Administration. We believe that they can, that it is at this moment possible to defeat a Liberal Cabinet without seriously endangering a Liberal Administration. Let us suppose the Bill defeated, either as a whole, which is improbable, though Mr. Lowe will make a strong battle, or by some great amendment in Committee, which is exceedingly likely, what is then the probable course of affairs ? The Government stands pledged if it cannot carry its measure to resign, and there can be little doubt that the promise will be performed. We ques- tion, supposing the defeat to be accomplished by Liberals, whether a dissolution would in the beet interests of the party be expedient. The House of Commons now sitting was elected under a Liberal Administration, contains a great Liberal majority, and has done nothing whatever to entitle it to a capital sentence from those who called it into existence. If members waver the country is pretty sure to coincide with its own representatives ; the constituencies, however Liberal, cannot be expected to desire a diminution of their own power with any enthusiasm ; and the counties, with a new franchise threatening the great landowners, will be more doubtful than ever. Many wavering constituencies might fall back on Con- servatives, and the great Liberal majority, with which so much might be accomplished if it were only used,• might be seriously diminished. The Government will, we think, resign if beaten in the Commons, as yet a pure assumption, and then it re- mains to farm a new Administration. The natural resort would be to -the Tories ; but could the Tories, hampered as they are by Lord Derby's reluctance to take office, and Mr. Disraeli's reluctance to refuse it, organize a working Govern- ment I They cannot dissolve till the House has rejected some proposition. They have not only no majority, but no minority large enough to carry on daily business. They would be compelled either to rely entirely upon Whig for- bearance, which can never last long while so many are hunger- ing for place, or to ally themselves with Mr. Bright, and so assume the one position which saps the fidelity of their own party. They could not expect help from the discontented, for ratting is in England ruinous to all politicians who cannot plead the national welfare in excuse, and though Mr. Lowe and his friends might join an ad interim Cabinet, a frank

adhesion to a Government carried on by Lord Derby would cost them their political lives. Lord Derby will scarcely be willing to try for the second time so painful an experiment. as governing through a minority, more especially if he is to be burdened with the care of a new Reform Bill. And he would be so burdened. Every statesman is aware that before the Tory party can revive, that question must be got rid of, that, while it lasts, a Tory Government, however powerful in ability or popular favour, may at any moment be overset. The new rails must be fitted in before the locomotive can move at. speed, and Lord Derby has had one lesson on the labour of fitting them without hands specially trained to the work. A real Tory Government is out of the question, but is a Coalition impossible I We think it is, for the same reasons, and many others. Such a Coalition must be based on a refusal to touch the existing representation—a re- fusal which the Liberals cannot be expected to tolerate, in- deed will not tolerate. The rank and file will resist, and the Constitutionalists, or whatever they may call themselves, would in a few weeks be in the position of the Peelites, officers with- out a following, and without the special advantage of the Peelites, their possession of a financial secret which, as the coun- try justly believed, would work wonders. Unless they took up Ireland with a will, they could have no internal policy large enough to overpower party prepossessions, and a Coalition Cabinet relying on Tories, but looking for help to a reserve guard of Whigs, is exactly the Government which cannot effectually take up Ireland. It could not touch the Church without destruction, or affect the tenure except by aid of the

party which the Coalition would be formed to resist. It could not carry on the Government for any time, and the experiment, if ever made, would but enable Mr. Glad- stone to reorganize his party into a harmonious whole, to frame a Reform Bill which should satisfy, the country, and march into power at the head of a party as strong and as fully prepared to act as that which seized the reins in 1832. That is not a prospect at which any sound

Liberal should quail, and it is also one which Tories with eyes will not be very willing to promote. Failing Lord Derby and the Coalition, there remains a reconstruction, and this, as we believe, possibly after many intrigues, certainly after many heartburnings, would be the speedy result of the rejection of a bad Reform Bill. Is reconstruction a change to be acutely dreaded by Liberals I It is clear that it must be reconstruction under Mr. Gladstone, for without him a Liberal Ministry is.

impossible, and he cannot with dignity consent to serve any statesman who has not previously been the head of a strong Government. To do so would be to resign his own claims to ultimate leadership, a resignation which Mr. Gladstone, self- distrustful as he sometimes appears to be, and unaware of his singular hold over the country as he certainly is, would be the last man to offer. Left to himself, at once Premier and leader of the Commons, able to urge a policy of his own, instead of merely modifying the policy of another, Mr. Gladstone could construct a strong and comparatively a young

Government, bring in a Reform Bill which the country would accept as a settlement, and then commence his true career—

the great war against pauperism, which it is the first duty of this generation to win. Of all living statesmen, Mr. Glad- stone has shown the greatest readiness to commence that campaign, the keenest perception of the course by which it may most speedily be won, namely, the use of the strength and organization of the State to clear away all obstacles to free and combined industry. Of all living statesmen, too, he is probably the one best prepared to face the great Irish difficulty, to make a successful effort to reconcile a third of the monarchy to the institutions by which that monarchy is supported- Now that he has shown his ability to lead the Commons his Premiership is inevitable, and if Liberals hasten it on by re- jecting a bad plan of Reform, what is there to dread? Simply nothing except the loss to public life of a statesman who, great as his services have been—and no man ever deserved better of his country thanEarlRussell—is now out of rapport with its opinion, who seldom perceives what it really desires, and, when he does perceive, shrinks as he said in the Irish debate from the risk of causing heartburnings. The defeat of the Government on Re- form may cause a temporary interregnum, but the continuance in power of any Government not avowedly Liberal is in the present condition of English opinion an impossibility. Better another year's delay, to be followed by a strong Government and a sound Reform, than a measure which will neither im- prove the machine nor clear the scaffolding out of the way.