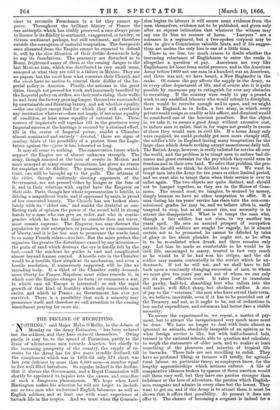 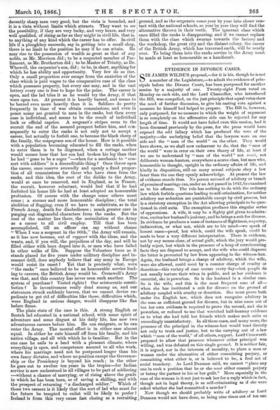 debate of Monday on the Army Estimates, " has been reduced but the soldiers, and they have reduced themselves." Owing partly, it may be, to the spread of Fenianism, partly to the drain of adventurous men towards America, but chiefly to the increasing prosperity of the country, the supply of re- cruits for the Army has for five years steadily declined, till the complement which was in 1861-62 only 574 short, was last year deficient by more than 6,000 men—a number equal to five well filled battalions. So regular indeed is the decline, that it alarms the Government, and a Royal Commission will shortly be appointed to inquire into the causes and remedies of such a dangerous phenomenon. We hope when Lord Hartington makes his selection he will not forget to include one or two men who understand English labourers as well as Pnglish soldiers, and at least one with some experience of barrack life in the tropics. And we trust when th Qommis-- begins its labours it will secure some evidence from the men themselves, evidence not to be published, and given only after an express intimation that whatever the witness may say can do him no manner of harm. " Lawyers " are a nuisance in a regiment, but a free-spoken corporal may be able to give a Commission valuable hints, and if his sugges- tions are useless the only loss is one of a little time.

The plain state of the case is this. A strong English or Scotch lad educated in a national school, with some spirit of adventure and some disgust at his daily life, has now two adventurous careers before him. He can emigrate, or he can enter the Army. The mental effort is in either case almost equal. In either he cuts himself off from his family, and his native village, and all with which he is familiar. But in the one case he sails to a land with a pleasant climate, where everything is open, and competence assured to all who work, where his marriage need not be postponed longer than his own fancy dictates, and where no position except the Governor- ship or the Presidency is beyond his reach ; in the other he goes out to swelter -ten years in the tropics—for Indian service is now understood in all villages to be part of soldiering —without a chance of marrying, or of rising above the grade in which he has been born, or of saving a shilling, and with the prospect of returning " a discharged soldier." Which of those two careers is it likely that the sort of lad who must for the future be tempted to enlist will be likely to prefer ? Ireland is from this very cause fast closing as a recruiting ground, and as the sergeants come year by year into closer con- tact with the national schools, so year by year they will find the alternative thrown in their teeth. The ignorant class which once filled the ranks is disappearing, and if we cannot replace them with the class which swarms towards the factory and the workshop, the great city and the distant colony, the career of the British Army, which has traversed earth, will be nearly over. To bring them into the ranks service in the Army must be made at least as honourable as a handicraft.