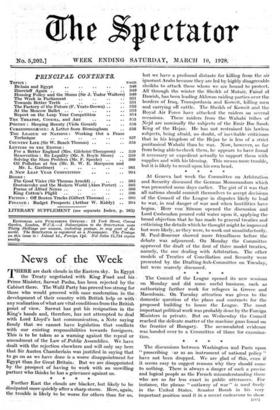 Page 1, 10 March 1928 — At Geneva last week the Committee on Arbitration and Security
Close

At Geneva last week the Committee on Arbitration and Security

discussed the German Memorandum which was presented some days earlier. The gist of it was that all nations should commit themselves to accept decisions of the Council of the League in disputes likely to lead to war, in real danger of war and when hostilities have begun. ' Herr von • Siinson opened the discussion arid Lord Cushendun poured cold water upon it, applying the broad objection that he has made to general treaties and criticizing the details which he thought might be improved but were likely, as they were, to work out unsatisfactorily. M. Paul-Boncour showed more friendliness before the debate was adjourned. On Monday the Committee approved the draft of the first of three model treaties, namely, the one dealing with Arbitration. The other models of Treaties of Conciliation and Security were presented by the Drafting Sub-Committee on Tuesday, but were scarcely : discussed.