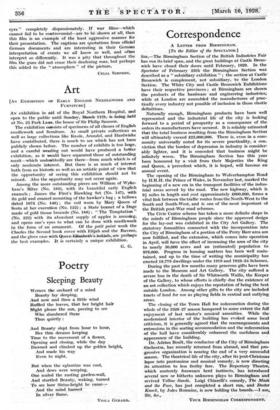 AN exhibition in aid of the Royal Northern Hospital, and open to the public until Sunday, March. 14th,. is...being held at No. 25 Park Lane, the house of Sir Philip Sassoon.

The exhibition consists of specimens of all classes of English needlework and furniture. As small private collections as well as large collections like Knole, Arundel, and Hardwieke have contributed, there is much to see which has not been publicly shown before. The number of exhibits is too large, and a careful weeding out would have produced a better exhibition, as it would have separated those of outstanding merit—which undoubtedly are there—from much which is of only moderate interest. But there is so much of interest both from an historic as well as an artistic point of view that the opportunity of seeing this exhibition should not be missed. Also the opportunity may not occur again.

Among the more outstanding pieces are William of Wyke- ham's Mitre (No. 183), with its beautiful early English enamels ; James the First's Hawking Set (No. 147), with its gold and enamel mounting of the hawker's bag ; a bellows dated 1673 (No. 148) ; the veil worn by Mary Queen of Scots at her execution (No. 122) ; a State bonnet of a Doge made of.gold tissue brocade (No. 188) ; " The Temptation " (No. 222) • with its abundant supply of apples is amusing, and opens one's eyes to what can be done with needlework in the form of- an ornament. - Of the petit point work the Charles the Second book cover with Elijah and the Raveni, and the glove case with Queen-Eiksabeth's-initials, are perhaps the best examples. It is certainly a unique exhibition.