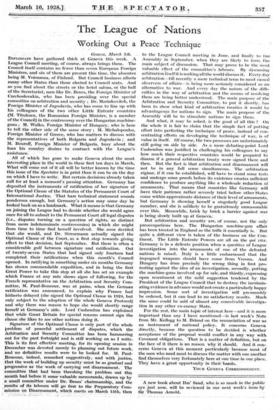 Working Out a Peace Technique

DIPLOMATS have gathered thick at Geneva this week.

League Council meeting, of course, always brings them. The Council itself contains no fewer than seven European Foreign Ministers, and six of them are present this time, the absentee being M. Voionmaa,uf Finland. But Council business affects many .other States -than those elected to Council seats. And so you find about the streets or the hotel salons, or the hall of the-Secretariat, men-like Dr. Benes, the. Foreign Minister of Czechoslovakia, who has been presiding over the special committee on arbitration and security ; Dr. Marinkovitch, the Foreign Minister of Jugoslavia, who has come to line up with his colleagues of the two other Little Entente countries (M. Titulescu, the Rumanian Foreign Minister, is a member of the Council)In the controversy over the Hungarian machine- guns.; M. Walko, Foreign Minister of Hungary, who is here to tell the other side of the same story ; M. Michalopoulos, Foreign Minister of Greece, who has matters to discuss with the representatives of both Bulgaria and Jugoslavia ; and M, Bouroff, Foreign Minister of Bulgaria, busy about the loan his country desires to contract with the League's assistance. -

All of which has gone to make Geneva about the most interesting place in the world in these -first ten days in March. What will come out of it all will be better known by the time this issue of the Spectator is in print than it can be on the day on which I have to write. But certain decisions already taken call for at least a moment's passing attention. Germany has deposited the instruments- of ratification of her signature of the Optional Clause of the Statutes of the Permanent Court of International Justice. That bare technical statement sounds ponderous enough, but Germany's action may some daY looked back on as a landmark. What it means is that Germany on joining the League had to decide whether she would agree once for all to submit to the Permanent Court all legal disputes (i.e., disputes turning on a question of rights, as distinct from more indeterminate controversies) in which she might from time to time find herself involved. She soon decided that she would, and Dr. Stresemann actually signed the Optional Clause of the Court, as a first step towards giving effect to that decision, last September. But there is often a considerable gulf between signature and ratification. Out of twenty-seven States that had signed only fourteen had completed• their • ratifications when this month's Council opened. In ratifying in something under six months Germany has shown commendable expedition, and in being the first Great Power to take this step at all she has set an example which France at any rate shows signs of following, for the French representative on the Arbitration and Security Com- mittee, M. Paul-Boncour, was at pains, when the German ratification was announced, to explain why France had hitherto delayed (she signed the Optional Clause in 1924, but only subject to the adoption of the whole Geneva Protocol) and why there was reason to hope she would shortly range herself at Germany's side. Lord Cushendun has explained that while Great Britain for special reasons cannot sign the clause she likes to see other nations doing it.

Signature of the Optional Clause is only part of the whole problem of peaceful settlement of disputes, which the Arbitration and Security Committee has been hammering out for the past fortnight and is still working on as I write. This is its first effective meeting, for its opening session in December was devoted merely to planning out future work, and no definitive results were to be looked for. M. Paul- /loneour, indeed, remarked suggestively, and with justice, that the work of building up security must be as gradual and progressive as the work of carrying out disarmament. The committee that had been threshing the problem out this month had before it some valuable memoranda, drawn up by a small committee under Dr. Benes' chairmanship, and the results of its labours will go first to the Preparatory Com- mission on Disarmament, which meets on • March 15th, then to the League Council meeting in June, and finally to .tne Assembly in September, when they are likely to form the main subject of discussion. That may prove to be the most valuable effect of the committee's labours. By discussing arbitration itself it is making all the world discuss it. Every day arbitration—till recently a mere technical term to most casual observers of affairs—is being more seriously considered as an alternative to war. And every day the nature of the diffi- culties in the way of arbitration and the means of resolving them are being better understood. The main purpose of the Arbitration and Security Committee, to put it shortly, has been to show what kind of arbitration treaties it would be advantageous for nations to sign. The main purpose of the Assembly will be to stimulate nations to Sign them.

And what, it may be asked, is the good of all this ? On the 'whole it is fair to claim that the simple fact of putting effort into perfecting the technique of peace,. instead of con- centrating efforts on developing the technique of war, is of value in itself. Of course, the two processes are unfortunately still going on side by side. As a mere debating-point Lord Cushendun was justified in challenging his colleagues to say how much their respective countries would be prepared to disarm if a general arbitration treaty were signed there and then. But the fact is that arbitration and disarmament will not be in any full sense simultaneous. The arbitration regime, if it can be established, will have to stand some tests and undergo some proofs before its existence creates sufficient confidence to produce anything like a wholesale reduction of armaments. That means that countries like Germany will have their patience rather severely tried before other States come within approximate distance-of their level of armaments, but Germany is showing herself a singularly- good League member, and she is unlikely to be gratilitously unreasonable over this. Meanwhile, brick by brick a barrier against waris being slowly built up at GeneVa: -

But arbitration and security are, of course, not the only preoccupations here. The Hungarian machine-gun affair has been treated in England as the trifle it essentially is. - But quite a different view is taken of the business on the Cdn- tinent. The Little Entente Powers are all on the qui viva. Germany is in a delicate position when a question of League investigation into the armaments of one of the defeated nations is raised. Italy is a little embarrassed that the impugned weapons should have come from Verona. And Hungary has done precisely the wrong thing in first pro- testing against the idea of an investigation, secondly, putting the machine-guns involved up for sale, and thirdly, expressing open resentment at the mild suggestion tendered by the President of the League Council that to destroy the incrimin- ating evidence in advance would not create a particularly happy impression. Some sort of investigation will presumably be ordered, but it can-lead to no satisfactory results. Much the same could be said of almost any conceivable investiga- tion in any other ex-enemy State.

For the rest, the main topic of interest here—and it is more important than any I have mentionedis last week's Note from Mr. Kellogg to M. Briand on the renunciation of war as an instrument of national policy. It concerns Geneva directly, because the question to be decided is whether acceptance of the proposal would conflict in any way with Covenant obligations. That is a matter of definition, but on the face of it there is no reason, why it should. And it con- cerns Geneva at this moment particularly because most of the men who need most to discuss the matter with one another find themselves very fortunately here at one time in one place. They have a great opportunity in their hands. '