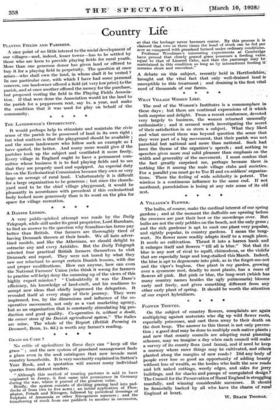 No critic of agriculture in these days can " keep off the grass " ; and the new system of grassland management finds a place even in the seed catalogues that now invade most country households. It is very succinctly explained in Sutton's Year Book, and a quotation will answer many individual queries from distant readers.

" Although this method of treating pastures is said to have originated m Jersey, it first came into prominence in Germany during the war, where it proved of the greatest value.

Briefly, the system consists of dividing grazing land into pad- docks of from two to five acres ; an initial application of Phos- phates, Potash and Nitrogen, followed by periodical dressings of Sulphate of Ammonia or other Nitrogenous manures ; and the transferring of stock from one paddock to another in succession, so that the herbage • never becomes coarse. By this process it is claimed that two or three times the head of stock can be fed per acre as compared with grassland farmed under ordinary conditions; Professor Woodman's interesting experiments at Cambridge have proved that closely grazed grass possesses a feeding, value. equal to that of Linseed Cake, and that the pastbrage may be maintained in this condition so long as by intermittent feeding it' remains short and succulent."

A debate on this subject, recently held in Hertfordshire,' brought out the vital fact that only well-drained land is susceptible to this treatment ; and draining is the first vital need of thousands of our farms.