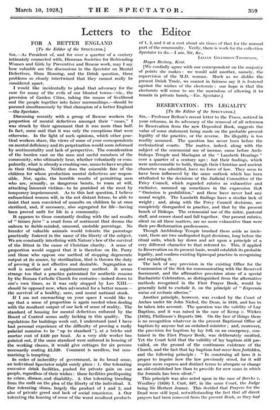 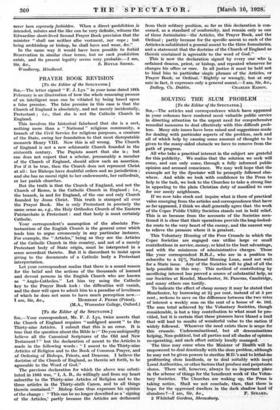 RESERVATION : ITS LEGALITY [To the Editor of the SPECTATOR.]

SIR,—Professor Relton's recent letter to the Times, noticed in your columns, in its advocacy of the removal of all reference to Reservation from the new Deposited Book, suggests the value of some statement being made on the probable present legality of the practice, or the reverse. Its illegality is too readily assumed. The question has never been before the ecclesiastical courts. The matter, indeed, along with the subject of the ceremonial use of incense, came before Arch= bishops Temple and Maclagan at the " Lambeth Hearings " over a quarter of a century ago ; but their findings, which were unfavourable to both, though their Christian and ancient character was admitted, have no force of law. They seem to have been influenced by the same outlook which has 'been attributed to the decisions of the Judicial Committee of the Privy Council, which regarded rubrics as exhaustive and exclusive, summed up sometimes in the expression tin+ " Omission is prohibition," and these have never had any moral weight. The Lambeth findings have a similar lack of weight ; and, along with the Privy Council decisions, are completely disregarded in practice, and that by the present bench of Bishops. The ceremonial use of the mitre, pastoral staff, and censer stand and fall together. Our present rubrics, silent on all these matters, are no more exhaustive than were their pre-Reformation predecessors.

Though Archbishop Temple brushed them aside as irrele- vant, there are two undisputed legal decisions, long before the ritual suits, which lay down and act upon a principle of a very different character to that referred to. This, if applied to Reservation on its present basis, would establish its probable legality, and confirm existing Episcopal practice in recognizing and regulating it.

The lack of any provision in the existing Office for the Communion of the Sick for communicating with the Reserved Sacrament, and the affirmative provision alone of a special Eucharistic Celebration, as distinguished from the alternative methods recognized in the First Prayer Book, would be generally held to exclude it, on the principle of " Expressio unius est erclusio alterius."

Another principle, however, was evoked by the Court of Arches under Sir John Nichol, the Dean, in 1810, and has to be taken into account. The question was the validity of Lay Baptism, and it was raised in the case of Kemp v. Wickes (1810), Phillimore's Reports '286. On the face of things there is no recognition whatever in the present Baptismal Office of baptism by anyone but an ordained minister ; and, moreover, the provision for baptism by lay folk on an emergency, con- tained in the First Prayer Book, was deliberately omitted. Yet the Court held that the validity of lay baptism still pre- vailed, on the ground of the continuous existence of the Church, and the fact that lay baptism had never been forbidden, and the following principle : " In construing all laws it is proper to inquire how the law previously stood, for it will require more express and distinct terms to abrogate or change an old-established law than to provide for new cases in which the formula has been silent."

This principle was also acted upon in the case of Breeks v.

Woolfrey (1838) I. Curt. 887, in the same Court, the Judge being Sir Herbert Jennei. This decided that Prayers for the Dead were still legal, notwithstanding the fact that all direct prayers had been removed from the present Book, as they hdd never been expressly forbidden. When a direct ..prohibition intended, rubrics and the like can be very definite, witness the Edwardine short-lived Second Prayer Book provision that the minister " shall use neither albe vestment, nor cope ; but being archbishop or bishop, he shall have and wear, &c."

In the same way it would have been possible to forbid Reservation in similar clear terms, but no such prohibition exists, and its present legality seems very, probable.—I am,