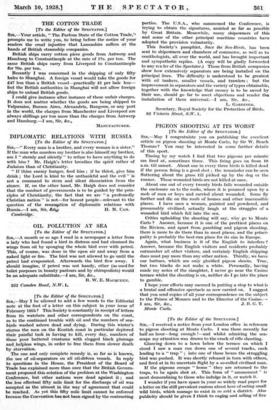 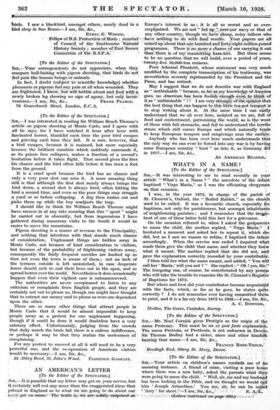 [To the Editor of the SencrAron.]

SLE,—I received a notice from your London office in reference to, pigeon shooting at Monte Carlo. I was there recently for half an hour—long enough !—and whilst admiring the sea- scape my attention was drawn to the crack of rifle shooting.

Glancing down to a lawn below the terrace on which I stood I saw a man run down one of several tracks, each leading to a " trap " ; into one of these boxes the struggling bird was pushed. It was shortly released in turn with others, and fired at in its uncertain flight by a so-called civilized man.

If the pigeons escape " home " they are returned to the traps, to be again shot at. This form 'of " amusement " is most demoralizing to those who indulge in it, or watch it.

I wonder if you have space in your so widely read paper for a letter on the still prevalent custom about here of eating small wild birds, which manage to exist in so arid a district. Also publicity should be given I think to caging and selling of-live birds. I saw a blackbird, amongst others, nearly dead in a bird shop in San Remo.—I am, Sir, &c., ETHEL -G. WOODD, Fenn* of R. Protection of Birds ; membef

of A Council of the Eastbourne Natural Histery Society ; _member of East Sussex Coniiniti6e of the -R.S4..A: