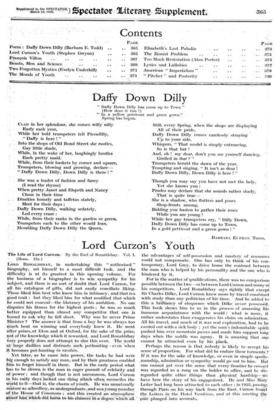 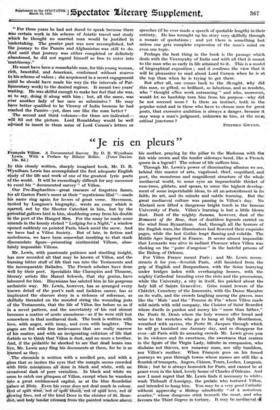 tom). RortALpsv, in undertaking this " authorised " biography, set himself to a most difficult task, and the difficulty is at its greatest in this opening volume. For the business of a biographer is to win: sympathy for his subject, and there is no sort of doubt that LOrd Curzon, for all- his catalogue of gifts, did not easily conciliate liking: Those liked him best who knew him in intimacy, and that isa gOOd trait : but they-liked him for what modified that which he could not conceal—the blatancy of his ambition. No one iliSputes his fitness for the highest Posts ; he was so much better equipped than almost any competitor that one is bound to ask why he fell short. Why was he never Prime Minister ? The answer is that from a boy he was always too Mitch bent on winning and everybody knew it. He.. went after prizes, at Eton and at Oxford, for the sake of the prize, not of the knowledge which it rewarded, and Lord Ronaldshay very properly does not attempt to slur this over. The world at large dislikes and distrusts such pothuiiting--even when it becomes pot-hunting in excelsis.

Yet later; as he came into power; the tasks: he had were big enough to satisfy any man, and by their greatness enabled fiiria to forget himself in them. But in the early period what has to be shown is the man in eager pursuit of celebrity and of-power ; and though that is not uncommon, Lord Curzon in his early days71.1aOked one thing which often reconciles the world to it—that is, the charm of youth. He was unnaturally Mature as schoolboy; as undergraduate, and asa young Menther otthe House of Commons ; and this created an atmosphere - tibtoiirldii:#11ch-did Ileitis to his thificia74a-degreeIihieh the advantages of self-possession and mastery of resources could not compensate. One. has only to think of his con- temporary, Lord Grey, to drive home the contrast between the man who is helped by his personality and the one who is hindered by it.

For in the matter.of qualifications, there was no comparisoh possible between the two—or between Lord Curzon and many of his competitors. Lord Ronaldshay says rightly that except Sir Charles Dilke, Lord Curzon knew more by travel combined with study than any politician of his time. And he added to this a brilliancy of eloquence which bilke never possessed. This book shows, him to us in the process of amassing his immense acquaintance with the world : what is more, it rather understates than exaggerates his claim on admiration. All his travel, and much of it was real exploration, had to be carried out with a sick body ; yet the man's indomitable spirit pushed him over mountain passes and made him support long days when the- saddle was agony. It is amazing that One cannot be attracted even by his pluck. . • Perhaps the reason is that nobody is likely to accept his sense of proportion. For what did he endure these torments If it was for. the sake of knowledge, or even in simple spats- , manship, admiration or sympathy would go out to him. It one cannot get over the sense that every frontier he crossed was regarded as a rung on the ladder to office, and he dis- regarded quite other things than , physical, hardship—yie have here the story of his engagement. He and Miss Mary Leiter had long been attracted to each other ; in 1923, pass* . through paris on his -way hook frorn'the East, Curzon fot9d the Leiters in the Hotel Vendome, and at this meeting the

4)nie.plunged- into avoWals;, - - "For three years he had not dared to speak because there Wits certain work in his scheme of Asiatic travel and study 4 - sv hhic he thought no married man would be justified in undertaking. The greater part was now accomplished, but the journey to the Pamirs and Afghanistan was still to do. And until that journey was either completed or definitely abandoned, he did not regard himself as free to enter into 'matrimony."

Ifle must have been a remarkable min, for this young woman, rich, beautiful, and American; cerifoimed without reserve to his scheme Of values ; she acquiesced in a secret engagement until he should haVe made his way (in the intervals of Par- liamentary work) to the desired regions. It meant two years' waiting. He was skilful enough to make her feel that she was, :44 to say, doing if along with him ; but, all the same, was pier another lady of her race so submissive ? He may hive better qualified to be Viceroy of India because he had reached the Pamirs—yet, does one like the man better ?

The second and third volumes—for three are indicated— Will fill out the picture. Lord Ronaldshay would be well advised to insert in them some of Lord Curzon's letters or speeches (if he ever made a speech of quotable length) in their. entirety. He has wrought up his story very skillfully, through a mosaic of quotations ; and yet there is something lost unless one gets complete expression of the man's mind on even one topic. .

Perhaps the best thing in the book is the passage which deals with the Viceroyalty of India and with all that it meant to the man who so early in life attained to it. This is a model of biographical exposition and it confirms the view that it will be pleasanter to read abOut Lord Curzon when he is at the top than when he is trying to get there.

But after all, one comes back to the thought, why did . this man, so gifted, so brilliant, so laborious, and so resolute, who " thought office work entrancing " and who; moreover, woirld- let no hardship turn him from his purpose—why did he not succeed more ? Is there an instinct, both in the popular mind and in those who have to choose men for great posts, that excessive ambition is always a danger, because it may warp a man's judgment, unknown to him, at the mcst, critical junctures ?