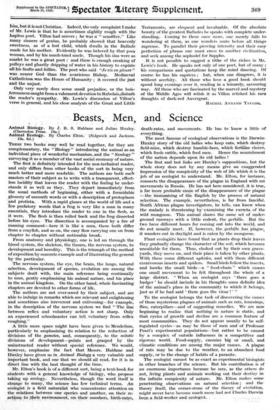 Animal Biology. By J. B. S. Haldane and Julian Huxley. (Clarendon Press. 10s.) TricsE two books' may well be' read together, for they are complementary, the "Biology" introducing the animal as an individual piece of wonderful mechanism, and the "Ecology"

surveying it as a member-of the vast social economy of nature. The first is definitely intended for the non-technical reader, and only -differs from other books of the -sort in being very

much better and more readable: The authors are both such masters of their subject as to write with a transparent, effort- less lucidity that leaves the reader with the feeling he under- stands it as well as they. They depart immediately from the usual methods of beginning, either with a formidable glossary of uncouth words or with a description of protoplasm and protista. With a rapid glance at the world of life and. a 'few prefatory words that a frog is very like a man in many essentials, they introduce the reader to one in the flesh, as it were. The flesh is then- rolled' back and the frog dissected before his-eyes: The dissection is accompanied by- a fire of running comment4--here it ' is like a man, there -both differ from a crayfish, and so on, the easy flow carrying one on from chapter to chapter without noticeable break. . _ From anatomy and physiology, one- is led on through the blood system, the skeleton, the tissues, the nervous system, to developnient and heredity. This is the triumph of the method of exposition by concrete example and of illustrating the general by the particular.

The nervous system, the eye, the brain, the lungs, natural selection, deVelopment of species, evolution •are among the

subjects dealt with, the main reference being continually to man, gently emphasizing his animal nature, and his place in the animal kingdom. On the other handrwhole fascinating chapters are devoted to other forms of life.

The authors are not over-awed by their subject, and are able to indulge in remarks which are relevant and enlightening and sometimes also irreverent and enlivening—for example, in the description of the nervous system we find " The line between reflex and voluntary action is not sharp. Only an experienced schoolmaster can tell voluntary from- reflex coughing."

A little more space might have been- given to Mendelism, particularly to emphasizing its relation to the reduction of

divisions of the gametes, and, consequently, to the mitotic divisions of development points not grasped by the uninstructed reader without special reference. We would, however, emphasize the fact that Messrs. Haldane and Huxley have given us in Animal Biology a very valuable and important book, and one that we should all read, for it is in direct line with the best thought of the time.

Mr. Elton's book -is of .a different sort, being a text-book-for students with a general knowledge of biology, who propose

taking up ecology. Nevertheless, though the word itself is strange to many, the science has few technical terms. An ecologist is a field naturalist who concentrates attention on the relations between one- species and another, on their re- actions to their environment, on-their numbers, birth-rates, death-rates, and movements. He has to -know a little of everything. _ _

The most famous of ecological observations is the Darwin- Huxley story otthe old ladies who keep cats, which destroy field-mice, which destroy bumble-bees, which fertilize clover, which feeds cattle, which feed men. Hence the nourishment of the nation depends upon its old _ladies !

- The first and last links are Huxley's suppositions, but the whole story does not by any means give an exaggerated impression of the complexity of the web of life which it is the job of an ecologist to understand. Mr. Elton, for instance, connects the disappearance of the plague in England with rat movements in Russia. He has not here considered, it is true, a far More probable cause of the disappearance of the plague

the immunizing of the English by the process of natural selection. The example, nevertheless, is far from fanciful. Sbirtb African- plague investigators, he tells, can know when the malady is, threatening by examining the excreta of the wild mongoose. This animal shares the same set of under- ground ground runways with a little rodent, the gerbille. But the two have different hours for coming out into the world, and

do .not usually _meet..- H, hOWever.,_ gerbille has piague, it wanders out in daylight and is eaten by the mongoose.

Plant ecologiiti haVe found that as plants drop their -.leaves they gradually change the character of the soil, which beeomes unsuitable for them. Thus, choked out by their own grave- yards, they move on, and their place is taken by other plants. With these come different aphides, and with them different carnivorous insects and spiders. Small birds follow the insects, and hawks the small birds—a " food-chain " which causes one small movement to be felt throughout the whole of a large district. " When an ecologist says ' there goes a badger ' he should include in his thoughts some definite idea of thc animal's place in the community to which it belongs, just as if he had said ' there goes the vicar ! "'

To the ecologist belongs the task of discovering the causes of those mysterious plagues of animals such as rats, lemmings, flies, caterpillars—and of suggesting remedies. We are now beginning to realize that nothing in nature is static, and that cycles_ of growth and decline are a common feature of most communities. They do not appear -usually to be self- regulated cycles—as may be those of men and of Professor Pearl's experimental populations—but rather to be caused by a complex of outside influences in a competitive and rigorous world. Food-supply, enemies big or small, and climatic conditions are among the major causes. A plague of rats may be due to the weather, to an abundant -food supply, or to the change of habits of a parasite.

The ecologist cannot be as exact as experimental biologists in other branches of the science. But his contribution is of

an- enormous importance because -he sees, as the others do not, living plants and animals working out their destiny in

the infinite complexity of nature. Mr. Elton makes some -penetrating observations on natural selection ; and the theory itself, the corner-stone of the theory of evolution, might never have become much more had not Charles Darwin _beep. a field-worker and ecologist.