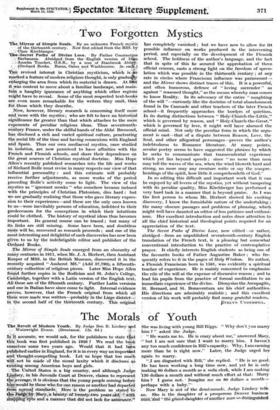 The. Mirror of Simple Souls. By an unknown French myitie of the thirteenth century. Now first edited from the MSS. by - Clare Kirchberger;

iiM•a revived interest in Christian inysticism, which is marked a feature of modern religious thought, is only grad

enlarging the area from which its material is drawn. At it was content to move about a familiar landscape, and main7 t arn a haughty ignorance of anything which other regions might have to reveal. Some of the most respected text-books are even more remarkable for the writers they omit, thin for, those which they describe.

Now, however, literary research is concerning itself more more • more with the mystics ; who are felt to have an historical

significance far greater than that which attaches to the mere exponents of peculiar religious ideas. Thus seventeenth- century France, under the skilful hands of the Abbe Bremond, has disclosed a rich and varied spiritual culture, penetrating the social life of the time and having connexions with England and Spain. Thus our own mediaeval mystics, once studied in.- isolation, are now perceived to have affinities with the French and Flemish schools, and share their dependence op the great sources 'of Christian mystical doctrine. Miss Hope Allen's recently published researches into the life and works of Richard Rolle must revise in many respects our view of that influential personality : and this estimate will probably receive further adjustments, as more works of the period preceding Rolle's activity come to light. The view of the Mystics as "ignorant monks " who somehow became imbued with the principles of Christian Platonism, dies hard : but we are gradually realizing that those who gave literary expres- sion to their experiences—and these are the only ones known to us—were inevitably persons of education, indebted to their predecessors for the conceptions in which their intuitions could be clothed. The history of mystical ideas thus becomes important. Its general course can be traced ; but many of its links are still missing. Some have been, and doubtleas more will be, recovered as research proceeds ; and one of the most interesting and delightful of such discoveries has now been given to us by the indefatigable editor and publisher of the Orchard Books. -The Mirror of Simple Souls emerged from an obscurity .of many centuries in 1911, when Mr. J. A. Herbert, then Assistant Keeper of MSS. in the British Museum, discovered it in the recently acquired " Amherst MS." (Add 37,790), a fifteenth: century collection of religious pieces. Later Miss Hope Alien found further copies in the Bodleian and St. John's College, CiuMbridge, together with a Latin version of the English text, Allihese are of the fifteenth century. Further Latin versions and one in Italian have since come to light. Internal evidence proves, however, that the French original from which all these were made was written—probably in the Liege distriet-- in the second half of the thirteenth century. This original has completely vanished ; but we have now to allow for ita possible influence on works produced in the intervening period, and especially on the development of the Flemish school. The boldness of the author's language, and the fact that in spite of this he secured the approbation of three official censors, casts a -strong light on the freedom of specu- lation which was possible in the thirteenth pentnry ; at any rate in circles where Franciscan influence was paramount— and the Mirror shows distinct traces of this. It is a powerful, and often humorous, defence of " loving surrender " as against " reasoned thought," as the means whereby man comes to know Reality. In its advocacy of the entire " naughting of the will "—curiously like the doctrine of total abandonment found in De Caussade and other teachers of the later French school—it frequently approaches the borders of quietism. In its daring distinctions between " Holy-ChMreh-the-Little," which is governed by reason, and " Holy-Church-the-Great," which is governed by love, it might well haye alarmed the official mind. Not only the peculiar form in which the argu- ment is cast—that of a dispute between Reason, Love, the Soul, and other allegorical personages—proves the author's indebtedness to Romance literature. At many points, secular poetry seems to have suggested the phidies by which he seeks to communicate that transcendental experience which yet lies beyond speech ; since " no more than men may tell the waves of the sea, when the wind bloweth hard and strong, no more may any creature write or. say the compre- hendings of the spirit, how little it comprehendeth of God."

In so editing this difficult and important work that it can be enjoyed by all lovers of the mystics, yet without tampering with its peculiar_ quality, Miss Kirehberger has performed a very hard task in a manner that is beyond praise. As I was the first person to whom Mr. Herbert showed his exciting discovery, I know the formidable nature of the undertalcing ; the many obscure passages and problems of phrasing, which might well have daunted an editor of less patience and enthusi- asm. Her excellent introduction and notes draw attention to all the chief historical and theological points required for an appreciation of the text.

The Secret Paths of Divine Love, now edited—or rather, abridged—from an unpublished seventeenth-century English translation of the French text, is a pleasing but somewhat Conventional introduction to the practice of enntemplative prayer. It chiefly interests English students as being one of the favourite books of Father Augustine Baker ; who fre- quently refers to it in the pages of Holy Wisdom. Its author, a Flemish Franciscan born in 1581, was evidently a spiritual teacher of experience. He is mainly concerned to emphasize the role of the will at the expense of discursive reason ; and ta lead his pupils from the practice of formal meditation to an immediate experience of the divine. Dionysius the Areopagite, St. Bernard, and St. Bonaventura are his chief authorities. His directions are admirably realistic ; and this excellent version of his work will probably find many grateful readers;