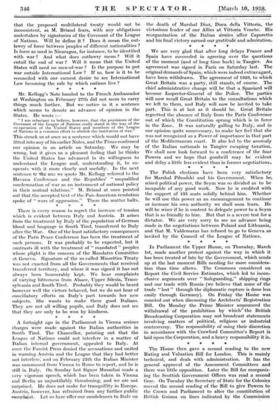 The House then gave a second reading to the new

Rating and Valuation Bill for London. This is mainly technical, and deals with administration. It has the general approval of the Assessment Committees and there was little opposition.. Later the Bill for, reorganiz- ing the Scottish Government Offices was read a second time. On Tuesday the Secretary of State for the Colonies moved the second reading_ of, the Bill to give Powers, to the Crown. and Parliament to alter the constitution of British Guiana on lines indicated by the Commission which recently visited the tolOny. At present the financial deadlock is' hopeless, since finance and legislation are, divorced, being each in the hands' of a body prectuded from dealing with the other. * * *