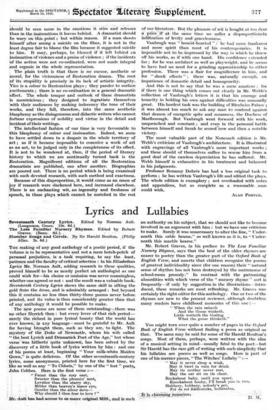 The Less Familiar Nursery Rhymes. Edited by Robert Slumber Songs and Carols. ,By Sir Harold Boulton. (Philip Allan. 2s. 6d.) THE making of any good anthology of a poetie period, if the volume is to be representative and not a mere hotch-potch of personal prejudices, is a -task requiring,. to say the least, -patience and the faculty-of-critical selection : in his Elizabethan Lyrics Mr. Norman Ault, adding research to these qualities, proved himself to be as -nearly perfect ail anthologist as one could wish for—his choice or emission was never meaningless, whether one agreed or not : and the result was a valuable book. Seventeenth Century Lyrics shows the same skill in sifting the gold' from the dross, and is adniirablY arranged : but beyond this if contains no less than thirty-three poems never before .printed, and its value is thus considerably greater than that of any anthology it would be possible to make.

The new poems are none of them outstandingthere was no other Herrick then : but every lover of that rich period-- surely the richest in pure lyrical beauty that the world has ever known, iv e.ny language—must be grateful to Mr. Ault for having brought them, such as they are,' to light. The mystery of the Duke -of Newcastle, whom his wife called " the best Lyrick and 'Dramatick Poet of the Age," but whose verse washitherto quite 'unknown-, has been solved by the discovery of a little book of lyrics written by him : and one of his poems at least, beginning " Your milk-white Maiden Gown," is quite delicious.. Of the other seventeenth-century lyrics, some anonymous, printed here for the first time, we like as well as any " To Chloris," by one of the " lost " poets, John Cobbes. Here is the -first verse :— .

" Fairer than the rosy east, Sweeter than the phoenix' nest, Lovelier than the starry sky, Milder than heaven's lesser eye, Gentler than the silver dove— Why should I than fear to love ?"

Mr. Ault has had- access to so many original MSS., and is such

an authority on his subject, that we should not like to become involved in an argument with him : but we have one criticism to make. Surely it was unnecessary to alter the line, " Under- neath this sable hearse," so well known as it is, to " Under- neath this marble hearse."

Mr. Robert Graves, in his preface to The Less Familiar Nursery Rhymes, says that the best of the older rhymes are nearer to poetry than the greater part of the Oxford Book of English Verse, and asserts that children recognize the poems of greatest individuality since (for one reason) their " natural sense of rhythm has not been destroyed by the metronome of school-room prosody." In contrast with the patronizing absurdities with which verse of the " nursery rhyme " sort is frequently—if only by suggestion in the illustrations—intro- duced, these remarks are most refreshing. Mr. Graves was certainly the right editor for this anthology. One or two of the rhymes are new to the present reviewer, although doubtless many readers have childhood memories of this one :- "When the rain raineth And the Goose winketh, Little wotteth the Gosling

What the goose thinketh."

You might turn over quite a number of pages in the Oxford Book of English Verse without finding a poem as original as that. The same may be said for some of Sir Harold'Boulton's songs. Most of them, perhaps, were written with the idea of a musical setting in mind—usually fatal to the poet—but Sir Harold has the rare gift of writing with such simplicity that his lullabies are poems as well as songs. Here is part of one of his merrier pieces, "The Witches' Lullaby" :-

" May it never sleep a wink, May it bawl in vain for drink, May its mother never rest, May the cat sit on its chest.

Rockabout baby, until you upset, Knockabout booby,. Fit break you in two.