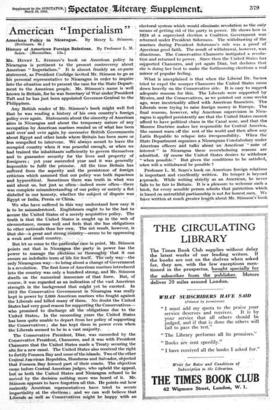 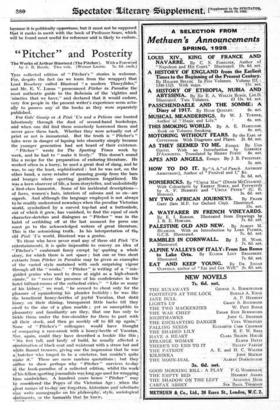 Mn. HENRY. L. STiliSON'S book on American. policy in Nicaragua is pertinent to the present, controversy about -4 American " Impeiialism." It is almost frankly an ex party statement, as President Coolidge. invited Mr. Stinson to go as ; his personal representative to Nicaragua in order to inquire into the situation and to present the ease for the State Depart- ment to the American people. Mr. Stimson's name is well known in Britain, for he was Seetetarfof War Under President Taft and he has just been appointed- Governor-Geniral to the Philippines. _- Any British reader of Mr. Stimson's book might well feel that he was reading a history of his own country's foreign policy over again. Statements about the sincerity of American aims in Nicaragua and about the temporary nature of any occupation by American marines remind us of what has been said over and over again._ by successive BritiskGevernments about .Egypt and other lands where,Britain has been. more or less compelled to intervene. We always meant to leave the occupied country when it was peaceful enough, or when we had trained the inhabitants"Sufficiently to -govern themselves ; and to guarantee security for the lives and property of foreigners ; yet year succeeded year and it was generally impossible to fulfil the premise. All the tune Britain. has suffered from the asperity and the persistence of foreign criticism which assumed that our policy was both rapacious and hypocritical. Sometimes there was truth in what was said about us, but just as often—indeed more. often=there was complete misunderstanding of our policy or merely a flat disbelief in our honesty, whether the subject of dispute was

We who have suffered in this way understand how easy it is to be misunderstood. Englishmen ought to be the last to accuse the United States of a merely acquisitive policy. The truth is that the United States is caught up in the web of circumstance, means welj,and feels that she has obligations to other nationals than her own. The net result, however, is that she-2a great and strong*Mtry—seems to be oppressing a weak and small country.

But let us come to the pa.iticUlarTease in point. Mr. Stimson points out that in Nicaragua -the • party in power has the power to manage the 6166051LS:in- thoroughly that it can ensure an indefinite term of life for itself:. The'only way—the - only Nicaraguan way—to bring about a change of Government is a revolution. The first force of American marines introduced into the country was only a hundred strong, and Mr. Stimson dwells on the numerical innocence of that force. But, of course, it was regarded as an indication of the vast American strength in the background that might yet be exerted. In 1912 the Conservative Government in Nicaragua was really kept in power by 2,000 American marines who fought against the Liberals and killed many of them. No doubt the United States had very good reason for supporting the Conservatives-- who promised to discharge all the - obligations due to the United States.; In the succeeding years the. United States has been quite unable to depart from her policy of supporting the Conservatives ; she has kept them in power even when the Liberals seemed to be in a vast majority. .

The Conservative President, -Diaz, was succeeded by the Conservative President, Chamorro, and it was with President Chamorro that the United States made a Treaty securing the site for a new canal. The United States also received the right to fortify Fonseca Bay and some of the islands. Two of the other Central American Republics, Honduras and Salvador, objected that Fonseca Bay formed part of their coasts. The objection came before Central American judges, who upheld the appeal, but as both the United States and Nicaragua refused to be moved by the decision nothing more was heard of it. Mr. Stiinson appears to have forgotten-all this. He points out how earnestly American representatives have tried to secure impartiality at the elections ; and we can well believe that Liberals as well as- Conservatives might be happy with an electoral system -which -would eliminate -revolution as -the only means of getting rid of the party in power. He shows how in 1924 at a superyised election a Coalition Government was returned under President Solorzano. The WithdraNVing of the marines during President Solorzano's rule was a proof of AineriCan good faith. The result of withdrawal, however, was, disastrous. The Conservative.-Charaarro instigated a revolu- tion and returned to power. Since then the United States has supported Chamorro, and yet again Diaz, but declares that she is doing her best to make the forthcoming elections a real mirror of .popular feeling.

What is 'unexplained is that when the 'Liberal Dr. Sa6asa tried to expel the usurper Chamorro the United States came dOwn heavily on the Conservative side. It is easy to suggest adequate reasons for this. The Liberals were supported by Mexico, and the Conservatives, as we pointed out some weeks. ago, were inextricably allied with American 'financiers: The Liberals were trying to raise foreign money in Europe. The final reasons, however, why American supervision in Nica- ragua is applied persistently are that the United States cannot afford to have political chaos in the Canal zone, and that the Monroe Doctrine makes her responsible for Central Airierica, She cannot warn off the rest of the World and then allow any Latin Republic to relapse into irresponsibility: When the State Department organizes a Nicaraguan Constabulary under Ainerican officers and talks about an American " zone of interest " in Nicaragua these overwhelming reasons are admitted. Of course the United States desires to withdraw.: " when possible." But given the conditions to be satisfied,: when will a withdrawal be possible ?

'Professor L. M. Sears's. book on American foreign relations is-important and excellently written. Its temper is beyond reproach. While writing 'stria* as an Ainerican, he never fails to be fair to Britain. -Itis 'a pleasure to Weicoine such a book, for every sensible person admits that patriotism -which. is based. on untruthful partisanship is.not for honest men. We hive written at much greater length about Mr. Stimson's book

becanseitis-politieally oppertune,-but it must not be supposed that it ranks in merit with the book of PrOfessor SearS, which Will be found most useful for reference afi'd is likely to endure..