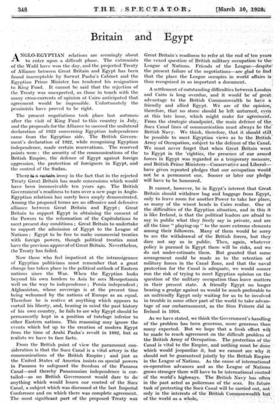 A Nom-EGYPTIAN relations are seemingly about to enter upon a difficult phase. The extremists. of, the, Wafd have won the day, and the projected Treaty of Alliance between Great Britain and Egypt has been, found inaceeptable by Sarwat. Pasha'S Cabinet and the Egyptian Prime Minister. has tendered his resignation to King Fuad. It cannot be said that the rejection of the Treaty was unexpected, as .those in touch with the many cross-curreats•,of opinion at Cairo anticipated that: agreement -would be impossible. Unfortunately. the_ have have proved to be right. • • The present negotiations took place last autiiimi: after the visit Of King :Fintd. to this country in July,- and the proposals for:the Alliance 'to succeed the unilateral declaration of 1922 concerning Egyptian independence came from the Egyptian side. The British 'Govern- : ment's declaration of 1922,- while recognizing Egyptian independence, made certain reservations. The reserved points were : the security of- the communications of the British Empire, the defence of 'Egypt against foreign" aggression; the protection of- foreigners in Egypt, and - the control of the Sudan: - There ie irony in the fact that in the rejected Treaty Great Britain has made concessions which would' have been inconceivable ten years ago. The British.' Goveriurient'a readinesa to turn over a new page in Anglo- EgYptian relations haS surely been amply demonstrated.. AmOng the proposed terms are an offensive and defensive alliance between Great Britain and Egypt ; Great' Britain to support Egypt in obtaining the consent of the' Powers to the reformation Of the Capitulationd to meet present day conditions ; Great Britain to undertake to support the admission of Egypt to the League of Nations ; Egypt to- be free to' make commercial treaties with foreign powers, though political treaties must have the previous approval of Great Britain. Nevertheless, the Treaty has failed.

Now those who feel impatient at the intransigeance of Egyptian politicians must remember that a great change has taken place in the political outlook of Eastern nations since the War. When the Egyptian looks beyond his own borders to Asia he sees Mesopotamia well on the way to independence ; Persia independent ; Afghanistan, whose sovereign is at the present time being welcomed by the nations of Europe as an equal. Therefore he is restive at anything which appears to curtail his liberty, and, bearing in mind the past history of his own country, he fails to see why Egypt should be permanently kept in a position of tutelage inferior to Other Eastern nations. This reasoning may ignore the• events which led up to the creation of modern Egypt from the time of Arabi Pasha's revolt in 1882, but as realists we have to face facts.

From the British point of view the paramount con- Sideration is that the Suez Canal is "a vital artery in the communications of the British Empire ; and just as the United States of America insists on special powers in Panama to safeguard the freedom of the Panama Canal—and thereby Panamanian independence is cur- tailed—so no British Government would dare to do' anything which would lessen our control of the Suez - Canal, a subject which was discussed at the last ImPerial Conference and on which there was complete agreemeht. The most significant part of the proposed- Treaty was Great. Britain's readiness, to refer at the end of;ten years- the vexed question of British military occupation to tlie, League of Nations. Friends of the LeaguedesPitel the present failure of the negotiations—are glad to find that the place the League occupies in world affairs is' thus recognized in so important a document. _ .

A settleinent of outstanding difficulties between London and Cairo is long. overdue, and it would be of great, advantage to the British Commonwealth to haVe friendly and allied Egypt. We are of the opinion; therefore, that no stone should be left unturned, even at this late hour, which might make for agreement.. From the strategic standpoint; the main defehee of the Suez Canal lines of communication must always be the British Navy: We think, therefore, that it-should still be possible to meet Egyptian views as to the British Army of Occupation, subject to thedefence of the Canal. . , We must never forget that when Great Britain went to Egypt in the 'eighties, the presence of our armed. forces in Egypt was regarded.,as a temporary measure; and BritiSh Prime Ministers—Conservative and Liberal- haie given repeated pledges that our occupation would not be a permanent one Sooner or later our pledge will 'have to be honoured. , It cannot, however, be in Egypt's interest that Great Britain should withdraw bag and baggage from Egypt, - only to leave room for another Power to take her place; as many of the wisest heads in Cairo realize. One of the difficulties of the Egyptian situation, and in this it is like Ireland, is that the political leaders are afraid to say in public what they freely say in private, and are all the time `.! playing-up to the more extreme elements among their followers. Many of them would be sorry to see .the withdrawal of the British forces, but they dare not- say so in public. Then, again, whatever policy is pursued in Egypt there will be risks, and we - do not under-estimate them. But granted that some arrangement could be made as to the retention of military forces in the Canal Zone, and that the naval' protection for the Canal is adequate, we would sooner run the risk of trying to meet Egyptian opinion on the question of the military occupation than leave matters in their present state. A friendly Egypt no longer bearing a grudge against us would -be much preferable to an unfriendly Egypt only waiting for us to be involved in trouble in some other part of the world to take advan- tage of our embarrassment, as the Sinn Feiners did in Ireland in 1916.

As we have stated, we think the Government's handling of the' problem has been generous, more generous than' many eXpected. But we hope that a fresh effort will be made to reach agreement on the difficult problem of the British Army of Occupation. The protection of the Canal is vital to the Empire, and nothing must be done - which 'would jeopardize it, but we cannot see- why it should not be guaranteed jointly by the •BritiSh EMpire in the League of Nations. As the cause of international co-operation advances and as_ the League of Nations grows Stronger there will have to be international- control Of the world's highways. The British NaVy hai often in the past acted as policeman of the seas: Its fUtuie task of protecting the Snei Canal will be carried out, not only in the interests of :the British -Comnionwealth ⁢ • • of world as a Whole,