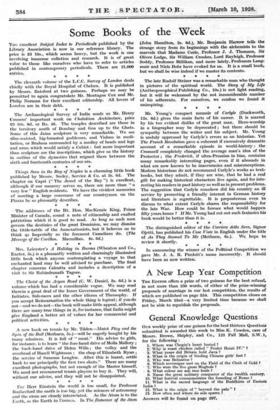 Ova weekly prize of one guinea for the best thirteen Questions submitted is awarded this week to Miss K. Cowden, care of Messrs. Brown, Shipley, 'and Co., 123 Pall Mall, S.W. 1, for the following : -

I. Where was Chopin's heart buried ?

3. What years did Britain hold Java ?

4. What is the origin of binding Chinese girls' feet 5. Who was Belisarius ?

6. Which sovereigns met on the Field of the Cloth of Gold ?

9. Name the great military conqueror of the twelfth century. 10. What festival commemorates the founding of Rome ? 11. What is the sacred language of the Buddhists of Eastern India ?

Answers will be found on page 897.