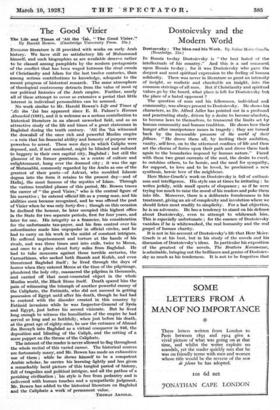 By Harold Bowen. (Cambridge University Press. 25s.) ENGLISH literature is ill provided with :works on early- Arab history.- We have still no satisfactory life of Muhammad himself, and such biographies as are available deserve rather to be classed -amrong pamphlets by the modem protagonists

of the conflict that has been waged between the rival creeds of Christianity and Islam for the last twelve centuries, than among serious contributions to knowledge, adequate to the recent progress of historical research. The same atmosphere of theological controversy detracts from the value of most of our political histories of the Arab empire. Further, nearly all of these attempt to cover so extensive a period that little interest in individual personalities can be aroused.

No work similar to Mr. Harold Bowen's Life and Times of ibn 'Isa has appeared since E. H. Palmer's Haroun Alraschid (1881), and it is welcome as a serious contribution to historical literature in an almost unworked field, and as an attractive study of the life and times of a great statesman in Baghdad during the tenth century. 'Ali ibn 'Isit witnessed the downfall of the once rich and powerful Muslim empire —a ruin that his financial ability and honesty of purpose were powerless to arrest. These were days in which Caliphs were deposed, and, if not murdered, might be blinded and reduced to beggary in their own capital city, Baghdad ; but still the glamour of its former greatness, as a centre of culture and enlightenment, hung over the doomed city ; it was the age of Mutanabbi, commonly regarded by the Arabs as one of the greatest of their poets—of Ash'ari, who moulded Islamic dogma into the form it retains to the present day—and of Hallaj, the most famous of the mystics of Islam. Through the various troubled phases of this period, Mr. Bowen traces the career of " the good Vizier," who is the central figure of his narrative ; he entered official life as a young man, and his abilities soon became recognized, and he was offered the post of Vizier when he was only forty-five ; though on this occasion he declined the honour, he later occupied this highest office in the State for two separate periods, first for four years, and later for one. His integrity as a financier, his consideration for the unfortunate tax-payer, and his firm control over his subordinates made him unpopular in official circles, and he had to carry on his work in the midst of constant intrigues. He suffered imprisonment and torture at the hands of his rivals, and was three times sent into exile, twice to Mecca, and once to a place about forty miles from Baghdad. He had to take measures against those terrible sectaries, the Carmathians, who sacked both Basrah and Kufah, and even threatened Baghdad itself ; he lived through the days of horror when they entered Mecca at the time of the pilgrimage, plundered the holy city, massacred the pilgrims in thousands, And carried off that most-venerated object in the whole Muslim world, the Black Stone itself. Death spared him the pain of witnessing the triumph of another powerful enemy of the Caliphate, the Fatimids, who did not succeed in getting possession of Egypt until after his death, though he had had to contend with the disorder created in this country by Fatimid invasions while he was Inspector-General of Syria and Egypt, just before his second vizierate. But he lived long enough to witness the humiliation of the empire he had served so long and so faithfully, when just before his death, at the great age of eighty-nine, he saw the entrance of Ahmed ibn Buvayh into Baghdad as a virtual conqueror in 946, the deposition and blinding of the Caliph, and the setting of a mere puppet on the throne of the Caliphate.

The interest of the reader is never allowed to flag throughout

the whole recital of this varied career. The historical sources are fortunately many, and Mr. Bowen has made an exhaustive use of them ; while he allows himself to be a competent Arabic scholar, he carries his learning lightly and has given a remarkably lucid picture of this tangled period of history, full of tragedies and political intrigue, and all the pathos of a perishing civilization ; his style is free from pedantry and is enlivened with human touches and a sympathetic judgment. Mr. Bowen has added to the historical literature on Baghdad and the Caliphate a work of permanent value. - Thomas ARNOLD.