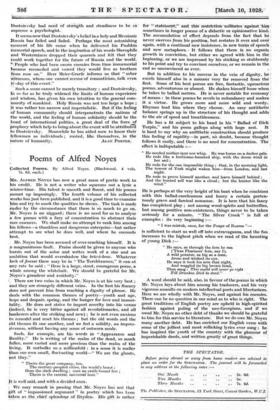 Ma. ALFRED NOYES has now a great mass of poetic work to his credit. He is not a writer who squeezes out a lyric a winter-time. His talent is smooth and fluent, and his poems mount up imposingly. The fourth volume of his collected

:works has just been published, and it is a good time to examine a and try to mark the qualities he shows., The task is made

'easier by the circumstance that there is 'so much to go on. Mr. Noyes is no niggard ; there is no need for us to analyse a few poems with a fury of concentration to abstract their rare essences. We shall make no attempt to rank him among his fellows—a thankless and dangerous enterprise—but rather attempt to see what he does well, and where he succeeds best.

- Mr. Noyes has been accused of over-reaching himself. It is a magnanimous fault. Praise should be given to anyone who bursts out of the salon and writes work of a size and an ambition that would overshadow the bric-a-brae. Whatever lack of finesse there may be in " The Torchbearers," it can at rimy rate be said : "Here is a large, stout, courageous poem, a whale among the whitebait. We should be grateful for Mr.

There are two veins in which Mr. Noyes is at his very best ; and they are strangely different veins. In the first his fluency does not prevent him from reaching a dignity of phrase. He deals with the common themes of poetry—youth and age, hope and despair, spring, and the hunger for love and immor-

tality. He does not strive to import novelty into his verses (indeed, he is very bitter against all revolirtionaries, and all hankerers after the striking and new) ; he is not even anxious to remodel and reset his themes ; but the old words and the old themes fit one another, and we feel a solidity, an impres- siveness, without having any sense of outworn mode.

Such, for example, are his words in "Appearance and Reality." He is writing of the realm of the dead, so much fuller, more varied and more precious than the realm of the living. It outbuiks us a millionfold : in a sense it is realler than our own small, fluctuating world—" We are the ghosts, not they."

The century-peopled cities, the world's boast ; Ours the dark dwelling ; ours an earth-bound few Theirs is the central, universal host."

it is well said, and with a decided aura.

We may remark in passing that Mr. Noyes has not that gift of " impassioned argument " in poetry which has been 4filceR s. the ohief splendour_of-Dryden. His -gift is rather -for " statebrfelit," this testriction militates against • hith sometimes in longer poems of a didactic or opinionative kind. The accumulation of effect depends from the fact that he never swerves from his position, but restates it over and over again, with a continual new insistence, in new turns of speech, and new metaphors.. It follows that there is no, organic growth in conviction, but either we agreed with him in the beginning, or we are impressed by his sticking so stubbornly to his point and try to convince ourselves, or we remain in the end as unconvinced as ever.

But in addition _to his success in the vein of dignity, he excels himself also in a manner very far removed from the ' first. Some of his best poems are free, fantastic,' uproarious poems, adventurous or absurd. He shakes himself loose• when he takes to ballad metres. He is never notable for economy of means : in these poems he revels in redundancy and makes it a virtue. He grows more and more wild and wordy. Rhymes lead him where they choose. An easy antithetic balance springs up in the structure of his thought and adds to the air of speed and breathlessness.

He has a fit subject to his hand in his " Ballad of Dick Turpin," and his poem gallops along with huge zest. It is hard to say why an antithetic construction should produce this feeling of rapidity—in part, no doubt, because thought ' follows it easily, and there is no need for concentration. The effect is indisputable :—

" He needed neither spur nor whip. He was borne on a darker gale. He rode like a hurricane-haunted ship, with the doom wind in her sail ; He rode for the one impossible thing ; that, in the morning light, The towers' of. York might waken him—from London, and last ,night.

He rode to prove himself another, and leave himself behind ; And the hunted self was like a cloud ; but the hunter like the wind."

He is perhaps at the very height of his bent when he combines with this ballad-carelessness and hurry a certain porten- tously grave and farcical nonsense. It is here that his fancy has completest play ; not among wood-spirits and butterflies, but among positive non-existences, things never to be taken seriously for a minute. " The Silver Crook " is full of • examples: its very beginning :- " I was mistuk, once, for the Poape of Roame "- is sufficient to start us well off into extravaganza, and the fun increases to the highest pitch when we read of the haunting of young Dick :—

A wild potatur, as big as a man, Arose and winked its eye. He says it took his arm that night, And waggled its big brown head,

Then sang : This world will never go right

Till Drunken Dick be dead."

A word should be said, also, in favour of the poems in which Mr. Noyes lays about him among his traducers, and his very vigorous assaults on modern intellectual poets and libertarians. Here we are wholly with Mr. Noyes, and against his enemies. There can be no question in our mind as to who is right. The great traditions of English poetry are upheld in high-spirited fashion against puling of the rieo-Georgians, and if we owed Mr. Noyes no other debt of thanks we should be grateful to him for this service to literature. But we do owe Mr. Noyes many another debt. He has enriched our English verse with some of the jolliest and most rollicking lyrics ever sung ; he has inspired the youth of the country with the glamour of imperishable deeds, and written greatly of great things.