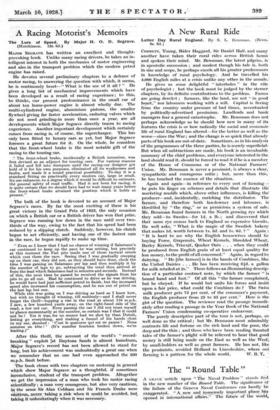 MaJon SEGRAVE has written an excellent and thought- provoking book. Unlike many racing drivers, he takes an in- telligent interest in both the mechanics of motor engineering and also in the transport problem which the modern petrol engine has raised.

He devotes several preliminary chapters to a defence of motor racing, to answering the question with which, it seems, he is continously beset—" What is the use of it all ? " He gives a long list of mechanical improvements which have beep developed as a result of racing experience ; to this, he thinks, our present predominance in the small car of about ten horse-power engine is almost wholly due. The multi-eylindered engine, aluminium pistons, the smaller flywheel giving far faster acceleration, enduring valves which do- not need grinding-in more than once a year, are all developments which -Major Segrave directly traces to racing experience. Another important development which certainly comes from racing is, of course, the supercharger. This has only been fitted to luxury cars as yet, but Major Segrave foresees a great future for it. On the whole, he considers that the front-wheel brake is the most notable gift of the racing to the touring car.

The front-wheel brake, incidentally a British invention, was first devised as an adjunct for touring cars. For various reasons it failed and fell into disrepute until the racing-car designer got hold of it for his own purposes, eliminated all its weaknesses and faults, and made it a sound practical possibility. To-day it is a standard fitting on practically every modern car, large or small. Its_use enhances, to a degree which it would be difficult to estimate, the 'general safety of road traffic. Had it not been for racing, it is quite certain that we should have had to wait many years before the front-wheel brake attained the position which it holds at. present."

Segrave's races. By far the most exciting of these is his great victory in the Grand Prix of 1923, the only occasion on:which a British car or a British driver has won that prize. Segrave was running low down in the race until over two- thirds of the way, owing to the fact that his speed had been reduced by a slipping clutch. Suddenly, however, his clutch began to act efficiently, and having one of the fastest cars in the race, he began rapidly to make up time.

" Even so I knew that I had no chance of winning if Salamano's car continued to keep up the pace he was setting, but precisely at this moment the Fiat pits made one cif those tactical errors which cost them the race. Seeing that I was gradually creeping up on their car, they did not; as they should have done, clock the time I was gaining on Salamano per lap and then multiply it by the number of laps to go, subtracting the total thus arrived at from the lead which Salamano had in minutes and seconds. Instead of *this, the next time he passed he received the signals from his pits to go all out. Had he continued to drive as he was driving, he would have had just sufficient petrol to finish, but the increased speed also increased his consumption, and he ran out of petrol on the last lap but one. While this was going on I was driving as hard as I knew how, but with no thought of winning, till suddenly—and I shall never forget the thrill—topping a rise in the road at about 116 m.p.h. I Saw, a few hundred yards away, on the right-hand side of the road, a low red car. Even passing the car I did not trust myself to-glance momentarily at the number, so certain was I that it could not be I Yet it was, for no sooner had we shot by than Dutoit, letting go everything, and making a funnel . of his hands close to my ear, shouted : C'est le quatorze qui eat en panne ! Nous sommes en tete ! ' (It's number fourteen broken down, we're leading.)" After this thrill, the account of the world's " record- breaking " exploit [at Daytona Sands is almost humdrum. Major Segrave's record has not been allowed to stand for lOng, but his achievement was undoubtedly a great one when we' remember that no one had even approached the 200 m.p.h. limit before.

The book closes with two chapters on motoring in general which show Major Segrave as a thoughtful, if sometimes inconclusive, student of the transport problem. Altogether we get the impression of a man who took his motor racing scientifically ; a man very courageous, but also very cautious, in the sense Sir Alan Cobham and Sir Francis Drake were • (*Wow., never: taking risk when it could- be avoided, but taking it unhesitatingly when it was necessary.