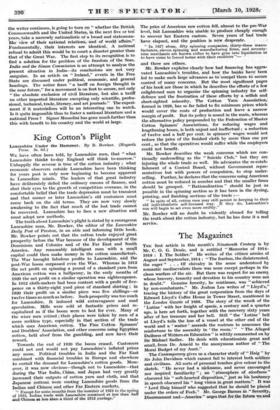 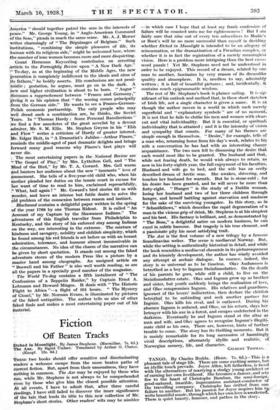 THE first article in this month's Nineteenth Century is by Mr. C. 0. G. Dottie, and is entitled " Memories of 1914- 1918 : I. The Soldier." He writes of the citizen armies of August and September, 1914: " The fearless, the disinterested, the eager " . . . Of chivalry in the sense understood by romantic mediaevalists there was none except perhaps in the clean warfare of the air. But there was respect for an enemy whose bravery, tenacity and devotion to his country were not in doubt." Genuine ferocity, he continues, was " achieved by non-combatants." Mr. Joshua Lea writes of " Lloyd's," tracing the history of the great corporation from the days of Edward Lloyd's Coffee House in Tower Street, mentioned in the London Gazette of 1688. The story of the wreck of the Lutine ' with her freight of specie, a century and a quarter ago, is here set forth, together with the recovery sixty years after of her treasure and her bell. Still " the Lutine ' bell at Lloyd's tolls the loss of a vessel at the other end of the world and a ' waiter' ascends the rostrum to announce the misfortune to the assembly in ' the room. " " The Alleged Dullness of Writers on Education ". is wittily commented on by Sir Michael Sadler. He deals with educationists great and small, from Dr. Arnold to the anonymous author of " The Moral Budget of my Aunt."

The .Contemporary gives us a. character study of " Haig " by Sir John Davidson which cannot fail to interest both soldiers and civilians. All sorts of personal touches give colour to the sketch. " He never had a nickname, and never encouraged nor inspired. familiarity " ; an " atmosphere of aloofness " obscured his " soft-hearted disposition," just as his hesitancy in speech obscured his " long vision in great matters:" It was " Lord Haig himself who suggested that he should be placed under the orders of Foch." Mr. George Barnes in "Security, Disarmament and—America " urges that for the future we and

America " should together patrol the seas in the-interests of peace." Mr. George Young, in " Anglo-American Command of the Seas," pleads in much the same sense. Mr. A. J. Mercer writes charmingly of " The Beguinages of Belgium." Such institutions, " combining the simple pleasures of life, its human with its religious side," might be welcomed here, where the number of lone women becomes more and more disquieting.

Count Hermann Keyserling contributes. an arresting article to the Fortnightly Review upon " A New Dark Age." ," To-day, as at the beginning of the Middle Ages, the pew generation is completely indifferent to the ideals and aims of its fathers," he boldly asserts. His conclusions are not pessi- mistic ; gestation, he argues, must go on in the dark. A new and higher civilization is about to be born. " Augur " discusses a rapprochement between " France and Germany," giving it as his opinion that " the wooing comes principally 'froth the German side." He wants to see a Franco-German- ?olish economic partnership. The only people who may well dread such a combination are, he thinks, the Soviet Tsars. In " Thomas Hardy : Some Personal Recollections we find a few anecdotes of the great novelist by a devout admirer, Mr. S. M. Ellis. Mr. Stephen Gwynn in his " Ebt and Flow " writes a criticism of Hardy of greater interest. Mr. Edgar Holt, in " A Dramatist's Jubilee—Arthur Pinero," reminds the middle-aged of past dramatic delights and brings forward many good reasons why Pinero's best plays will never die.

The most entertaining papers in the National Review are " The Gospel of Play," by Mrs. Lyttelton Gell, and " The Mind of the Bird," by Mr. T. A. Coward. Mrs. Gell warns and _banters her audience about the new " insensate " love of funusement. She tells of a five-year-old child who, when his mother pleaded her duties on the tennis court in excuse for ter want of time to read to him, exclaimed reproachfully, " What, ball again I " Mr. Coward's bird stories fill us with wonder, and leave an intense but futile desire to solve the nld problem of the connexion between reason and instinct. _ Blackwood contains a delightful paper written in the spring of the year 1788 by one Thomas Ridout. It is called " An Account of my Capture by the Shawanese Indians." The adventures of this English traveller from Philadelphia to Kentucky, and the story of his enforced stay among Indians on the way, are interesting in the extreme. The mixture of kindness and savagery, nobility and childish simplicity, which he found among his red friends is set before us with an honest admiration, tolerance, and humour almost inconceivable in the circumstances. No idea of the charm of the narrative can be given by short quotation. It stands out among the faked adventure stores of the modern Press like a picture by a master hand among oleographs. An unsigned article on " Boswell and his Father " is also well worth reading, as are all the papers in a specially good number of the magazine. ' The World To-day contains a fifth instalment of "The Confessions of a Zeppelin Raider," by Captain Ernst A. Lehmann and Howard Mingos. It deals with " The Historic Flight to Africa "—a flight of 101 tours. " The Mystery of Glozel," by Mr. Norman Evans, is illuminated by pietures of the faked antiquities. The author tells us also of other faked finds and makes a most entertaining paper out of Ma Material.