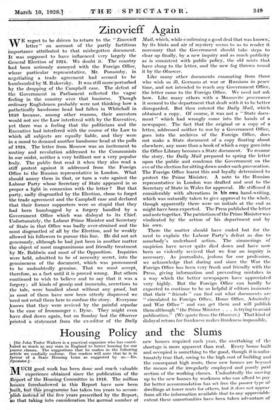 WE regret to be driven to return to. the ".Zinovieff letter" on account of the partly factitious importance attributed to that misbegotten document. It was supposed to have influenced very largely the General Election of 1924. We doubt it: The country had been seriously annoyed with the Foreign Office, whose particular representative, Mr. Ponsonby, in negotiating a trade agreement had seemed to be bamboozled by M. Rakovsky. It was still more perturbed by the dropping of the Campbell case. The defeat of the Government in Parliament reflected the vague feeling in the country over that business. Though ordinary Englishmen probably were not thinking how a pathetically handsome head had fallen in Whitehall in 1649 because, among other reasons, their ancestors would not see the Law interfered with by the Executive, yet there was a feeling that the politicians and the Executive had interfered with the course of the Law to which all subjects are equally liable, and they were in a mood to demand another handsome head at the polls of 1924. The letter from Moscow was an incitement to mutiny and revolution addressed to the Communists in our midst, neither a very brilliant nor a very popular body. The public first read it when they also read a stiff protest against it addressed from the Foreign Office to the Russian representative, in London. What should annoy them in that, or turn a vote against the Labour Party whose Secretary of State appeared in so proper a light in connexion with the letter ? But that party, sadly disgruntled by the Election, chose to forget the trade agreement and the Campbell case and declared that their former supporters were so stupid that they had been humbugged by a forgery handled by a Government Office which was disloyal to its Chief. Unfortunately, the Labour Prime Minister and Secretary of State in that Office was badly over-strained and the most disgruntled of all by the- Election, and he weakly allowed his followers to pursue this line. He did not act generously, although he had just been in another matter the object of most magnanimous and friendly treatment by Mr. Baldwin and most of the Opposition. Inquiries were held, admitted to be of necessity secret, into the genuineness of the document, which was pronounced to be undoubtedly genuine. That we must accept, therefore, as a fact until it is proved wrong. But others continued to wish to believe and to say that it was a forgery ; all kinds of gossip and innuendo, accretions to the tale, were bandied about without any proof,- but as most of them have now been utterly disproved we need not retail them here to confuse the story. Everyone }snows that they were revived by the painful sequelae to the case of Ironmonger v. Dyne. They might even have died down again,, but on Sunday last the Observer printed a statement from the ex-editor of the Daily Mail, which; while confirming a good deal that was known; by its hints and air of mystery seems to us to render it necessary that the Government should take steps to clear up finally, by a new inquiry and as much publicity as is consistent' with public policy, the old mists that have clung to the letter, and the new fog thrown round it by the Observer.

Like many other documents emanating from those who wish us ill, Germans at war or Russians in peace time, and not intended to reach any Government Office, the letter came to the Foreign Office. We need not ask how. Like many others with a Muscovite provenance it seemed to the department that dealt with it to be better disregarded. But then entered the Daily Mail, which obtained a copy. Of course, it was not a " State docu- ment " which had wrongly come into the hands of a newspaper. The fact that the original or a copy of a letter, addressed neither to nor by a Government Office, goes into the archives of the Foreign Office, does not make a State document of a copy floating about elsewhere, any more than a book of which a copy goes into the Office Library becomes a State document. To resume the story, the Daily Mail prepared to spring the letter upon the public and condemn the Government on the eve of the election for sitting down under such provocation. The Foreign Office learnt this and loyally determined to protect the Prime Minister. A note to the Russian representative in London was drafted and sent to the Secretary of State in Wales for approval. He stiffened it considerably with alterations in his own hand-writing, which was naturally taken to give approval to the whole, though apparently there were no initials at the end as might have been expected. The Press published the letter and note together. The patriotism of the Prime Minister was vindicated by the action of his department and by his own.

There the matter should have ended but for the need to explain the Labour Party's defeat as due to somebody's underhand action. The simmerings of suspicion have never quite died down and have now been so violently revived that we fear an inquiry is necessary. As journalists, jealous for our profession, we acknowledge that during and since the War the Foreign Office has been very frank and friendly with the Press, giving information and preventing mistakes in a way which the better newspapers have appreciated very highly. But the Foreign Office can hardly be expected to continue to be so helpful if editors insinuate that their " friends " can find out what documents are " circulated to Foreign Office, Home Office, Admiralty and War Office " and can get them and will publish them although " the Prime Minister . . . is trying to avoid publication." (We quote from the Observer.) That kind of disloyal return for frankness makes frankness impossible.