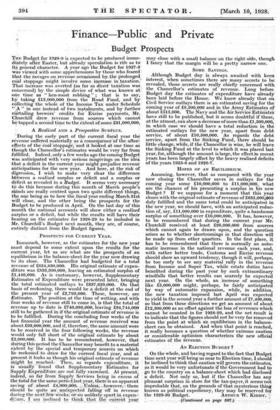 THE Budget, for 1938-9 is expected to be produced imme- diately after Easter, btit alteady speculation is -rife as to its general eharacter. A Year ago the Budget for 1927-8 was viewed with some apprehensions by those who feared that the ravages onrevenue oceesioned by...the prolonged coid stoppage might involye some increase. in taxation: That increase was averted (so far as direct taxation waS concerned) by the simple device of what was known at.' one time as " hen-roost robbing" ; that is to say, by taking £12,000,000 from the Road Fund, and by collecting the whole of the Income Tax under Schedule' "-4 " in one instead of two instalments, and by further- curtailing r brewers' credits for Excise payments, Mr. Churchill drew , revenue from sources which cannot be tapped a second time to the extent-of some 231,000,000.

A Realized AND -A PrOspective Sunittis.

7During the early, part of the current fiscal year the revenue suffered materially as a consequence of the after-` effects of the 'coal 'stoppage,' and it lOoked at -one time as though the Chancellor's estimates would be very far from- fulfilled. Indeed, only a few weeks ago the coming Budget Was anticipated with very serious misgivings on the idea that a deficit in the current year might prejudice revenue anticipations for the new year. And here, at the risk of digression, I wish to make very clear the difference bbtween a realized surplus or deficit and a surplus or deficit as revealed in a Budget,' It seems-very necessary tad do this because during this month of March people's Minds are really centred upon two quite different things; the one being its to how the ,fiscal year ending *arch 31st will close, and the other being the prospects for the Budget to be produced in April. On the last day of this month the national accounts will show either a realized surplus or a deficit, but while the results will have their bearing on the estimates for 1928-29 to be included in Mr. Churchill's Budget next month; they are, of course, entirely distinct from the Budget figures,. - _ PROSPECTS- FOR CURRENT YEAR: Inasmuch, however, as the estimates for -the new year must depend to some extent upon the results for the current year, let us see what are the Prospects_ of an equilibrium in the balance-sheet for the year now drawing to its close. The Chancellor had budgeted for a total revenue of 1834,830,000. His original estimate of expen- diture was £833,390,000, leaving an estimated surplus of £1,440,000. As is customary, however, Supplementary Estimates of Expenditure were presented later, bringing the total estimated outlays to £837,629,000. On that basis of reckoning; there would be a deficit at the end of the present year of 12,799,000. These, however,- are Estimates. The position at the time of writing, and with four weeks of revenue still to come in, is that the total of revenue up to date is £740,086,000, leairing £94,744,000 still to be gathered in if the original estimate of revenue is to be fulfilled. During the concluding four weeks of the last financial year the amount of revenue received was about £93,000,000, and if, therefore, the same amount were to be received in the four following weeks, the revenue would only fall ShOrt of the original estimate by about £2,000,000. It has to be remembered,- however, that during this period the Chancellor may benefit to a material extent by the special and temporary sources on which lie • reckoned-to draw for the current fiscal year, and at present it looks as though his original estimate of revenue might be :reached.- Then; as regards eijpenditure, it is usually found that Supplementary Estimates for Supply Expendittire. are not fully exercised. At present; indeed, so far .-from'' Supply Services being in excess of the total forthe same.pericd4a.st.year, there is an apparent saving.. of :about 4000,060, ;;Unlesi;:..-however,-.. there. • should be quite an. unexpected falling' -Off in revenue during the neif,f6W-weeks,oir-in unlikely sport in expen,-: di;nre I am inclined to think that the ciuTezif_y_eal may close with a small balance on the right -side, though I 'fancy that the margin will be a pretty narrow one.

SOME SAVINGS.. Although Budget day is always awaited with keen interest, when sometimes there are many secrets to be revealed, those secrets are really chiefly concerned with the Chancellor's estimates of revenue. Long before Budget day the estimates of expenditure have already been laid before the House. We know already that on Civil Service outlays there is an estimated saving for the coming year of 18,500,000, and, in the Army Estimates of about £515,000. 'The Navy and the Service Estimate's have still to be published, but it seems doubtful if these, at the utmost, can show a decrease of more than £1,500,000, in which case we- should have -a total reduction in the estimated =outlays for the new year, apart from debt service, of about £10,500,000. As regards the debt service, apart from the - Sinking Fund, there should be little change, while, if the Chancellor is wise, he will leave the Sinking Fund at the level to which it was placed last year, for, although the amount is large, the effect in recent years has been largely offset by the heavy realized deficits of the years 1925-6 and 1926-7.

HOPES OF AN EQUILIBRIUM.

Assuming, however, that as compared with the yeat now closing the Chancellor saves in outlays for the coming year some £10,000,000 to 111,000,000, what are the chances of his presenting a surplus in his new Budget ? If we suppose for a moment that this year closes with the original estimate of revenue of £835,000,000 duly fulfilled and the same total could be anticipated in the new year, we should have, with an anticipated reduc- tion of, say, £11,000,000 in expenditure, quite a handsome surplus of something over £10,000,000.. It has, however, to be remembered that during the current year Mr: Churchill received at least £26,000,000 from sources which cannot again be drawn upon, and the question arises as to whether shortcomings in that direction will be made up from other quarters. In the first place, it has to be remembered that there is normally an auto:, matic increase in the national revenue each year, and, with rather better trade, Customs and Excise revenue should show an upward tendency, though it will, perhaps; be too early to see any material rally in the revenue from Income and Super Tax, while estate duties have benefited during the past year by such extraordinary windfalls that better results can scarcely be expected next year. On the whole, an increase of something like £5,000,000 might, perhaps, be fairly anticipated by way of automatic expansion, while, in addition, the new taxation imposed last April was expected to yield in the second year a further amount of £7,490,000, so that from these directions we get an amount of about 212,500,000 as an offset against the loss of revenues which cannot be-counted in for 1928-29, and the net result is to indicate that the figures should not be very far removed from the point at which an equilibrium in the balance.. sheet can be obtained. And when that point is reached, it really becomes a question of whether extreme caution or considerable optimism 'characterizes the new official estimates Of the revenue. -

On the whole, and having regard to the fact that Budget time next year will bring us near to Election time; I should be inclined to think that caution will govern the estimates, as it would be very unfortunate if the Government had to go to the country on a balance-sheet which had disclosed a deficit. Not only so, but if the Chancellor has any pleasant surprises in store for the tax-payer, it seems not improbable that, on the grounds of that mysterious thing known as political' expediency, they may be reserved for