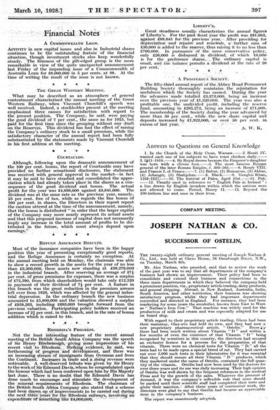 What niay be described as an atmosphere of general Contentment characterized the 'annual meeting of the Great Western . Railway, when NiScount Churchill's speeCh was well received. Indeed, a stockhOlder present at the meeting emphasiled three causes The satisfaction with regard to the preSent posit**. The CoMpany; he said were paving the good diliidend of 7 per cent., the, same as for. 1925, but paid for the first time since the grOnping_ without any draft on the Reserves. This dividend has had the :effect of raising the ComPany's ordinary -Stock to a. small premium, while the satisfactory character of the annual report had been fully substantiated by the statements Made by Viscount Churchill in his first address at the meeting.