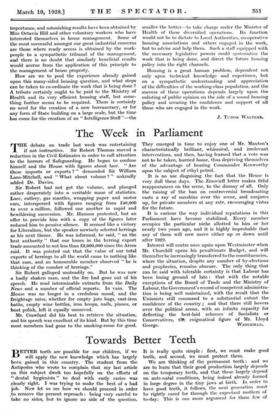 The Week in Parliament T HE debate on trade last week

was entertaining if not instructive. Sir Robert Thomas moved a reduction in the Civil Estimates in order to call attention to the horrors of Safeguarding. He began to confuse himself and the House with figures about lace. " Are these imports or exports ? " demanded Sir William Lane-Mitchell, and " What about volume ? " unkindly added Dr. Davies.

Sir Robert had not got the volume, and plunged rather desperately into a veritable maze of statistics. Lace, cutlery, gas mantles, wrapping paper and motor cars, interspersed with figures ranging from £40,000 to over a million, followed one another in rapid and bewildering succession. Mr. Hannon protested, but an offer to provide him with a copy of the figures later reduced him to pensive silence. It seemed like a victory for Liberalism, but the speaker unwisely selected herrings as his next theme. He was informed, he said, " on the best authority " that our losses in the herring export trade amounted to not less than £3,000,000 since the Arcos raid. It was pointed out that the value of our total exports of herrings to all the world came to nothing like that sum, and an honourable member observed " he is thinking of the number of herrings."

Sir Robert galloped unsteadily on. But he was now a badly shaken man, and the fire had gone out of his speech. He read interminable extracts from the Daily News and a number of official reports. In vain. The House was no longer in a credulous mood, and the freightage rates, whether for empty jute bags, cast-iron baths, empty wine bottles, iron hoops, nails, pianos, or boot polish, left it equally unmoved.

Mr. Crawfurd did his best to retrieve the situation, and his speech was excellent of its kind. But by this time most members had gone to the smoking-room for good. They emerged in time to enjoy one of Mr. Maxton's characteristically brilliant, whimsical, and irrelevant interventions, and then, having learned that a vote was not to be taken, hurried home, thus depriving themselves of the advantage of hearing Commander Kenworthy upon the subject of ethyl petrol.

It is no use disguising the fact that the House is very dull these days. The Zinovieff letter makes fitful reappearances on the scene, to the dismay of all. Only the raising of the ban on controversial broadcasting casts a ray of sunshine over the scene, and conjures up, for private members at any rate, encouraging vistas for the future.

It is curious the way individual reputations in this Parliament have become stabilized. Every member occupies the particular niche allotted to him or her nearly two years ago, and it is highly improbable that any of them will now move either up or down until after 1929.

Interest will centre once again upon Westminster when Mr. Churchill opens his penultimate Budget, and will thereafter be increasingly transferred to the constituencies, where the situation, despite any number of by-elections and prophecies, remains obscure: The Only thing that can be said with tolerable certainty is that Labour has been losing ground of late : that with the notable exceptions of the Board of Trade and the Ministry of Labour, the Government's record of competent administra- tion is being well maintained, with the result that the Unionists still command to a substantial extent the confidence of the country ; and that there still hovers over the political arena, with an infinite capacity for deflecting the best-laid schemes of Socialists or Conservatives, tit enigmatical figure of Mr. Lloyd