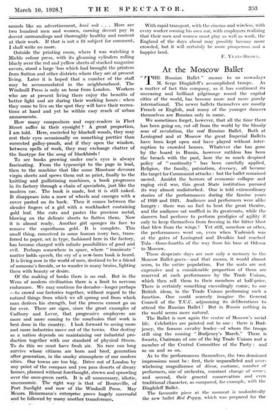 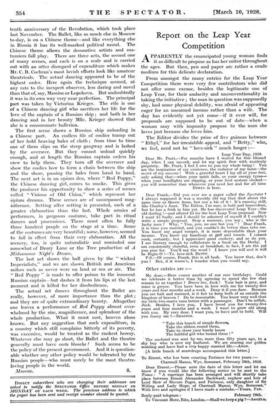 At the Moscow Ballet

"THE Russian Ballet " means to us nowadays M. Serge Diaghileff's accomplished troupe. As a matter of fact this company, as it has continued its unceasing and brilliant pilgrimage round the capital cities of the world, has become more and more purely international. The newer ballets themselves are mostly French or English, and many of the younger dancers themselves are Russian only in name.

We sometimes forget, however, that all the time there has been going on, cut off from the world by the bloody seas of revolution, the real Russian Ballet. Both at Leningrad and at Moscow the great Imperial Ballets have been kept open and have played without inter- ruption to crowded houses. Whatever else has gone by the board in Russia, however ruthless has been the breach with the past, here the so much despised policy of " continuity " has been carefully applied. Religion, the family, patriotism, decency, all became the target for Communist attacks : but the ballet remained sacred. Amidst the horrors of economic collapse and raging civil war, this great State institution pursued its way almost undisturbed. One is told extraordinary stories of the performances during the famine years of 1920 and 1921. Audience and performers were alike hungry : there was no fuel to heat the great theatre, and the audience sat muffled in its greatcoats, while the dancers had perforce to perform prodigies of agility if only to keep themselves from freezing in the bitter blast that blew from the wings ! Yet still, somehow or other, the. performances went on, even when Yudenich was at the gates of Leningrad and Denikin had reached Tula—three-fourths of the way from his base at Odessa to Moscow.

Those desperate days are now only a memory to the Moscow Ballet-goers—and that means, it would almost seem, to the entire population. For the seats arc not expensive and a considerable proportion of them are reserved at each performance by the Trade Unions, which then sell them to their members at half-price. There is certainly something exceedingly comic, to our British ideas, in the Trade Unions performing such a function. One could scarcely imagine the General Council of the T.U.C. adjourning its deliberations to attend the Russian Ballet ! But in Russia nothing in the world seems more natural.

The Ballet is now again the centre of Moscow's social life. Celebrities are pointed out to one : there is Bud- jeney, the famous cavalry leader—of whom the troops still sing the rousing " Budjeney's March." There is Swartz, Chairman of one of the big Trade Unions and a member of the Central Committee of the Party : and so on and so on.

As to the performances themselves, the two dominant impressions must be : first, their unparalleled and over- whelming magnificence of decor, costume, number of performers, size of orchestra, constant change of scene ; and second, their general conservatism and even traditional character, as compared, for example, with the Diaghileff Ballet. The favourite piece at the 'moment is undoubtedly the new ballet Red Poppy, which was prepared for the tenth anniversary of the Revolution, which took place last November. The Ballet, like so much else in Moscow to-day, is on a Chinese theme—and like everything else in Russia it has its well-marked political moral. The Chinese theme allows the decorative artists and cos- tumiers full play. There are three acts, the second one of many scenes, and each is on a scale and is carried out with an utter disregard of expenditure which makes Mr. C. B. Cochran's most lavish efforts look like amateur theatricals. The actual dancing appeared to-"be of the highest order. Here again the technique seemed, at any rate to the inexpert observer, less daring and novel than that of, say, Massine or Lopokova. But undoubtedly it was in its own way very near perfection. The principal part was taken by V ictorina Krieger. The role is one of a Chinese dancing girl who sacrifices her life for the love of the captain of a Russian ship ; and both in her dancing and in her beauty Mlle. Krieger showed that she is a consummate ballerinn.

i The first scene shows a Russian ship unloading in a Chinese port. An endless file of coolies tramp out of her hold heaving bales of cloth ; from time to time one of them slips on the steep gangway and is lashed by the overseer. But they cannot unload quickly enough, and at length the Russian captain orders his crew to help them. They turn off the overseer and show the coolies how to form a chain between the ship and the shore, passing the bales from hand to hand. The next act is in an opium den, where " Red Poppy," the Chinese dancing girl, comes to smoke. This gives the producer his opportunity to show a series of scenes called " Visions of Old ' China," which represent her Opium dreams. These scenes are of unsurpassed mag- nificence. Setting after setting is presented, each of a greater elaboration than the last. Whole armies of performers, in gorgeous costume, take part in ritual dances and processions. There must often be fully three hundred people on the stage at a time. Some of the costumes are very beautiful; some, however, seemed to fail in effect from their very elaboration. All the scenery, too, is quite naturalistic and reminded one somewhat of Drury Lane or the Tree production of A Midsummer Night's Dream.

The last act shows the ball given by the " wicked Imperialists," and we are shown British and American sailors such as never were on land or sea or air. The " Red Poppy " is made to offer poison to the innocent Russian captain—but dashes it from his lips at the last moment and is killed for her disobedience.

The actual set dances throughout the Ballet are really, however, of more importance than the plot ; and they are of quite extraordinary beauty. Altogether one leaves a performance of Red Poppy almost over- whelmed by the size, magnificence, and splendour of the whole production. What it must cost, heaven alone knows. But any suggestion that such expenditure, in a country which still complains bitterly of its poverty, was excessive, would be treated as the rankest heresy. Whatever else may go short, the Ballet and the theatre generally must have carte blanche ! Such seems to be the policy of the present government. And it is question- able whether any other policy would be tolerated by the Russian people—who must surely be the most theatre- loving people in the world.