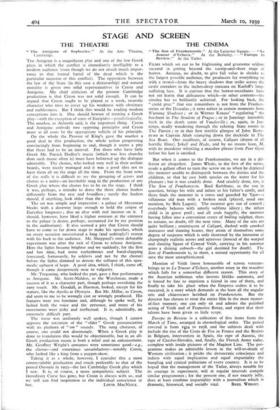 "The Son of Frankenstein." At the Leicester Square.—" Le Joueur d'Echecs." At the Berkeley. "Europe In Review." At the Tatler.

Firms which set out to be frightening and gruesome seldom succeed in getting beyond the turnip-and-sheet stage of horror. Anxious, no doubt, to give full value in shrieks to the largest possible audience, the producers lay everything on with a trowel—from the heavy shadows that strike across the castle corridors to the inches-deep mascara on Karkes long- suffering face. It is curious that the horror-merchants have not yet learnt that delicatesse which—in other contexts—the cinema has so brilliantly achieved. For looking back, the " cauld grue " that one remembers is not from the Franken- steins or the Draculas ; it rests rather in certain moments from Warning Shadows ; or in Werner Krauss' " regulating " the fox-hunt in The Student of Prague ; or in Jannings immobile back in the death scene of Vaudeville ; or, again, in Jan- nings, madly wandering through the echoing State rooms in The Patriot ; or in that first terrible glimpse of John Barry- more as Captain Ahab stumping down the dockside in The Sea Beast. One recollects, of course, Caligari (doyen of all horrific films), Yekyll and Hyde, and by no means least, M, with its murderer whistling a macabre phrase from Peer Gynt before his lust is satisfied.

But when it comes to the Frankensteins, we are in a dif- ferent air altogether. James Whale, in the first of the series, made a gallant effort to turn the screw on us when he depicted the monster unable to distinguish between the daisies and the children, so that he cast both species on the water for his pleasure ; but it was crudely done. And crudely done, too, is The Son of Frankenstein. Basil Rathbone, as the son in question, brings his wife and infant to his father's castle, and there finds the monster in a coma and guarded by Ygor—a villainous old man with a broken neck (played, need one mention, by Bela Lugosi). The monster gets out of control ; everybody behaves with utterly sublime idiocy ; the infant child is in grave peril ; and all ends happily, the monster having fallen into a convenient crater of boiling sulphur, there to remain, no doubt, till the next time. Many of the sets are quite brilliant ; reminiscent of Caligari, slashed with crooked staircases and slanting beams, they attain of themselves some degree of suspense which is only shattered by the intrusion of clumpingly realistic actors and actresses (instead of the warped and slanting figure of Conrad Veidt, carrying in his automat arms a shining cobweb—the girl destined for death). The Son of Frankenstein is, in short, a missed opportunity for all save the most unsophisticated.

Mention of Veidt (most honourable of screen veterans) brings us to Le Youeur d'Echecs, another essay in the macabre which fails for a somewhat different reason. This story of the Austrian nobleman who invents lifelike automata, and is forced by fate to imprison a friend in one of them, and finally to take his place when the Empress orders it to be executed, is a story which demands at the least all the angular sets and chiaroscuro lavished on Frankenstein. But the director has chosen to treat the entire film in the most matter- of-fact manner; one can only sit and admire the polished acting of Veidt and of Francoise Rosay, and regret that their talents have been given so little scope.

Europe in Review is a collection of five items from the March of Time, arranged in chronological order. The period covered is from 1%34 to 1938, and the subjects dealt with include the rise of the Croix de Feu in France and the Rexists in Belgium, intervention in Spain, the rape of Austria, the rape of Czecho-Slovakia, and, finally, the French Army today, complete with inside pictures of the Maginot Line. The pro- gramme makes an admirable lesson in the will-to-death of Western civilisation ; it pricks the democratic conscience and indicts with equal implication and equal impartiality the bungling and cynical politicians of every country. It is to be hoped that the management of the Tatler, always notable for its courage in experiment, will at regular intervals compile similar programmes ; for the present one, if not exactly jolly, does at least combine impartiality with a journalism which is