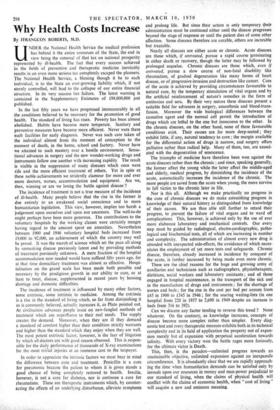 UNDER the National Health Service the medical profession has behind it the entire resources of the State, the end in view being the removal of that tax on national prosperity represented by ill-health. The fact that every success achieved in the fields of preventive and therapeutic medicine inevitably results in an even more serious tax completely escaped the planners. The National Health Service, a blessing though it be to each individual, is to the State an ever-growing liability which, if not sternly controlled, will lead to the collapse of our entire financial structure. In its very success lies failure. The latest warning is contained in the Supplementary Estimates of £98,000,000 just published.

In the last fifty years we have progressed immeasurably in all the conditions believed to be necessary for the promotion of good health. The standard of living has risen. Poverty has been almost abolished. Habits have become more temperate. Sanitary and preventive measures have become more efficient. Never were there such facilities for early diagnosis. Never was such care taken of the individual almost from the moment of conception to the moment of death, in the home, school and factory. Never have we attained to such mastery over a hostile environment. Sensa- tional advances in surgery and the new wonder-working drugs and instruments follow one another with increasing rapidity. The result is visible in the suppression of many diseases which once were rife and the more efficient treatment of others. Yet in spite of these noble-achievements we stridently clamour for more and ever more doctors, nurses, accommodation and equipment. Are we, then, winning or are we losing the battle against disease ?

The incidence of treatment is not a true measure of the incidence of ill-health. Many people believe that the rise in the former is due entirely to an awakened social conscience and to more humanitarian legislation. This view, however, implies too harsh a judgement upon ourselves and upon our ancestors. The well-to-do might perhaps have been more generous. The contributions to the voluntary hospitals by the working classes were certainly meagre having regard to the amount spent on amenities. Nevertheless between 1900 and 1946 voluntary hospital beds increased from 19,000 to 92,000, an achievement of which the country may well be proud. It was the march of science which set the pace all along by unmasking disease previously latent and by providing methods of treatment previously unknown. A mere fraction of the hospital accommodation now needed would have sufficed fifty years ago, for at that time domiciliary treatment was almost as effective. Hospi- talisation on the grand scale has been made both possible and necessary by the prodigious growth in our ability to cure, or at least to treat, disease, supplemented in recent years by housing shortage and domestic difficulties.

The incidence of treatment is influenced by many other factors, some extrinsic, some intrinsic to medicine. Among the extrinsic is a rise in the standard of living which, so far from diminishing it as is commonly believed, actually increases it, as Plato pointed out. As civilisation advances people insist on new-fangled methods of treatment which are superfluous to their real needs. The supply creates the demand. Moreover, when they are ill they demand a standard of comfort higher than their condition strictly warrants and higher than the standard which they enjoy when they are well. The most potent extrinsic factor, however, is the fear of litigation by which all doctors are with good reason obsessed. This is respon- sible for the daily performance of thousands of X-ray examinations for the most triVial injuries at an immense cost to the taxpayer.

In order to appreciate the intrinsic factors we must bear in mind the difference between cure and treatment. Penicillin is a cure for pneumonia because the patient to whom it is given stands a good chance of being completely restored to health. Insulin, however, is not a cure for diabetes, nor is cortisone a cure for rheumatism. These are therapeutic instruments which, by counter- acting the effects of an underlying .disturbance, alleviate symptoms administration must be continued either until the disease progresses beyond the stage of response or until the patient dies of some other affection. Some diseases therefore are curable, others are incurable but treatable.

Nearly all -diseases are either acute or chronic. Acute diseases are those which, if untreated, pursue a rapid course terminating in either death or recovery, though the latter may be followed by prolonged sequelae. Chronic diseases are those which, even if untreated, pursue a slow course of non-fatal disability like rheumatism, of gradual degeneration like many forms of heart disease, or of progressive invasion and destruction like cancer. Cure of the acute is achieved by providing circumstances favourable to natural cure, by the temporary stimulation of vital organs and by the artificial reinforcement of nature's remedies in the form of antitoxins and sera. By their very nature these diseases present a suitable field for advances in surgery, anaesthesia and blood-trans- fusion. Moreover the wide biological differences between the causative agent and the normal cell permit the introduction of drugs which are lethal to the one but innocuous to the other. In the chronic diseases, on the other hand, none of these favourable conditions exist. Their causes are far more deep-seated ; they exhibit little, if any, natural tendency to cure ; the margin available for the differential action of drugs is narrow, and surgery offers palliative rather than radical help. Many of them, too, are associ- ated with the degeneration of senescence.

Nor is this all. Although we make practically no progress in the cure of chronic diseases we do make astonishing progress in knowledge of their natural history as distinguished. from knowledge of their causes. We are thus able still further to retard their progress, to prevent the failure of vital organs and to ward off complications. This, however, is achieved only by the use of ever more elaborate laboratory and mechanical controls. Our every step must be guided by radiological, electro-cardiographic, patho- logical and biochemical tests, all of which are increasing in number and complexity. The administration of almost every new drug is attended with unexpected side-effects, the avoidance of which neces- sitates the employment of yet more tests and safeguards. Chronic disease, therefore, already increased in incidence by conquest of the acute, is further increased by being made even more chronic.

These are the chief reasons for the huge and growing army of auxiliaries and technicians such as radiographers, physiotherapists, dietitians, social workers and laboratory assistants ; and of those engaged in hospital maintenance, in the transport of the sick and in the manufacture of drugs and instruments ; for the shortage of nurses and beds ; for the rise in the cost per bed per annum from £45 in 1900 to £345 in 1946; for the soaring waiting-lists (in one hospital from 220 in 1937 to 2,690 in 1949 despite an increase in beds from 316 to 392).

Can we discern any.factor tending to reverse this trend ? None whatever. On the contrary, as knowledge increases, concepts of disease become more complex rather than simpler. Every diag- nostic test and every therapeutic measure exhibits both in its technical complexity and in its field of application the property not of expan- sion merely but of expansion with perpetual acceleration towards infinity. With every victory won the battle rages more furiously, for the ultimate victor is Death.

This, then, is the paradox—unlimited progress towards an unattainable objective, unlimited expansion against an inexpansile circumference. It is abundantly clear that we are rapidly approach- ing the time when humanitarian demands can be satisfied only by inroads upon our resources in money and man-power prejudicial to our standard of living, when the claims of physical health will conflict with the claims of economic health, when "cost of living" will acquire a new and ominous meaning.