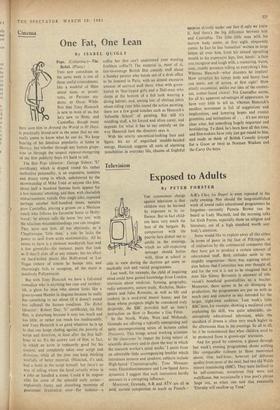 One Fat, One Lean

By ISABEL QUIGLY Pepe. (Columbia.)—The Rebel. (Plaza.) The film Pepe (director: George Sidney; `L/' certificate), which is draped round his rather ineffective personality, is an expensive, tasteless and dreary romp in which, unbolstered by the showmanship of Mike Todd or anyone like him, about half a hundred famous faces appear for a few minutes' smirking, and then, with charadish embarrassment, vanish. One single joke. repeated Perhaps another half-hundred times, sustains poor Cantinflas, playing a groom on a Mexican ranch who follows his favourite horse to Holly- wood: he always calls the horse 'my son,' with the hilatious misunderstandings you can imagine. They have cast him, all too obviously, as a Chaplinesque. 'little man,' a role he lacks the power to save from acute sentimentality. All he seems to have is a pleasant monkeyish face and a few gimmicks—for instance, pants that look as if they'll slide off at any minute; but his effect on hard-boiled places like Hollywood or Las Vegas (where of course he bumps into, and charmingly fails to recognise, all the stars) is positively Pollyannaish.

But with Tony Hancock we have a full-sized comedian who is anything but cute and monkey- ish, a glum fat man who almost looks like a gone-to-seed Hamlet in disguise because he really has something to say about (if it doesn't sound too inflated) the human condition. The Rebel (director: Robert Day; 'U' certificate), his first film, is disturbing because it says too much and too little, or rather too much too inadequately, and Tony Hancock is so good whatever he is up to that one keeps chafing against the poverty of script and direction, at least after the first half- hour or so. Ws the screwy sort of film, in fact, in which an actor is topheavily good for his context, and completely takes over script and direction; while all the time you keep thinking wistfully of better material. (Hancock, it's said, had a hand in the script himself, but there's no Way of telling where the hand actually wrote in a, joke or handled a scene.- Could it be respon- sible for some of the splendid early scenes— explosively funny and disturbing moments of passionate frustration over—for instailce--a coffee bar that can't understand your wanting frothless coffee?) The material is, most of it, fair-to-average British film comedy stuff about a Sunday painter who bursts out of a drab office to be lionised in Paris, with an almost excessive amount of satirical stuff there, what with green- haired or blue-lipped girls and a Dali-man who sleeps at the bottom of a fish tank wearing a diving helmet, and, among lots of obvious jokes about riding your bike round the action painting, there are a few good touches such as Hancock's 'Infantile School' of painting. But still it's middling stuff, a bit forced and often corny, and depends for what it has to say entirely on the way Hancock (not the director) says it.

With his utterly uncomical-looking face and figure, his air of anguished muddle-headed energy. Hancock suggests all sorts of alarming possibilities in everyday life, chasms of frightful surprise directly under our feet if only we knew it. And there's the big difference between him , and Cantinflas. The lithe little man with his narrow body seems, at first sight, eloquently comic. In fact he has 'comedian' written in large letters all over him, from his absurd upcurling mouth to his expressive hips, feet, hands: a face you recognise and laugh with, a reassuring, warm, cosy, cuddly presence telling us everything's fine. Wherea3 Hancock—what disasters he implies! How inexplicit his lumpy body and heavy face can seem, out of action, at first sight! How utterly uncomical, unlike our idea of the exuber- ant, rubber-faced clown! Yet Cantinflas seems, for all his apparent advantages of appearance, to have very little to tell us, whereas Hancock's smallest movement is full of suggestions and implications, and lowering hopes and cosmic grumbles, and intimations of . . . it's not always clear what, but something hugely important and bewildering. To think he's been here all this time, and film-makers have only just got round to him, and made us think of British Comedy (except for a Goon or two) as Norman Wisdom and the Carry On boys.