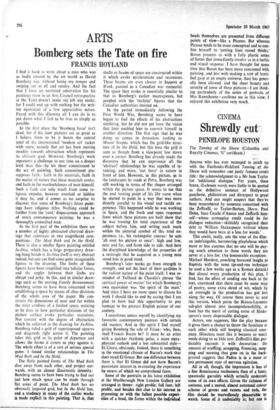 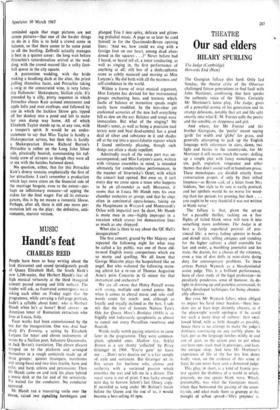 Anyone who has ever managed to catch up with the Fairbanks-Pickford Taming of. the Shrew will remember one justly famous credit title: the acknowledgment to a Mr Sam Taylor for 'additional dialogue.' For years, these brave, ill-chosen words were liable to be quoted as the definitive instance of Hollywood gaucherie, philistinism and disrespect to great authors. And one might suspect that they've been remembered by someone concerned with the Zeffirelli, or Taylor-Burton, Shrew. Paul Dehn, Suso Cecchi cl'Amico and Zeffirelli him- self—whose screenplay credit could be for dialogue reduction—skittishly recognised their debt to 'William Shakespeare without whom they would have been at a loss for words.'

This credit, really, sets the tone of the film: an indefatigable, hammering playfulness which more or less assumes that no one will be pay- ing much attention to those words they are never at a loss for. (An honourable exception: Michael Hordern, poaching harassed laughs as Baptista with the same tip-and-run technique he used a'few weeks ago as a Roman dotard-) But almost every production of this play, I find, has the effect of sending one back to the text, convinced that there must be some wisp of poetry, some extra shred of wit, which by an oversight in the production has got lost along the way. Of course there never is; and this version, which pares the Bianca-Lucentio sub-plot almost into incomprehensibility, at least has the merit of cutting some of Shake- speare's more dispensable dialogue.

Actors, one supposes, like the play because it gives them a chance to throw the furniture at each other while still keeping classical com- pany. Directors must like it because so much needs doing to so little text. Zeffirelli's film pre- dictably encrusts it with decoration: the amount of scuffling, scrapping, flouncing, mop- ping and mowing that goes on in the back- ground suggests that Padua is in a more or less permanent state of nervous agitation.

All in all, though, the impression is less of a fine Renaissance restlessness than of a fussy, spasmodic garrulity which actually undercuts some of its own effects. Given the richness of costume, and a muted, almost autumnal colour scheme of greens and russets and rods, the film should be marvelously pleasurable to watch. Some of it undeniably is; but one is

reminded again that stage pictures are not screen pictures—that one of the harder things to do in a film is to hold a crowd scene in balance, so that there seems to be some point to all the bustling. Zeffirelli actually manages it best in a quieter scene: the long wait before Petruchio's tatterdemalion arrival at the wed- ding, with the crowd massed like a sulky foot- ball queue in the city square.

A pantomime wedding, with the bride making a headlong dash at the altar, the priest pulling shameless faces, and Petruchio taking a swig at the consecrated wine, is very latter-

day Italianate: Shakespeare, Sicilian style. It's preceded by -a silly, pretty sequence in which Petruchio chases Kate around storerooms and apple lofts and over rooftops, and followed by one in which the luckless Shrew gets tipped off her donkey into a pond and left to make her own damp way home. All of which Elizabeth Taylor stands up to, at any rate, with a trouper's spirit. It would be an under-

No question, either, that for this Petruchio Kate's dowry remains emphatically the first of her attractions. I can't remember a production which lays more stress on the financial side of the marriage bargain, even to the extent—per- haps an inflationary measure—of upping the stakes for the final wager. For all its extrava- gances, this is by no means a romantic Shrew. Perhaps, after all, there is still one more per- mutation left on the play: the definitive, anti- romantic, inarxist version.