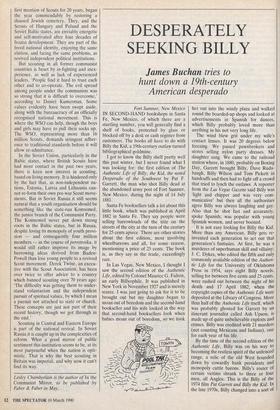 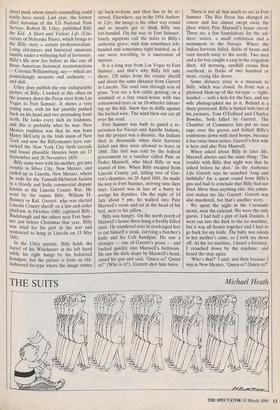 hunt down a 19th-century American desperado

Fort Sumner, New Mexico IN SECOND-HAND bookshops in Santa Fe, New Mexico, of which there are a startling number, you will generally find a shelf of books, protected by glass or blocked off by a desk or cash register from customers. The books all have to do with Billy the Kid, a 19th-century outlaw turned bibliographical goldmine.

I got to know the Billy shelf pretty well this past winter, but I never found what I was looking for: the first edition of The Authentic Life of Billy, the Kid, the noted Desperado of the Southwest by Pat F. Garrett, the man who shot Billy dead at the abandoned army post of Fort Sumner, New Mexico, during the night of 14 July 1881.

Santa Fe booksellers talk a lot about this little book, which was published in April 1882 in Santa Fe. They say people were selling barrowloads of the title on the streets of the city at the turn of the century for 25 cents apiece. There are other stories about the first edition, most involving wheelbarrows and all, for some reason, mentioning a price of 25 cents. The book is, as they say in the trade, exceedingly rare.

In Las Vegas, New Mexico, I thought I saw the second edition of the Authentic Life, edited by Colonel Maurice G. Fulton, an early Billyophile. It was published in New York in November 1927 and is merely scarce. I was just going to ask for it to be brought out but my daughter began to moan out of boredom and the second-hand bookseller and his wife looked in the way that second-hand booksellers look when babies moan out of boredom, so we took

her out into the windy plaza and walked round the boarded-up shops and looked at advertisements in Spanish for dances, which Billy probably loved more than anything in his not very long life.

The wind blew grit under my wife's contact lenses. It was 20 degrees below freezing. We passed pawnbrokers and stores selling nylon party dresses. My daughter sang. We came to the railroad station where, in 1880, probably on Boxing Day, Garrett brought Billy, Dave Ruda- baugh, Billy Wilson and Tom Pickett in handcuffs and then had to fight off a crowd that tried to lynch the outlaws. A reporter from the Las Vegas Gazette said Billy was `light and chipper and was very com- municative' but then all the authorities agree Billy was always laughing and gay. Also that he shot fast and accurately, spoke Spanish, was popular with young Spanish women, and never boozed.

It is not easy looking for Billy the Kid. More than any American, Billy gets re- invented each generation to act out that generation's fantasies. At first, he was a murderer of superhuman skill and villainy; J. C. Dykes, who edited the fifth and only commonly available edition of the Authen- tic Life for the University of Oklahoma Press in 1954, says eight Billy novels, selling for between five cents and 25 cents, were rushed out between the night of his death and 17 April 1882, when the copyright copies of the Authentic Life were deposited at the Library of Congress. More than half of the Authentic Life itself, which was probably ghosted for Garrett by an itinerant journalist called Ash Upson, is made up of quite unbelievable exploits and crimes. Billy was credited with 21 murders (not counting Mexicans and Indians), one for each year of his life.

By the time of the second edition of the Authentic Life, Billy was on his way to becoming the restless spirit of the unfenced range, a relic of the old West hounded down by cowardly bank presidents and monopoly cattle barons. Billy's roster of certain victims shrank to three or four men, all Anglos. This is the Billy of the 1974 film Pat Garrett and Billy the Kid. In the late 1970s, Billy changed into a sort of street punk whom timely counselling could easily have saved. Last year, the former chief historian of the US National Park Service, Robert M. Utley, published Billy the Kid: A Short and Violent Life (Uni- versity of Nebraska Press), which brings to the Billy story a certain professionalism. Lying old-timers and historical amateurs tumble under a withering hail of footnotes. Billy's life now lies before us like one of those American historical reconstructions — Colonial Williamsburg, say — which are painstakingly accurate and authentic and dull.

Utley does publish the one indisputable picture of Billy; 1 looked at this often on the journey down the Pecos river from Las Vegas to Fort Sumner. It shows a very young man, with his hat jauntily pushed back on his head and two protruding front teeth. He looks every inch an Irishman, and this is probably what he was: New Mexico tradition was that he was born Henry McCarty in the Irish slums of New York and now the Billyomanes have ran- sacked the New York City birth records and found plausible Henries born on 17 September and 20 November 1859.

Billy came west with his mother, got into trouble in Silver City, New Mexico, and ended up in Lincoln, New Mexico, where he rode for the Tunstall-McSween faction in a bloody and futile commercial dispute known as the Lincoln County War. He went by the names Billy, William H. Bonney or Kid. Garrett, who was elected Lincoln County sheriff on a law-and-order platform in October 1880, captured Billy, Rudabaugh and the others near Fort Sum- ner just before Christmas that year. Billy was tried for his part in the war and sentenced to hang at Lincoln on 13 May 1881.

In the Utley picture, Billy holds the barrel of his Winchester in his left hand while his right hangs by his holstered handgun, but the picture is from an old- fashioned tin-type where the image comes

up back-to-front and then has to be re- versed. Elsewhere, say in the 1954 Authen- tic Life, the image is the other way round and so people got to think Billy was left-handed. On the way to Fort Sumner, lonely signposts call the miles to Billy's authentic grave, with him sometimes left- handed and sometimes right-handed, as if one were travelling in a succession of

mirrors. • It is a long way from Las Vegas to Fort Sumner, and that's why Billy felt safe there, 120 miles from the county sheriff and about the same distance from Garrett in Lincoln. The road runs through seas of grass. You see a few cattle grazing, or a windmill or a tiny ranch-house with two cottonwood trees or an 18-wheeler labour- ing up the hill. Snow lies in drifts against the barbed wire. The wind blew our car all over the road.

Fort Sumner was built to guard a re- servation for Navajo and Apache Indians, but the project was a disaster, the Indians died in thousands when their harvests failed and they were allowed to leave in 1868. The fort was sold by the federal government to a rancher called Pete or Pedro Maxwell, who liked Billy or was scared of him. When Billy escaped from Lincoln County jail, killing two of Gar- rett's deputies, on 28 April 1881, he made his way to Fort Sumner, arriving nine days later. Garrett was in less of a hurry to avenge his deputies. On the night of 14 July about 9 pm, he walked into Pete Maxwell's room and sat at the head of his bed, next to his pillow.

Billy was hungry. On the north porch of Maxwell's house there hung a freshly killed steer. He wandered over in stockinged feet to cut himself a steak, carrying a butcher's knife and his Colt handgun. He saw a stranger — one of Garrett's posse — and backed quickly into Maxwell's bedroom. He saw the dark shape by Maxwell's head, raised his gun and said, `Quien es? Quien es?' (Who is it?). Garrett shot him twice. There is not all that much to see at Fort Sumner. The Rio Pecos has changed its course and has almost swept away the place where Pete Maxwell's house stood. There are a few foundations for the sol- diers' stores, a small exhibition and a monument to the Navajo. Where the Indian harvests failed, fields of beans and corn stretch away to the north. Two men and a fat boy caught a carp in the irrigation ditch. All morning, sandhill cranes flew overhead, in flocks of two hundred or more, crying like doves.

Some distance away is a museum to Billy, which was closed. In front was a plywood blow-up of the tin-type — right- handed — with a hole for the face, and my wife photographed me in it. Behind is a dusty graveyard. Billy is buried with two of his partners, Tom O'Folliard and Charley Bowdre, both killed by Garrett. The Chamber of Commerce has put an iron cage over the graves and bolted Billy's tombstone down with steel hoops, because it has twice been stolen. Garrett's first wife is here and also Pete Maxwell.

When asked about Billy in later life, Maxwell always said the same thing: 'The trouble with Billy that night was that he talked before he shot.' In the Authentic Life Garrett says he searched 'long and faithfully' for a spent round from Billy's gun and had to conclude that Billy had not fired. More than anything else, this admis- sion makes me like Garrett. Garrett was also murdered, but that's another story.

We spent the night in the Coronado motel, near the railroad. We were the only guests. I had half a pint of Jack Daniels. went out into the dark to the ice machine, but it was all frozen together and I had to go back for my knife. The baby was asleep in her mother's arms, so I took my shoes off. At the ice machine, I heard a footstep. I crouched down by the machine, and heard the step again.