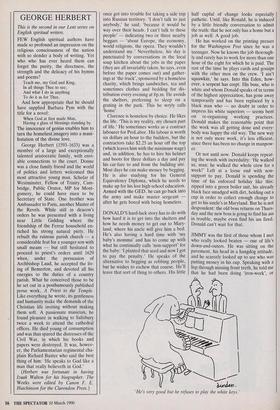 This is the second in our Lent series on English spiritual writers.

FEW English spiritual authors have made so profound an impression on the religious consciousness of the nation with so slender a body of writing. Yet who who has ever heard them can forget the purity, the directness, the strength and the delicacy of his hymns and poems?

Teach me, my God and King, In all things Thee to see; And what I do in anything To do it as for Thee.

And how appropriate that he should have supplied Barbara Pym with the title for a novel:

When God at first made Man, Having a glass of blessings standing by.

The innocence of genius enables him to turn the homeliest, imagery into a mani- festation of the divine love.

George Herbert (1593-1633) was a member of a large and exceptionally talented aristocratic family, with envi- able connections to the court. Donne was a close family friend and the world of politics and letters welcomed this most attractive young man. Scholar of Westminster, Fellow of Trinity, Cam- bridge, Public Orator, MP for Mont- gomery, he could have risen to be Secretary of State. One brother was Ambassador to Paris, another Master of the Revels. While still in deacon's orders he was presented with a living near Little Gidding where the friendship of the Ferrar household en- riched his strong natural piety. He rebuilt the ruinous parish church — a considerable feat for a younger son with small means — but still hesitated to proceed to priest's orders until 1629 when, under the persuasion of Archbishop Laud, he accepted the liv- ing of Bemerton, and devoted all his energies to the duties of a country

parish. What he conceived those to be he set out in a posthumously published prose work, A Priest to the Temple. Like everything he wrote, its gentleness and humanity make the demands of the Christian life inviting without making them soft. A passionate musician, he found pleasure in walking to Salisbury twice a week to attend the cathedral offices. He died young of consumption and was thus spared the distresses of the Civil War, in which • his books and papers were destroyed. It was, howev- er, the Parliamentarian regimental cha- plain Richard Baxter who said the best thing of him: 'He speaks to God like a man that really believeth in God.'

(Herbert was fortunate in having Jzaak Walton for his biographer. The Works were edited by Canon F. E. Hutchinson for the Clarendon Press.)