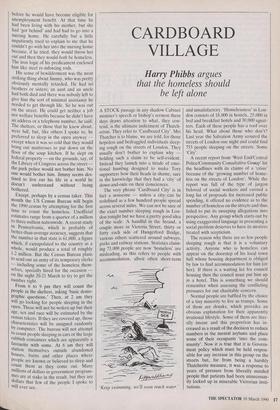 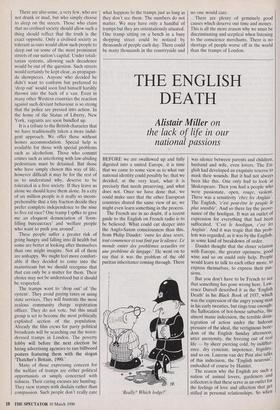 that the homeless should be left alone

A STOCK passage in any shadow Cabinet minister's speech or bishop's sermon these days draws attention to what, they con- tend, is the ultimate indictment of Thatch- erism. They refer to 'Cardboard City'. Mrs Thatcher is to blame, we are told, for those hopeless and bedraggled individuals sleep- ing rough on the streets of London. They usually don't bother to explain why holding such a claim to be self-evident. Instead they launch into a tirade of emo- tional humbug designed to make Tory supporters bow their heads in shame, sure in the knowledge that they had a 'city' of down-and-outs on their consciences.

The very phrase 'Cardboard City' is in fact a. nonsense — unless a city can be redefined as a few hundred people spread across several miles. We can not be sure of the exact number sleeping rough in Lon- don tonight but we have a pretty good idea of the scale. A handful in the Strand, a couple more in Victoria Street, thirty or forty each side of Hungerford Bridge, various others scattered around subways, parks and railway stations. Statistics claim- ing 73,000 people are now 'homeless' are misleading, as this refers to people with accommodation, albeit often short-term 'Keep swimming, we'll soon reach water.' and unsatisfactory. 'Homelessness' in Lon- don consists of 18,000 in hostels, 25,000 in bed and breakfast hotels and 30,000 squat- ters. Each of these people has a roof over his head. What about those who don't? Last year the Salvation Army scoured the streets of London one night and could find 753 people sleeping on the streets. Some 'City'.

A recent report from 'West End/Central Police/Community Consultative Group' hit the headlines with its claims of a 'crisis' because of the 'growing number of home- less on the streets of London'. While the report was full of the type of jargon beloved of social workers and carried a long list of proposals for increased public spending, it offered no evidence as to the number of homeless on the streets and thus failed to put its sweeping allegations into perspective. Any group which starts out by using exaggerated language in presenting a social problem deserves to have its motives treated with scepticism.

The reason why there are so few people sleeping rough is that it is a voluntary activity. Anyone who is homeless can appear on the doorstep of his local town hall whose housing department is obliged by law to find accommodation for him (or her). If there is a waiting list for council housing then the council must put him up in a hotel. This is something we should remember when assessing the conflicting pressures for our charitable concern.

Normal people are baffled by the choice of a tiny minority to live as tramps. Some of them are drunks, which provides an obvious explanation for their apparently irrational lifestyle. Some of them are liter- ally insane and this proportion has in- creased as a result of the decision to reduce numbers in the mental asylums and place some of their occupants 'into the com- munity'. Now it is true that it is Govern- ment policy which must be held respon- sible for any increase in this group on the streets but, far from being a harshly Thatcherite measure, it was a response to years of pressure from liberally minded people that patients had been unnecessar- ily locked up in miserable Victorian insti- tutions. There are also some, a very few, who arc not drunk or mad, but who simply choose to sleep on the streets. Those who claim that no civilised society should allow such a thing should reflect that the truth is the exact opposite. Only a civilised society as tolerant as ours would allow such people to sleep out on some of the most prominent streets of our nation's capital. Under totali- tarian systems, allowing such decadence would be out of the question. Such streets would certainly be kept clear, as propagan- da showpieces. Anyone who decided he didn't want to conform but preferred to 'drop out' would soon find himself harshly thrown into the back of a van. Even in many other Western countries the reaction against such deviant behaviour is so strong that the police are pressed into action. In the home of the Statue of Liberty, New York, vagrants are soon bundled up.

It is a tribute to the British character that we have traditionally taken a more indul- gent approach. We offer those without homes accommodation. Special help is available for those with special problems such as alcoholism. Those who commit crimes such as interfering with law-abiding pedestrians must be detained. But those who have simply chosen this way of life, however difficult it may be for the rest of us to understand why, deserve to be tolerated in a free society. If they leave us alone we should leave them alone. In a city of six million people is it really so incom- prehensible that a tiny fraction decide they prefer complete independence to the nine to five rat race? One tramp I spoke to gave me an eloquent denunciation of 'form- filling bureaucracy' and 'welfare people who want to push you around'.

These people suffer a greater risk of going hungry and falling into ill health but some are better at looking after themselves than one might imagine. Not all of them are unhappy. We might feel more comfort- able if they decided to come into the mainstream but we should recognise that that can only be a matter for them. Their choice may not be understood but it should be respected.

The tramps want to 'drop out' of 'the system'. They avoid paying taxes or using state services. They will frustrate the most zealous community charge registration officer. They do not vote, but this small group is set to become the most politically exploited section of the population. Already the film crews for party political broadcasts will be searching out the worst- dressed tramps in London. The poverty lobby will before the next election be hiring advertising agencies to run billboard posters featuring them with the slogan 'Thatcher's Britain, 1990.'

Many of those expressing concern for the welfare of tramps are either political opportunists or simply concerned with tidiness. Their caring excuses are humbug. They view tramps with disdain rather than compassion. Such people don't really care what happens to the tramps just as long as they don't see them. The numbers do not matter. We may have only a handful of tramps but they are ostentatiously situated. One tramp sitting on a bench in a busy shopping street could be noticed by thousands of people each day. There could be many thousands in the countryside and no one would care.

There are plenty of genuinely good causes which deserve our time and money. This is all the more reason why we must be discriminating and sceptical when listening to the conscience merchants. There is no shortage of people worse off in the world than the tramps of London.